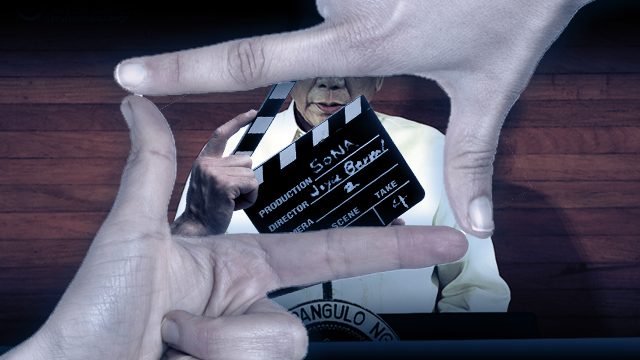 Imagine it with me.

The lights dim at the House of Representatives. Darkness coaxes all guests to fall silent. Music starts fading in gently, but it is not Freddie Aguilar’s Para sa Tunay na Pagbabago. We’re done with Freddie. Freddie is an election loser. This is not a SONA for losers.

A spotlight turns on. It sweeps across the audience as if searching for someone. It keeps searching, searching. Sino ba hinahanap natin? Finally, it stops on a surprising figure a few feet away from the podium. There, before everyone, is President Rodrigo Duterte – sitting hunched and frail in a wheelchair.

As the audience gossips, Bong Go steps into the spotlight. He helps Duterte stand up, and we see the President inch tiredly toward the podium, his hand gripping Go’s arm.

But then! The lights burst to full brightness! And the President! He wrests away from Bong Go and leaps to the podium with the litheness and exuberance of a 20-something! Survivor’s Eye of the Tiger thrusts through the speakers, and the audience goes wild!

Duterte stares right into the camera set up across the hall. We zoom into him and stop at a medium shot. He gives the camera the most triumphant middle finger the world has ever seen. Pak! Eto sa inyo!

I’m not sure what the exact script will say. Ang alam ko this will be written by Sal Panelo – you know he has a way with words. Very verbose. Very full of adverbs and adjectives. Very nosebleed. He can fill up 3 hours, no problem. I won’t interfere with his creative process.

Pero parang alam ko na ang kailangan for the AVP. First, a breathtaking drone shot of Boracay’s star-white sands, plus close-ups of local sun-browned kids smiling or laughing. Next, a barkada of college students walking around campus, studying, reciting in class, with the text “free tuition” ribboning out below them. And then after that, another drone shot, this time over our central business districts: Makati, BGC, Ortigas, with the text “highest investment grade” also ribboning out below, which is then followed by fast-forward footage of Build, Build, Build projects as they’re being constructed. As the penultimate shot, we pan across rows upon rows of shabu that have been confiscated by Customs or through buy-bust operations.

Finally, for our parting sequence, a dynamic CGI rendering of the President’s SWS satisfaction survey ratings, ending on a close-up of the arrow zipping further and further toward the upper right corner of the screen.

The AVP’s last frame crossfades into a static, long-playing beach scene. Then the men appear. All 22 of them, flown right in from Occidental Mindoro. The Gem-Ver crew. Once all fishermen are standing up front with the President, they all do the Duterte fist bump in unison – united in their courage – and the chorus to Queen’s We are the Champions barges in, loud and brash and magnificent.

Oh, my god, nakakaiyak. I get chills just thinking about it.

And finally, finally, in what I consider the piece de resistance, the move that I know will make this SONA talked about for years to come, the Chinese ambassador to the Philippines, Zhao Jianhua, stands up from his seat in the audience and walks up to them. He shakes hands with each and every fisherman, stands alongside them, and makes the fist bump as well.

We keep it this way for a few seconds. We let the audience get antsy. Ano’ng nangyayari? And then the lights burst back on, practically blinding everyone in brightness, and as they blink and squint and get their bearings, they will also have to do a double-take at the large, breathtaking mass that has magically appeared before them.

Totoo ba ‘to? Do their eyes deceive them, or is that…is that the Damen Fish Collecting Vessel 2308 with a fish hold capacity of 150 cubic meters and 580 kilowatt propulsion power?!?? Why yes, audience, yes it is! Mismo! And there, right on the prow, is its freshly-painted name – ano pa ba, but Gem-Ver II.

That’s right: A brand-new boat, one of the best commercial fishing boats money can buy, and it is right there inside the House of Representatives as a show of peace and goodwill from China to our beloved fishermen. It is all theirs, every inch of it. Libre na ng Tsina. These men will have nothing more to worry about for the rest of their lives.

The audience goes nuts. Raucous applause tears through the room like the next Yolanda. People are jumping from their seats, cheering. People are hugging. People are crying. Daig pa sa mga dati kong drama.

Let’s give the Philippines the show it deserves. – Rappler.com