Jan 22, 2012 1:43 PM PHT
Facebook Twitter Copy URL
Copied
The missing ingredient for a takeoff to achieve the 7-8% growth target is much higher levels of investment 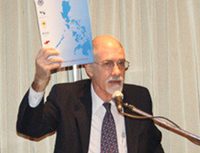 The latest SWS survey of poverty received positive headlines in the press last week with a percentage near the lowest in the 30 years that Dr. Mahar Mangahas has been asking his respondents whether they consider themselves poor.

But 45% of nearly 100 million is a lot of poor Filipinos, and the rate of population growth remains higher than the rate at which poverty is reduced, so the number of the badly-off keeps growing. Can it really be 45 million?

Apparently, that many Filipinos think so. Nothing to celebrate in this statistic.

Much higher rates of economic growth that create inclusive growth is the economists’ remedy to the challenge of poverty, along with government programs such as CCT, the lifeline electricity rate, the expansion of PhilHealth, and – very importantly – reforming basic education.

The Aquino Administration recognizes this in the Philippine Development Plan released almost a year ago. It sets ambitious yet doable goals – to double
GDP growth to 7-8%, to double exports to $110 billion, and to reduce the poverty rate by 50% (another doubling).

The 7-8% target is a very achievable target because this year, $20 billion in remittances will flow into the economy from the Filipino diaspora who seek work abroad because none is available at home. The 296 Filipinos who survived the Costa Concordia disaster in the Mediterranean are the country’s latest OFW
heroes. They not only keep the world’s maritime fleets afloat; they keep the Philippine economy afloat.

But a floating economy is very different from a flying economy. The missing ingredient for a takeoff to achieve the 7-8% growth target of NEDA is much higher levels of investment. Sustained for a decade or more, this will provide Filipino workers the choice, to stay at home or to work abroad.

Investment must come primarily from the private sector (unless inefficient state socialism is followed) and needs to grow far above its current level of 15%. Again twice as fast – 30% – is an excellent target.

Two years ago the leaders of the Joint Foreign Chambers in the Philippines (JFC), executives with substantial international business experience, committed themselves to prepare recommendations to enable higher investment and job creation. They prioritized what they call the Seven Big Winner Sectors:

Almost 300 Filipino and foreign investors then contributed their ideas in a series of 9 Focus Group Discussions organized by the JFC. The resulting
analysis and recommendations were bundled into a hefty 470-page book titled Arangkada Philippines 2010: A Business Perspective published in December 2010.

It can be read and downloaded for free at www.arangkadaphilippines.com.

This Thursday, January 26, the JFC will observe the first anniversary of Arangkada with a Forum themed Moving Twice as Fast. Almost 50 experts have
assessed the 471 recommendations made by the investors in a document to be released at the Forum. President Aquino will give the keynote talk with a
distinguished roster of speakers and moderators, including Rappler’s CEO Maria Ressa.