Aug 14, 2015 11:00 AM PHT
Facebook Twitter Copy URL
Copied
Do not let your talents go to waste by losing. Run locally, win, and set the example we sorely need. 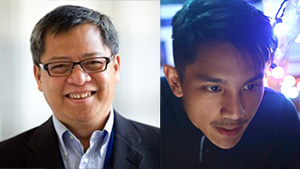 Count us as two of your admirers, who celebrate your many achievements in a corrupt and inefficient government. The fact that you were able to turn a lot of things around – the ARMM, the RH Bill, the overseas workers committee – shows how much you have done, and we predict, can do in the near future.

But we are also disturbed by stories that some of your followers believe that these accomplishments are enough to propel you to seats in national bodies come May 2016: the Senate in your case Risa and Mujiv, the presidency for you Walden.

This is wishful thinking.

As for the presidency, idealistic but unrealistic runs rarely prove a point, and are simply ridiculed. Witness the religious zealot JC delos Reyes.

For reformists to win in national elections, valiant runs are almost never enough. The process is, unfortunately, more painstaking and ground-up.

To put it more bluntly: you will lose, but only if you chose to aspire for these national posts.

It is another matter when it comes to local seats.

You and your supporters will expend fewer resources given the political geography you will be maneuvering in, and whatever you spend will be put to good use. Second, you are, as it were, in your home turf and, for Risa and Mujiv, you have no problem switching from English or Tagalog to the local argot. Third, you will know more people locally than nationally. Apart from the stump speeches, all you can do is shake hands in palengkes and town halls. More intimacy means being able to better explain your advocacies, while eliciting responses and additional queries. The necessity to act like clowns – from singing 80s power ballads to dancing hip hop – to gain voters’ attention will lessen as well.

Fourth, if you need to compromise with other forces, you will be doing so locally – less despicable characters to face, with your reformist zeal mitigating their intention to use the elections for patronage and spoils. “Tito” warlord or Ibu “war lady” will have second thoughts of betraying you because they are family friends; you may be even be an inaanak of one of them.

We know you are not oblivious to the fact that political power has historically been entrenched locally. But just to remind you: Gloria Arroyo “won” the presidency because of the Ampatuans and further back Marcos cemented his 1969 “victory” because of votes coming from Northern Luzon and Eastern Mindanao. Jojo Binay outmaneuvered the nationally-oriented Mar Roxas for the vice presidency, because his network of supporters consisted primarily of mayors and governors.

Trapos know the secret to electoral politics: the building of local bailiwicks. They slowly, but surely, entrench their hold by winning positions from konsehal upwards; this is why we live in a polity routinely labeled a “cacique democracy,” an “anarchy of families.”

Yet reformists, though complaining about trapos, routinely forget the secret to their success. They complain about local dynasties, yet they run nationally – a contradiction that should be above the most well-educated of our political actors.

The creation of a party-list system was a good thing, but it also coddled reformists, who began to project themselves in national elections and national coalitions, forgetting that other politicians were concerned about their backyards.

Fortunately, there have been some reversals to this trend. The Robredo phenomenon was centered in the locality of Naga, and it proved how a progressive mayor – one who focused on public services – could influence governance not only in his own city, but in other places as well.

Mayors affect people more directly than presidents or senators. For us, the more interesting development in the 2010 election was not the Senate race, but the mayoral race in Pasig, when Ricardo Reyes decided to take on the Eusebio dynasty. Like Risa’s run for the Senate, Ric’s run was also a failure. But it provided a blueprint for an anti-dynasty campaign strategy that may yet bear fruit.

What would happen if the leading lights of new politics in the Philippines – people like Ric – all decided to go home and contest mayoral, congressional, or gubernatorial seats? This could be a winning formula. In 2012, former Akbayan representative Kaka Bag-Ao returned to Dinagat and edged out the powerful Ecleo dynasty in a landmark congressional race.

The people who are humble enough to turn their backs on the glitz of national politics may not become famous, but they are the ones who make the most impact.

In the US, for example, Eugene Debs inspired many by running for the presidency five times (1900, 1904, 1908, 1912, and 1920). But the ones who really impacted people’s lives were those who were derisively called “sewer/gutter socialists” in Milwaukee – socialists who preferred the “gutter” of city councils as opposed to the unattainable White House. It was they who built Milwaukee’s healthcare, sanitation, and educational systems. Their impact is felt until today. Mayor Bo Daus of Laur, flies the Akbayan flag in the same spirit as the gutter socialists, and it is in his city that one can find the potential of a progressive party.

Do not let your talents go to waste by losing. Run locally, win, and set the example we sorely need. – Rappler.com

Lisandro Claudio is a concerned member of Akbayan