Jun 14, 2016 9:00 AM PHT
Rene Pastor
Facebook Twitter Copy URL
Copied
'Freedom of navigation is a cardinal principle of the US and it is the key reason why Washington would fight for the idea in the South China Sea or anywhere else in the world’s oceans' 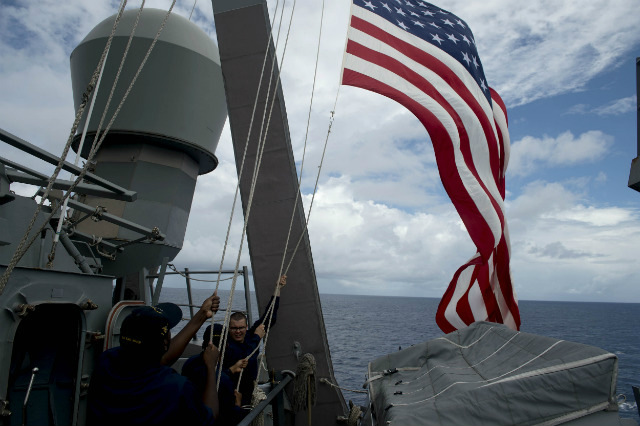 When the US confronts China in the South China Sea by having its warships sail within miles of military bases built on reefs or rocky outcrops by Beijing, the principle the US invokes first and above all others is freedom of navigation.

Most people have a rough idea what it means in its literal sense. But freedom of navigation is a cardinal principle of the US and it is the key reason why Washington would fight for the idea in the South China Sea or anywhere else in the world’s oceans.

This was then refined by the Dutch in the 17th century in negotiating bilateral treaties with other powers. The Dutch became the biggest trading power at that time, eventually seizing Indonesia from the Portuguese, so they found it ideal to be able to trade with everyone without their ships being caught in the crossfire between belligerent powers.

Essentially, the concept means “free ship, free goods” in that enemy goods cannot be violated when they are transported on neutral ships, unless they are war contraband.

This principle was summarized in the book Mare Liberum (The Freedom of the Seas) written by the Dutch jurist and philosopher Hugo Grotius in 1609.

“Every nation is free to travel to every other nation, and to trade with it,” Grotius wrote, adding this freedom to travel and to trade means the right of innocent passage over land and the same right over the sea.

He compared the oceans to the air in that “it is not susceptible of occupation, and second its common use is destined for all men.”

“For the same reason the sea is common to all, because it is so limitless that it cannot become a possession of any one, and because it is adopted for the use of all, whether we consider it from the point of view of navigation or of fisheries.”

The concept was opposed by coastal powers and this opposition seems to have found its way into the current dispute in the South China Sea.

Freedom of navigation is intricately woven though into the DNA of a trading power.

In 1856, the British eventually signed on to the principle and as the biggest naval and trading power of its day, freedom of navigation and the trade it brings into the coffers of the empire became a lynchpin of their system of colonies stretching from London to Hong Kong.

The United States, on the other hand, has long advocated the principle of free ship, free goods. The US did this in treaties it forged with France in 1778 and with the Dutch in 1782. Both were concluded within 6 years of the Declaration of Independence in 1776.

The navy played a critical role in the emergence of Britain as a major power. The same is true with the United States.

For the US, this naval tradition harks back to the War of 1812 with Britain.

“The Navy preserves its memories in the names of its ships; names of aircraft carriers made famous in World War II came down from the days of 1812,” wrote Eric Larrabee in his book Commander in Chief, Franklin Delano Roosevelt, His Lieutenants and their War.

Then you wed the concept of freedom of navigation with the ideas of Alfred Thayer Mahan in his seminal book The Influence of Sea Power Upon History, 1660-1783, and one could glean an understanding of the principles followed by the US in international waters such as the South China Sea or the Persian Gulf.

“The history of sea power is largely, though by no means solely, a narrative of contests between nations, of mutual rivalries, of violence frequently culminating in war. The profound influence of sea commerce upon the wealth and strength of countries was clearly seen long before the true principles which governed its growth and prosperity were detected,” Mahan declared.

He preached the primacy of control of the seas through a country’s navy and for trading powers like Britain and the US; a powerful navy became essential to their rise and preeminence as great powers.

Freedom of navigation is an integral part of US policy.

“US policy since 1983 provides that the United States will exercise and assert its navigation and overflight rights and freedoms on a worldwide basis in a manner that is consistent with the balance of interests reflected in the Law of the Sea (LOS) Convention,” the US State Department said in its Freedom of Navigation program.

“The United States will not, however, acquiesce in unilateral acts of other states designed to restrict the rights and freedoms of the international community in navigation and overflight and other related high seas uses.”

Given its long history as a core principle of the US, the policy pursued by Washington to reject any attempt by China to dominate what it sees as vital trade routes in international waters will never be accepted by Washington.

It does not clearly matter if the US has access to the bases it wants to use in the Philippines. The US will find a way to assert the sanctity of freedom of navigation. This can only be bolstered if the United Nations rules in favor of Manila in its arbitration case against China this month.

“The FON Program since 1979 has highlighted the navigation provisions of the LOS Convention to further the recognition of the vital national need to protect maritime rights throughout the world.”

“The FON Program operates on a triple track, involving not only diplomatic representations and operational assertions by US military units, but also bilateral and multilateral consultations with other governments in an effort to promote maritime stability and consistency with international law, stressing the need for and obligation of all States to adhere to the customary international law rules and practices reflected in the LOS Convention,” the State Department concluded. – Rappler.com

Rene Pastor is a journalist in the New York metropolitan area who writes about agriculture, politics and regional security. He was, for many years, a senior commodities journalist for Reuters. He founded the Southeast Asia Commodity Digest, which is an affiliate of Informa Economics research and consulting.