Time for a Ramos model in the West Philippine Sea?

Aug 6, 2016 5:00 PM PHT
Richard Javad Heydarian
Facebook Twitter Copy URL
Copied
Instead of opting for either a bilateral or multilateral approach, Ramos adopted what I call 'bi-multilateralism' in his administration's approach to China The year 2012 was not the first time that the Philippines lost a land feature in the West Philippine Sea to China. The shock of creeping Chinese intrusion into Philippine-claimed waters came much earlier, specifically during the presidency of Fidel V. Ramos.

With President Rodrigo Duterte appointing him as special envoy to China, it is important to understand why he is perhaps the perfect person to oversee a reconfiguration in bilateral relations.

Before delving into the grim strategic reality of the past 3 decades, however, let’s first discuss the time when the Philippines was among the most pro-active and ambitious claimant states. Throughout the latter half of the Cold War period, former president Ferdinand Marcos leveraged robust American military presence in Subic and Clark to push the boundaries of Philippine claims in the disputed waters.

Under the Marcos regime, the Philippines occupied even land features that laid way outside its 200-nautical-miles Exclusive Economic Zone (EEZ). The most precious one was the Thitu (Pag-Asa) Island: it was occupied by the Armed Forces of the Philippines (AFP) and soon turned into the first modern airbase in the contested waters. Obviously, this was not done without controversy or opposition.

Neighboring Southeast Asian countries like Malaysia and Vietnam, which have overlapping EEZs and/or continental shelves with the Philippines, were unhappy. Yet, they were too internally divided and too underdeveloped to challenge Marcos, who boasted the region’s most advanced armed forces, not to mention a colossus ally in America.

Marcos, a trained lawyer with a keen strategic mindset, realized that actual occupation of contested land features was the best way for the Philippines to stake its claim and maintain meaningful presence in one of the world’s most important waterways.

Marcos, who also had his sights on the Philippine-claimed (though Malaysia-occupied) Sabah, was so relentless in his maritime ambitions that folks at Washington began to worry about the late dictator using the long shadow of American military support as a carte blanche in adjacent waters.

As legendary American Foreign Secretary Henry Kissinger argued, in absence of international settlement, what matters is “[c]ontinuous, effective, and unconstested occupation and administration of territory”, but “[Philippine] occupation could hardly be termed uncontested in face of claims and protests of Chinese and Vietnamese.”

Americans feared that the Philippines would aggressively push the boundaries of its claims, precipitating armed clashes with neighboring countries, including American allies such as South Vietnam and Taiwan, and drag Washington into a region-wide maritime conflict.

As far as America was concerned, what mattered was not the territorial ambitions of its allies, but instead Freedom of Navigation (FON) in international waters. For this reason, America was always equivocal vis-à-vis the extent of its commitments to the Philippines in the disputed waters of South China Sea and West Philippine Sea.

The 1970s, however, were the height of the Philippines’ relative power ascendancy in the region. The following decade, a once-promising nation, after years of unsustainable borrowing and chronic bureaucratic corruption, fell into long-term decline.

By the early-1980s, Southeast Asia’s powerhouse fell victim to an economic breakdown, precipitating massive bail out by international financial institutions, and a political crisis, as opposition forces galvanized into a coherent revolutionary movement. The rest of the decade was dedicated to cleaning up the post-Marcos mayhem, as a combustible combination of coups, foreign debt, and insurgency almost tore the Philippines asunder.

By the time Ramos took over the Philippines, the country was a shadow of its mid-20th century days of glory, which peaked in the late-1960s. Ramos had to oversee the recovery of an emaciated nation, with a much-weakened military and a fragile economy racked by brownouts and collapsing basic services.

To make matters more challenging, for the first time in almost a century, a Filipino leader had to protect the country without American bases on Philippine soil. Ramos’ strategic conundrum was exacerbated by the fact that newly-prosperous post-Deng Xiaoping China was beginning to re-evaluate its position in the Asian pecking order.

With America and its allies focused on the Middle East, and (prematurely) touting a peace dividend in Asia, a dangerous power vacuum emerged in the region: American bases were out; Japan was stuck in a dangerous economic stagnation, while the Soviet Union fell apart, with a whimpering Russia emerging out of its ashes. This was the perfect opportunity for China to regain its ancient glory. 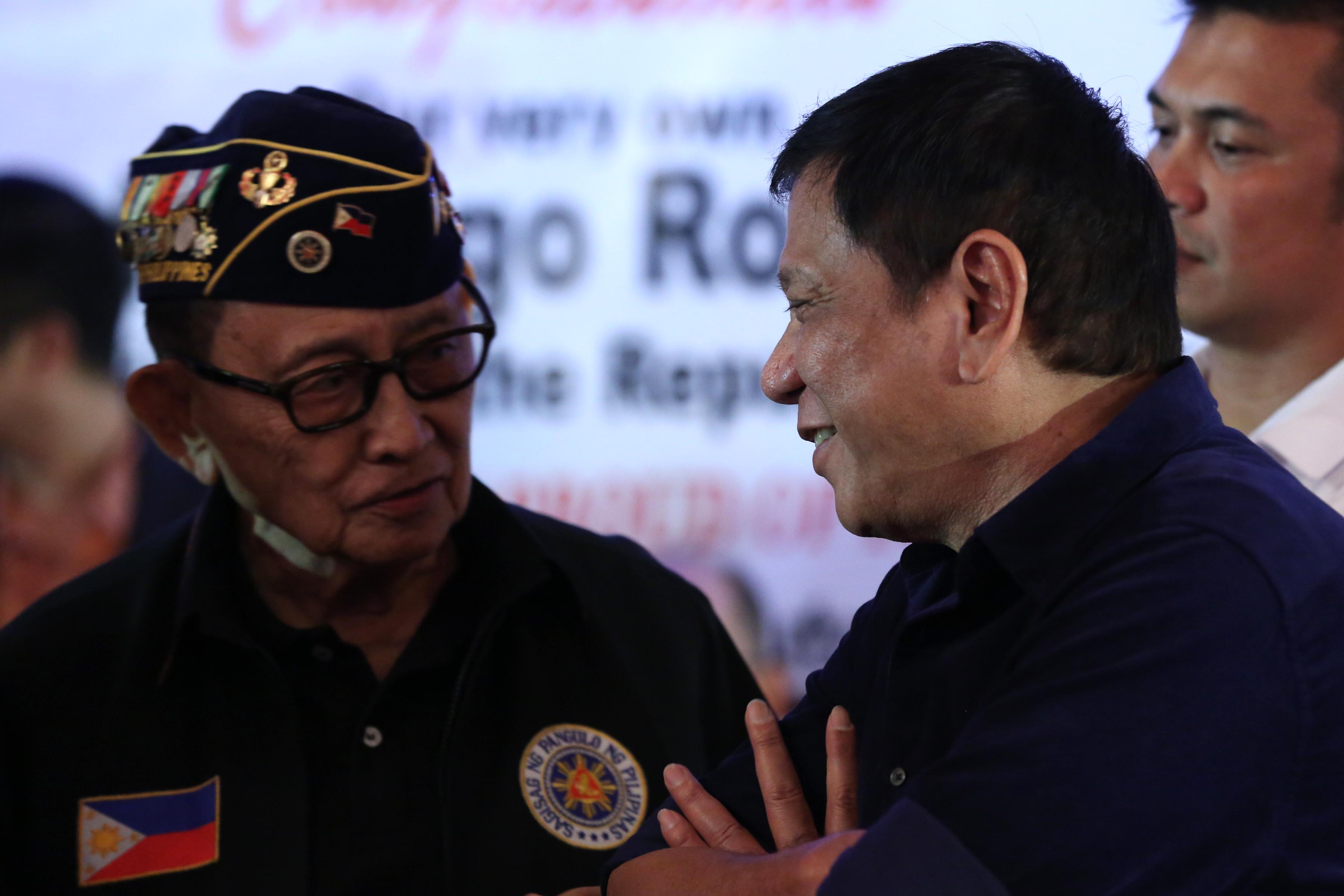 No wonder then, 3 years into office, the Ramos administration confronted the prospect of Chinese incursion into Philippine-claimed waters. In February 1995, the Philippines, which even lacked domain awareness, was cruelly jolted out of its strategic stupor when it discovered Chinese flags and rudimentary construction activities on Mischief Reef (Panganiban).

Unlike the Scarborough Shoal, which is a high-tide-elevation (rock), Mischief Reef is only a low-tide elevation. But still, the Philippines felt that this was nothing short of territorial aggression by Beijing.

So how did the Ramos administration respond? It considered neither confrontation nor capitulation Instead, Ramos adopted a 4-pronged strategic response to dent Chinese territorial ambitions, communicate the Philippines’ resolve, and alter the trajectory of the maritime disputes.

Initially, Ramos adopted a strong posture, considering various military options to check Chinese ambitions. The problem, however, was that he inherited an emaciated, insurgency-focused armed forces, which lacked the requisite military capability to ensure a swift and decisive victory. America also refused to extend any explicit assistance, since it adopted a neutral position on the territorial claim. After all, the reef was a low-tide elevation, which can’t even generate any sovereignty claim.

At the same time, Ramos realized that it was important to ensure overall bilateral relations with China are not defined by territorial disputes – in this case, a quarrel over a rock. Booming China was gradually transforming it into a major economic partner for other Asian countries. With China emerging out of the shadow of Mao, it was also important to “socialize” the juggernaut along regionally accepted norms. Direct confrontation ran the risk of altering China’s broadly peaceful trajectory along more troubling trends.

Instead of opting for either a bilateral or multilateral approach, Ramos adopted what I call “bi-multilateralism.” On the one hand, he immediately activated high-level dialogue to, at the very least, de-escalate tensions. War was not an option. And it was important to prevent China from further expanding its presence in Philippine-claimed waters or close to Philippine-occupied land features in the Spratlys (Kalayaan Island Group).

The following year, no less than the Chinese President Jiang Zemin visited the Philippines to discuss ways to manage territorial disputes and preserve a blossoming bilateral relationship. The flamboyant Chinese leader never lost a chance to win his host’s good will: Jiang even got to dance ‘Cha-Cha’ and sing Elvis Presley’s “Love Me Tender” during the visit.

Ramos, however, wasn’t fully convinced by Jiang’s charm-offensive. He also pushed for greater regional diplomacy, which culminated in the Association of Southeast Asian Nations’ (ASEAN) concerted pressure on China to sign the historic Declaration on the Conduct of Parties in the South China Sea (DOC) in 2002 under the Gloria Arroyo administration. Without a doubt, Ramos’ successors benefited from his earlier diplomatic efforts.

Recognizing the power vacuum left by the exit of American bases, Ramos also sought greater American assistance by overseeing the negotiation and eventual ratification of the Visiting Forces Agreement (VFA). The new agreement not only augmented America’s diminished military presence in the area, but also facilitated greater assistance to the Philippines’ armed forces. Yet, Ramos was not putting all his eggs in the American basket.

He also oversaw the passage and implementation of the Armed Forces of the Philippines Modernization Act to ensure the Philippines moves closer to achieving a minimum deterrence capability on its own.

For almost two decades, from 1995 to 2012, the Philippines and China were able to oversee expansion in bilateral ties, while practically freezing their territorial conflict in the West Philippine Sea and broader South China Sea. And Ramos, the most-travelled Philippine leader, was partly its architect.

As far as international perception is concerned, Ramos – who managed to recast the Philippines’ image as the new tiger cub in town until the 1997 Asian Financial Crisis wreaked havoc across regional economies – enjoys almost universal respect outside the country.

Ramos is largely seen as one of the great statesmen in Asia. Some even dubbed him as the Lee Kuan Yew of the Philippines. During a short chat with him last month, he quipped, it is instead the other way around: the legendary Singaporean leader was the “Ramos of Singapore.”

Now, Duterte is placing his eggs in the Ramos basket, hoping the former president has the wherewithal to once again solve the China puzzle in the West Philippine Sea. – Rappler.com

Richard Javad Heydarian is the author of Asia’s New Battlefield: The US, China, and the Struggle for Western Pacific (Zed, London).