Epicenters of fatalities in the war on drugs 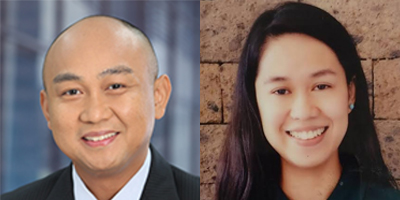 This article presents a very preliminary empirical analysis of the fatalities unofficially linked to the government’s anti-drug campaign during the period from 30 June to 18 August 2016.

It derives preliminary insights from patterns of media-reported fatalities. Hopefully, it will aid the public to better appreciate the complex landscape of the anti-drug campaign, particularly given the country’s decentralized system of governance. We hope it will also contribute to increased accountability across various police units and local governments, as they seek to suppress drugs while still protecting the rights of all citizens.

Nevertheless, the analysis here is preliminary because of several important caveats.

First, the data is drawn from media reports, yet we cannot ensure that all fatalities linked to the anti drugs campaign have indeed been covered by media. Second, this dataset is unofficial. More careful investigation could sharpen the final list of fatalities, since most are likely pending further investigation. This analysis is not meant to prejudge those outcomes. Third, the information on the context of some of the fatalities is very basic and clearly does not shed full light on the exact nuances of each case. For example, finding a salvage victim in NCR does not necessarily mean that is where the assault took place. Again, this analysis is not meant to prejudge all other possible angles for investigation.

40% of fatalities are not due to police operations.

We begin by classifying the fatalities into three main contexts:

Of those fatalities linked to police operations, we further disaggregate according to:

3) fatalities resulting from attempting to escape arrest; and

Figure 1. Distribution of Fatalities by Context 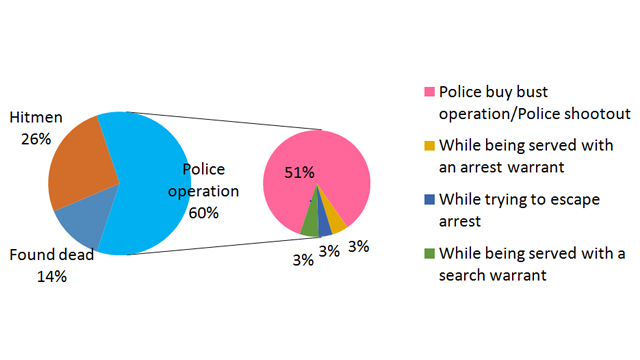 Some of the fatalities resulting from police operations are controversial, e.g. those resulting from alleged perpetrators attempting to escape arrest. They are around 3% of the total fatalities.

Table 1. Distribution of Fatalities by Context

Most fatalities are in Metro Manila and Cebu, but some provinces stand out because of fatalities not linked to police operations.

An analysis of the location of the fatalities points to some interesting patterns. We turn to figure 2 which shows the provinces/areas with at least 10 fatalities each; and figure 3 which provides a biplot statistical analysis of which fatality type is most associated with each province/area/city.

The biplot describes the patterns of associations among provinces and the context of the fatality. Provinces near each other in the graph have similar profiles. A province is associated to a particular context if it is plotted nearby the point represented by a specific context. (To say that two points are near each other, you have to draw lines from the center to the points of interest. If the angle formed is acute angle, they are associated, if it’s right angle – no association. The farther the two points from the center are, given that they are near each other, the stronger their association is.) Larger size of points in the graph means higher frequency (e.g. among the causes, highest count of fatality can be attributed to police operations).

First, Metro Manila has the highest number of fatalities, followed by Cebu, Bulacan, Quezon, and Pangasinan.

Figure 2. Provinces with at least 10 Fatalities 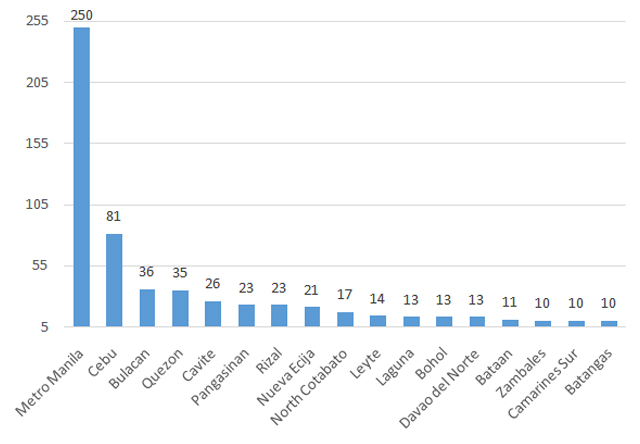 Figure 3. Biplot of Patterns Associated with the Fatalities Across Provinces/Areas/Cities 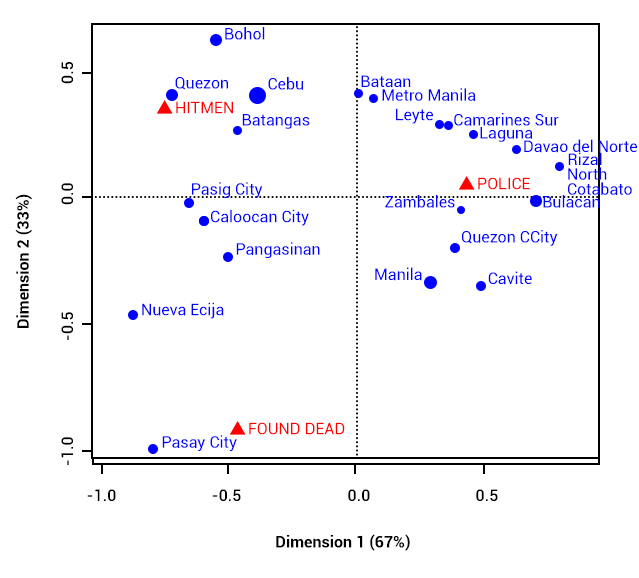 In Metro Manila, most of the fatalities are in the Manila Police District

Figure 4. Distribution of Fatalities in Metro Manila by City 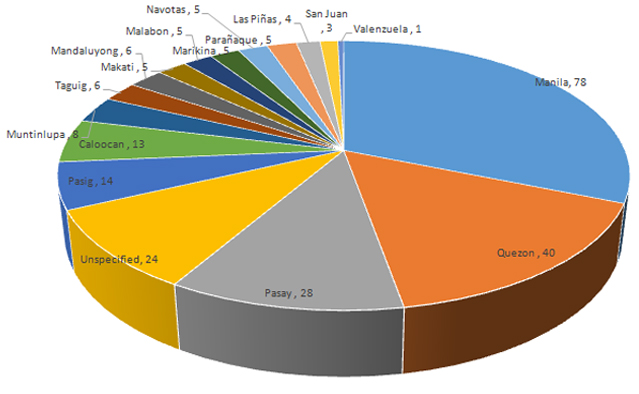 Figure 5. Distribution of Fatalities in Metro Manila by Police District
(Figures in terms of actual value and percentage) 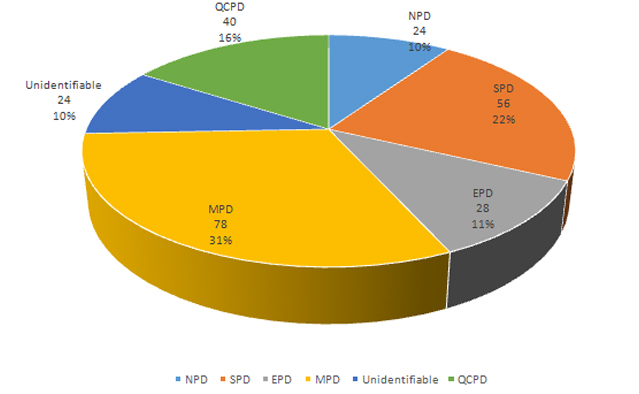 Table 2. Disaggregation of Fatalities by Type and Police District in Metro Manila

Fatalities due to police operations and shootouts are most prevalent in Manila and Quezon City Police districts. A large number of the “salvage” victims were found in Southern police district (SPD) (e.g. covering Las Pinas, Makati, Muntinlupa, Paranaque, Pasay and Taguig) and Manila police district (MPD). Victims of unknown hitmen are scattered across the different police districts. – Rappler.com

The views expressed in this article are the authors’ and do not necessarily reflect those of the Ateneo de Manila University. Ronald U Mendoza is the Dean of the Ateneo School of Government (ASOG); and Miann Banaag is a statistician with ASOG.