“I’ve realigned myself in your ideological flow and maybe I will also go to Russia to talk to [President Vladimir] Putin and tell him that there are three of us against the world – China, Philippines, and Russia. It’s the only way,” Mr Duterte said [to his Chinese hosts].

President Duterte has said many outlandish things. None as wild as this. “The three of us against the world”? It’s a good thing the Chinese want something from him, so they have not let their guffaws out into the public. “I’ve realigned myself in your ideological flow…” No wonder Senator Trillanes IV thinks he’s a closet communist. Bobby Garcia thinks a Trump victory would complete the “Four Horsemen of the Apocalypse.”

The other quote – “I announce my separation from the United States. Both in military, not maybe social, but economics also. America has lost.” – is pure outer space. His poor spokespersons are tearing their hair. They will soon be as bald as Justice Secretary Vitaliano Aguirre II. They will have to learn Michael Jackson’s “moonwalk” from all the backtracking they have to do.

There has to be logic to this somewhere. Duterte dislikes the United States. Maybe he’s reliving his “US-Marcos Dictatorship” college days. Maybe he wants to please his CPP friends, though I don’t agree with Senator Trillanes that he’s a communist. They have their own separate political inanities. Maybe he was denied a US visa at some point.

The US and China

Duterte is so preoccupied with President Obama that he has clearly not stopped to think about the next US president. Incoming President Hilary Clinton was one of the main designers of Obama’s “pivot to Asia.” She is more hardline on foreign policy. Clinton is not going to be happy with the removal of one of the main pillars of the “pivot.” The Philippines is geographically central to the strategic confrontation between China and the US.

The joint naval patrols in the West Philippine Sea and the joint military exercises are vital expressions of American strategy. US naval forces in the area, most importantly in aircraft carriers, provide military superiority that the Chinese will not be able to match in many years.

Chinese military outposts in reclaimed islands in the area are vain attempts to counter the US advantage from its position in the Philippines and in naval strength.

China’s “nine dash line” is audacious military strategy. Assuming that the US is a declining military power, China wants to hasten the process by staking out a position (the claim and the military outposts) and challenging the US to respond. Joint naval patrols with the Philippines, maybe later with Vietnam and Japan, together with sending warships close to reclaimed islands are responses short of outright military confrontation. 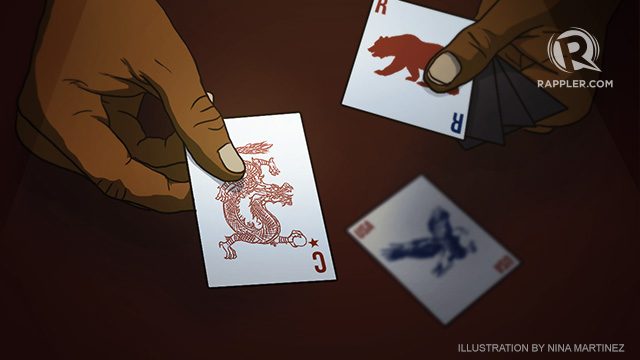 China’s long term strategy is even more audacious. They want military control over vital sea lanes through which US$5 trillion in trade pass per year. This is a problem not just for international trade. If they succeed, China would have a stranglehold on Japan’s survival as a nation. The smaller, less powerful countries of Southeast Asia, including the Philippines, would end up being vassal countries.

US political strategy is based on support for the territorial claims of Malaysia, Brunei, Vietnam, the Philippines and Indonesia which run counter to China’s claims. The US cannot make territorial claims in the area. It needs the claims of Southeast Asian countries to counter that of China. Its military projection is in support of freedom of navigation and international rules on territorial claims (UNCLOS), in this case represented by the decision of an arbitral tribunal in The Hague.

Duterte’s “pivot to China” is a major victory for China. If Duterte follows through on his threat to end joint naval patrols with the US, and denies the US an advance logistical outpost in the region, it would be a setback for US strategy.

Does Duterte understand the strategic implications of his words? Is this what he wants, or is he just sounding off and hoping to get loans and projects thrown into the bargain?

Duterte has tried to back off from his extravagant claims upon his return, but the damage is done.

We have to stop making excuses for his intemperate language. He has to be made to account for what he says. Does he even know the meaning and the repercussions of his anti-US and pro-China statements? Does he realize that the only thing standing in the way of China’s ambitions in Southeast Asia is American military might?

One does not have to be pro-US to understand the nature of the strategic confrontation in the West Philippine Sea. The other Southeast Asian claimants have succeeded in remaining equidistant from China and the US even as they pursue their claims and criticize Chinese aggressiveness. In the year when the Philippines chairs ASEAN, we might end up being perceived as a Chinese stooge the way Cambodia under Hun Sen is.

Can Duterte look beyond the loans and projects dangled before his eyes by the Chinese? Does he remember what happened when President Arroyo tried what he is now doing? To the Northrail project and NBN-ZTE? Duterte has poor, small time drug pushers killed. He licks ass with the country that, by his own admission, is the main source of shabu. Does he think the Chinese will back off from the nine dash line? What will Duterte do if/when the Chinese build a military outpost in Scarborough?

It’s not that Duterte is ignorant. He has enough members of the Cabinet who knows what’s what. He is imposing his personal likes and dislikes, his hang-ups on national government policy. He can’t even get these things implemented because they can’t, because his own people will refuse.

The result is confusion, no policy. We have become the laughing stock of the world. In the end, our biggest problem is that our President is, plain and simple, incompetent. – Rappler.com