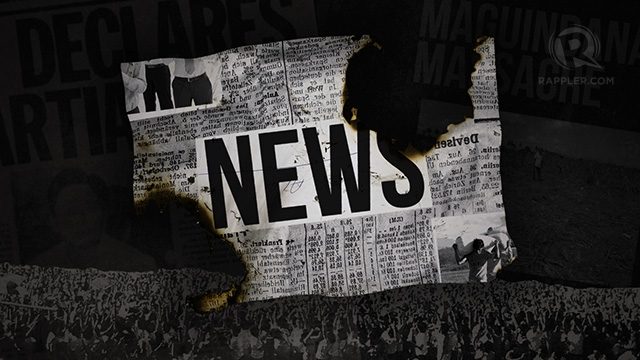 Facebook Twitter Copy URL
Copied
It is tempered rage, inspired idealism, and a firm anchor that sustain journalists through the toughest and most trying of times

Many decades ago, I already knew I wanted to be a journalist. I wanted to write, capture in words critical, historic events, and describe as best I could important people who were making a difference, if not charting the future of the country.

I whizzed past the turbulent 70s with little understanding or appreciation of what was going on at the time. I remembered images on television of demonstrations that turned violent, recalled hearing words like Molotov cocktails, placards, tear gas and truncheons associated with the helmet-clad Metrocom. But they were distant threats.

I didn’t grasp the reasons for the political upheaval then. But I felt a slight sense of unease – like how an unmet deadline or an unfinished story disturbs you and does not go away until you deal with it.

Maybe it wasn’t intense enough to rock me from my comfortable corner as a young student buried in books and the more mundane requirements of academic life. It wasn’t until the 1980s when I got a better handle on the nagging, undefined feeling of something not being all right.

The rallies came closer to home even as education sessions that helped make sense of social inequality and the nuanced political spectrum in the country nudged me from my perch. The earlier images from youth merged with the more current pictures of unrest, and wove a newfound understanding of what was wrong then and in the present.

Some say that activism begins with the question “why”, is fueled by a strong sense of purpose, and is cemented by courage.

Rage, idealism, and the desire to do what is right and just, fan the flames of activism.

Then I understood that activism and courage could be manifest not only in the streets and noisy rallies, but even in stories that can rouse anger, passion, and action. I became a journalist by choice.

Each and every day, journalists keep a close watch on those elected to public office – the powerful and the mighty who have all State resources to themselves. We keep watch day in and day out, keep our ears to the ground, persevere with the dreariness and predictability of routine.

We watch out for excesses and abuses that lull and entrench the powerful and make them forget about why they were chosen by the majority to lead. We alert about threats to personal freedoms and try our best to listen and lend a voice to those without one. We strive to report what is true and abhor propaganda and propagandists.

We do not always succeed because sometimes truth is as elusive as finding your shadow in the dark. You have to wait until enough light is cast to make out shapes – even in the dimmest of lights. Not everything is crystal clear each and every day but we strive to capture what we can in reports, narrations, stories, and analyses.

No two days are completely alike in our profession but we keep on trying to do better than the day before. Our age-old mantra: you are only as good as your last story.

Some idealistic and upright journalists have been killed, if not harassed in the course of their work. They who bring honor to the craft and the profession, we salute and are infinitely proud of. They who bring shame and disgust, we would love to banish to the ends of the earth.

Not everyone understands the job of journalists. Even some of our family members don’t – when we spend hours hunched over our laptops and gadgets, miss meals, dates and holiday get-togethers, court danger and try to get by with a few hours’ sleep. It is difficult to explain for it does not always make sense.

But purpose, focus, and commitment to stay the course in journalism speak of a quiet but solid type of courage. It need not be boastful, outlandish, arrogant, condescending or even boisterous. It is tempered rage, inspired idealism, and a firm anchor that sustain journalists through the toughest and most trying of times.

Why choose journalism at a time when almost anyone can claim to be a journalist? Because authentic journalists will stubbornly outlive the fraudulent ones. – Rappler.com