Donald Trump’s win has shocked the world, and the Philippines will inevitably feel the consequences one way or another.

Of course, based on our own experience, election winners do not necessarily stick to their campaign promises. But drawing from Trump’s pronouncements thus far, there seems to be 5 key areas where Filipinos could be affected the most.

Donald Trump espouses a protectionist worldview that runs across many of his policies, such as immigration. For instance, he has promised to “bring jobs back to the United States” and go after the 10 million or so undocumented immigrants who have “stolen” such jobs.

These statements are bound to rattle ethnic minorities in the US, including the nearly 4 million Filipinos currently living there, who account for about a third of all Filipinos abroad.

Although most of them are documented, racist attitudes coming from Trump himself could make daily life harder for Filipinos there in the form of discrimination and exclusion. (READ: Trump tags 9 countries, including PH, as ‘terrorist nations’)

OFWs seeking to enter the US to find job opportunities – even the highly skilled ones – may also have to look for alternative destinations once US immigration policies begin to tighten.

All these suggest that the flow of OFW remittances could be compromised. Donald Trump once proposed to “impound remittance payments derived from illegal wages”.

The inflow of OFW remittances has slowed down in recent years, and today they account for just around 10% of GDP (Figure 1). But as much as 43% of such remittances come from the US. Hence, if Trump’s immigration policies push through, the role of remittances in buoying up the Philippine economy could further diminish. 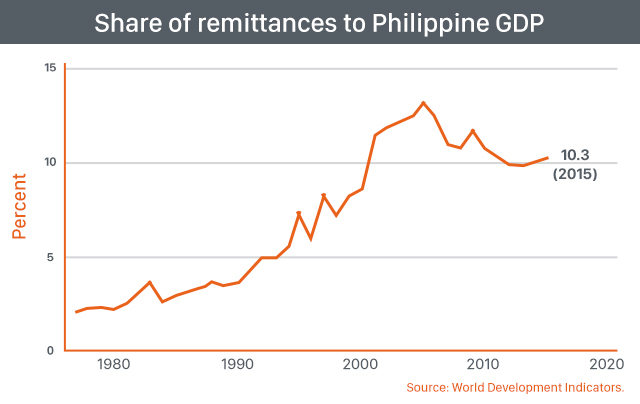 Donald Trump has repeatedly claimed that Americans are “losing their jobs” to other countries, and promised to punish firms which will outsource their operations abroad.

This could spell disaster for the Philippines’ outsourcing industry, especially since around 70% of its earnings come from the US.

For the longest time the business process outsourcing (BPO) industry has served as one of the Philippine economy’s bright spots. It has created many high-paying jobs for our young professionals and earned dollars for the economy in a way that is even starting to overtake dollar earnings from remittances. But with Trump’s win, some economists claim that this industry “could suffer”.

Moreover, by saying that he would “start building…things in [the US] instead of in other countries”, Trump envisions an increasingly self-sufficient and isolationist America, preferring to keep investments in the US instead of out. A weaker outflow of long-term direct investments from the US, still the world’s largest economy, could stifle growth in the developing world.

Donald Trump views global trade as a “zero-sum game”: countries have to compete with each other since winners always win at the expense of losers. For instance, because of China’s alleged currency manipulation, Trump has vowed to impose a retaliatory 45% tariff on Chinese imports.

But such zero-sum thinking is completely at odds with one of the most basic lessons in economics: international trade can make every country in the world better off. Restricting trade – in the form of, say, prohibitive tariffs or quotas – generally reduces the welfare of people around the world. 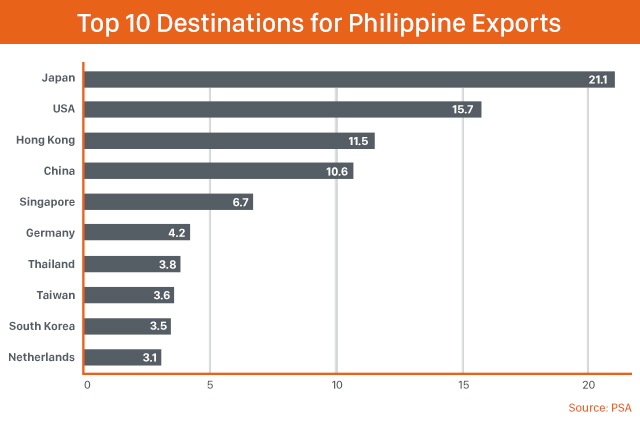 Trade deals, both old and new, also seem to be in jeopardy. Trump’s rejection of the Trans-Pacific Partnership – although it admittedly has its flaws – could promote a general skepticism of trade deals and disrupt the integration efforts of countries like the Philippines.

Overall, a slowdown of US trading activity borne by Trump’s protectionist policies could derail global trade, which has already decelerated in recent years. One could only hope that Trump’s business acumen – if any – kicks in and makes him realize that a policy of “blanket protectionism” will prove unprofitable for a vast majority of American businesses in the long run.

Trump’s win is also a veritable game-changer when it comes to the Philippines’ claims in the West Philippine Sea.

In contrast to Obama’s “rebalancing” strategy in Asia-Pacific, there is now doubt whether Donald Trump will show a similar degree of interest in the region. Hence, with less US “interference”, China could now flex its muscle more in the region.

With US support now uncertain, fellow claimants to the West Philippine Sea could decide to swing China’s way. In this sense, President Duterte’s recent pivot to China – although by no means is he a master strategist – almost seems like a prescient move that anticipated Donald Trump’s win. At the same time, it appears that President Duterte wants to repair ties with the US, and has recently expressed his willingness to work with Trump.

So could the Philippines cozy up to both the world’s economic superpowers? It’s hard to tell, but there’s no doubt that Trump’s win complicates our strategy when it comes to the West Philippine Sea.

Finally, despite the global evidence and consensus, Donald Trump doesn’t believe in climate change, and even maintains that global warming is nothing but an “expensive hoax”.

No wonder people all over the world are wary that Trump’s win could spell climate disaster for the entire world. In particular, America’s lukewarm stance on climate change could set the tone for climate change initiatives worldwide and impede their momentum.

Numerous studies have shown that the Philippines is one of the countries most at risk and vulnerable to the effects of climate change. The impacts range from more frequent extreme weather events, rising sea levels, ocean acidification, and loss of biodiversity. Hence, the Philippines could easily find itself at the receiving end of Donald Trump’s dangerous and utterly misinformed stance on climate change. 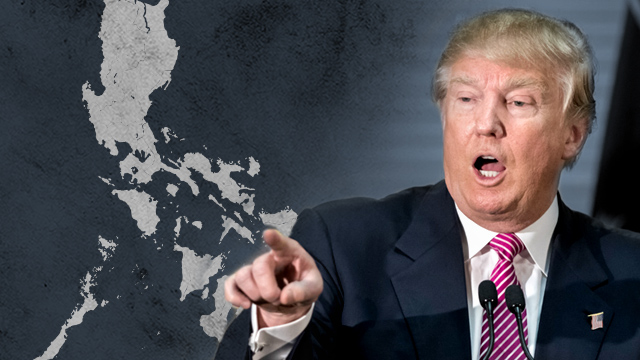 This past week – November 6 to 12, 2016 – has been especially rough for Filipinos all over the world.

What with the Supreme Court’s decision regarding Ferdinand Marcos’ burial and Donald Trump’s historic win, this week will be remembered as the week liberal and democratic values were tested to their limits and, unfortunately, beaten to a pulp.

But between these two recent issues, Donald Trump’s presidency sets the stage for future (and potentially lasting) economic hardships for Filipinos across the globe.

Perhaps now all we can do is to accept this new reality and brace ourselves for the uncertain 4 years ahead. Or, we can just hope that Trump magically forgets all the populist and protectionist statements he made during his campaign. – Rappler.com

The author is a PhD student and teaching fellow at the UP School of Economics. His views are independent of the views of his affiliations.