Traffic congestion seems to have worsened more than a year since my original “Carmaggedon” piece here on Rappler. Today even the ordinary trip to the grocery or mall has the potential to become a living nightmare.

In response, many people have proposed various solutions to our traffic problems. One of the most common we hear is the need to build more roads to accommodate the growing number of vehicles.

Indeed, the Duterte administration plans to embark on major road infrastructure projects, including strategic expansions and linkages. The private sector is taking action as well: for instance, the builder of NLEX is already undertaking a massive road widening project costing P2.6 billion.

Whenever we drive or ride a vehicle, we pay a price. We pay not only explicit costs like fuel or tolls, but also implicit costs in the form of money we lose by not working or relaxing. In other words, we also pay the “opportunity cost” for our travel time.

Back in 2013, JICA estimated that the total explicit and implicit costs of Metro Manila traffic amount to P2.4 billion daily. If we do nothing to solve this, such costs could swell to P6 billion daily by 2030.

New roads or highways, however, reduce the costs of driving. They make more room for vehicles, relieve traffic, and decrease fuel spending. They also reduce travel time and, hence, its opportunity cost.

But whenever the price of something goes down, we almost always purchase more of it. This “law of demand” applies not only to goods like coffee and movies, but also to driving.

For example, why would young professionals ride the crowded MRT when, because of wider roads, driving becomes much more comfortable and affordable? Or, why live in a crowded apartment near work when one can just buy a car and drive home to one’s family every day?

The same argument applies to leisure driving. For instance, the opening of TPLEX (Tarlac-Pangasinan-La Union Expressway) has cut travel time to Baguio from 6 hours to 4 hours, making it easier and more convenient for families and friends to go on road trips and spend weekends there.

Hence, new roads could induce people to buy cars or take more road travels than they otherwise would. When most people think this way, then the construction of new roads could actually lead to more traffic volume and congestion, rather than less.

Among transportation experts, this phenomenon is also known as the “induced demand effect” or the “fundamental law of highway congestion“, and this has been validated by numerous studies.

In the US, one prominent study found a clear and robust relationship between the creation of highways and traffic flow in several US cities: “The extension of most major roads is met with a proportional increase in traffic.”

Another recent paper summarized the extant literature on induced demand. It found that, on average, “a [road] capacity expansion of 10% is likely to increase [traffic flow] by 3% to 6% in the short-run and 6% to 10% in the long-run.”

The paper also confirmed that the net increase in traffic flow originates not so much from vehicles which transferred from older and slower routes into the expanded roads, but instead from the addition of new vehicles on the road. 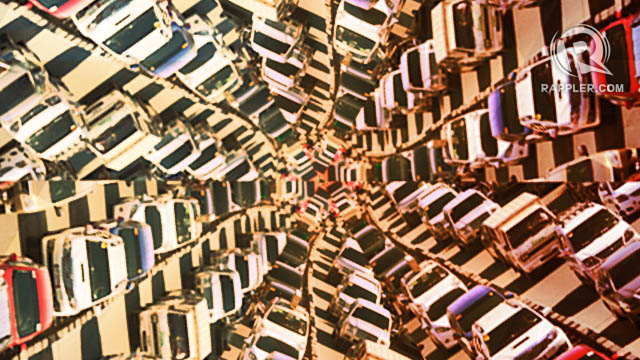 Lessening our dependence on cars

If building more roads could potentially cause more traffic, what alternative strategies can we resort to?

First, as a converse to the “induced demand effect”, some studies suggest that reducing road capacity may actually prove beneficial for motorists, in particular, and society in general.

The idea is to reduce our dependency on cars and make our cities more pedestrian-friendly rather than car-friendly. Certain cities in Europe and the US have already closed off their central business districts to vehicles altogether, with wide-ranging benefits in terms of congestion and pollution.

But even if buses and trains are a more compact way of moving people, some studies show that they do not reduce road traffic significantly. Additional capacity induces people to take more bus and train rides than they otherwise would – the induced demand effect all over again.

Third, we could make road users pay for the congestion they cause unto all other motorists. Such “congestion pricing” has, in fact, been successfully implemented in many parts of the world.

For example, when Singapore implemented congestion pricing back in 1975, it resulted in an immediate drop of traffic by 75%. Today, the system’s electronic version earns an average net profit of $US40 million annually, which the Singaporean government uses to fund road improvements and other forms of public transportation.

Finally, perhaps we should expand our horizons and look deep into the future of transportation.

Rather than just building more roads, we should start thinking about the prospect of self-driving cars, inter-vehicle communication, and intelligent road networks in Metro Manila and other urban areas – no matter how farfetched these technologies may sound today.

A knee-jerk proposal to solve our daily Carmaggedon woes is to build more roads to make room for the growing number of vehicles.

But the evidence suggests that simply building more roads (or widening and expanding existing ones) will never be enough. Instead, they could actually cause more traffic by inducing people to purchase more vehicles and take more trips than they would otherwise take.

To be sure, we’re not saying that the government’s infrastructure plans are out of place. The Philippines is lagging when it comes to public infrastructure spending, and we should definitely ramp it up nearer the international benchmark of around 5% of GDP.

Instead, we should bear in mind that some types of infrastructure investments work better than others in solving congestion, and we should prioritize them accordingly. Planners should take into account the unintended consequences of building more roads and ask: “How many more vehicles will be added to the streets if we construct more roads?”

By answering questions such as this, we can overhaul our urban landscapes to accommodate our rapidly growing population. This is especially important since, for the first time in our history, more than half of all Filipinos are projected to live in urban areas in the next few years. – Rappler.com

The author is a PhD student and teaching fellow at the UP School of Economics. His views are independent of the views of his affiliations. Thanks to Kevin Mandrilla for valuable comments and suggestions.