President Duterte’s election into office has singlehandedly caused several changes in the political and social landscape. In just his first 6 months, the President managed to initiate a bloody and controversial drug war, pivot the country toward China and Russia, and show his all-out support for the Marcoses amid numerous angry protests nationwide.

Abroad, the surprise vote on Brexit, the shocking win of US President-elect Donald Trump, and the slowdown of global trade all seem to herald the arrival of a new era of global populism, demagoguery, and protectionism.

But in this year-ender article we look back at 2016 through a very specific lens: the performance of the Philippine economy. How did our economy perform in the past year? How does that performance compare with previous years? And where is our economy headed?

In what follows, we explore 5 key aspects of the economy and explain in each what happened (as shown by the data), and what we should look out for in 2017.

Throughout, keep in mind that one should be cautious in attributing the economy’s recent changes to the different administrations. Many such changes may be due to policies or events that took place many months or years ago. What happened: The country’s GDP – or the value of total output – recorded an impressive growth rate of 7.1% as of October 2016 (see Figure 1). This made the Philippines the fastest-growing emerging economy in Asia as of the third quarter of 2016 (even beating China’s 6.7%).

GDP growth has, in fact, been continuously rising since 2015, albeit at a decreasing rate. This sustained growth is impressive, given the general slowdown of global economic growth.

Moreover, much of recent growth is accounted for by our predominant services sector (which includes retail trade, banking, transportation, etc). But the data also show that the manufacturing sector has been explaining an increasing part of growth in recent quarters.

Where are we headed: High growth is meaningless if it only benefits some income classes and not others. Some argue that manufacturing remains one of the best ladders by which we can bring faster and more inclusive growth. But to sustain the growth of manufacturing investments, we need to further reduce the cost of doing business in the country and strengthen the inflows of high-tech foreign direct investments.

The President himself can significantly boost the attractiveness of doing business in the country by shunning a “zero-sum” view of global trade and reducing his tough talk with our key trading partners. (READ: Duterte’s tough talk and what it could mean for US, EU investments)

2) Prices have experienced a slight uptick What happened: The inflation rate – which measures the general rise of prices – saw a record low of 0.4% in October 2015. But since then inflation has risen to 2.5% as of November 2016 (see Figure 2). Despite this uptick, this year’s inflation rate is still within the government’s target of 2 to 4%.

This oil price hike is made worse by the peso’s steady depreciation against the US dollar, which makes it more expensive for Filipinos to import commodities. Although prices are seen to accelerate further next year, we must remain confident that the Bangko Sentral will do its best to combat runaway inflation.

3) Unemployment and underemployment continued to go down What happened: At just 4.7%, the country’s unemployment rate last October is at its lowest since the definition of the “unemployed” was changed in 2005 (see Figure 3). Meanwhile, the underemployment rate – which comprises those with work but still need or want more work – is also on a general downtrend despite an uptick from July to October.

Where we are headed: We need to create around 9 to 10 million jobs to solve both unemployment and underemployment. Indeed, we need not just more jobs but better-quality jobs. This can be done by further promoting entrepreneurship, attracting more investments into the country, and dissuading long-term investors from leaving the country (particularly BPOs and other outsourced businesses). (READ: BPOs need to ‘level up’ as protection against Trump – NEDA)

4) The peso depreciated significantly against the US dollar 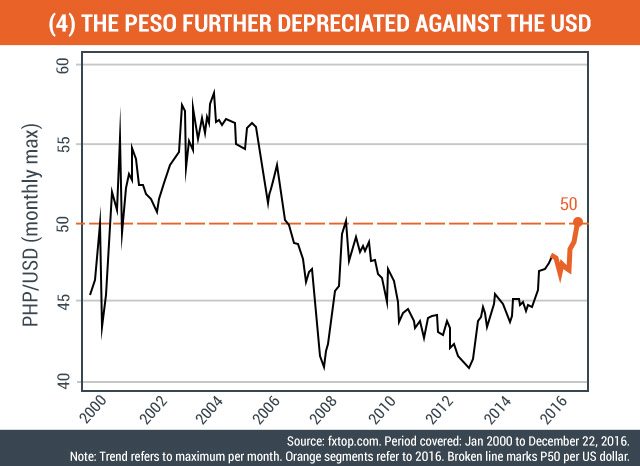 What happened: One of the most headline-grabbing economic news in 2016 is the sharp depreciation of the Philippine peso against the US dollar, especially in the latter half of the year. In late November the nominal exchange rate again hit P50 per US dollar (see Figure 4). The last time we reached this territory was in November 2008, or more than 8 years ago. This trend has made life easier for dollar-earning sectors of the economy (like exporters and families of OFWs) and harder for dollar-spending sectors (like importers).

Where we are headed: As I explained in a previous Rappler piece, the peso’s steady depreciation seems to stem from an expectation of higher interest rates in the US that led to a sell-off of domestic assets and capital flight. Nevertheless, the government’s economic managers note that the peso’s depreciation is in line with the movements of regional currencies. But should further US interest rate hikes happen, the Bangko Sentral stands ready to prevent excessive foreign exchange volatility. (READ: BSP to intervene if there’s too much forex volatility)

5) The stock market rallied till midyear, then slumped What happened: Finally, the Philippine stock market index displayed a mixed performance this year. There was a steady rally in the first half of 2016, followed by a slump in the latter half (see Figure 5). Again, this can be largely attributed to the massive foreign sell-off of stocks owing to the anticipated interest rate hike in the US.

Where we are headed: Insofar as the stock market index is often taken as a barometer of future business conditions, there is a need to improve impressions of doing business in the country. Truly, there’s little to be done about movements in global markets which also affect businessmen’s confidence. But it will help if the country’s leadership projects an image of safety, peace, order, and stability (rather than violence, lawlessness, and uncertainty). (READ: PH stocks dip over security concerns, ‘political uncertainty’) 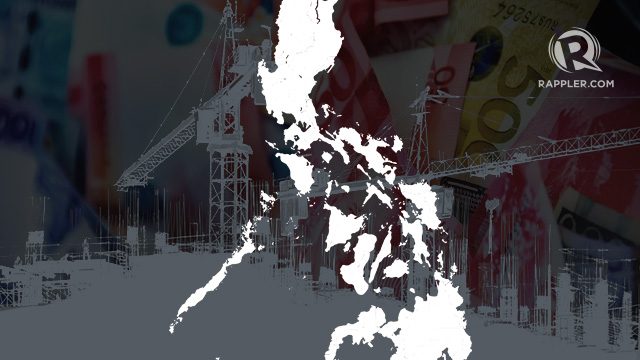 Conclusion: Let’s sustain and guard our economic gains in 2017

Amid the turmoil that is 2016, the Philippine economy has proven robust enough to weather the many tectonic shifts that occurred here and abroad.

But as we enter 2017, we need to sustain our economic gains and guard them against further social uncertainties and political unrest. There are at least 3 ways to do this.

First, let’s demand from our leaders sound, evidence-based, and consistent policies that will continue the growth momentum, keep prices low, and create more and better jobs.

Second, let’s also demand that our leaders remove the atmosphere of fear, violence, and lawlessness that currently prevails across the nation. Not only does this disrupt economic activity in our daily lives, but it also makes doing business in the country less attractive.

Third, in this so-called “post-truth” era – where public opinion is dictated more by emotion and belief than facts and data – we need to raise the level of social discussion and engagement by promoting more responsible production and consumption of information and news.

Only by doing so will we Filipinos inoculate ourselves and our economy from the rising tides of populism, misinformation, and ignorance spreading throughout the world. – Rappler.com

The author is a PhD student and teaching fellow at the UP School of Economics. His views do not necessarily reflect the views of his affiliations. Thanks to Kevin Mandrilla (UP Asian Center) and Charmaine Crisostomo (UP School of Economics) for valuable comments and suggestions.