The Maute Group and rise of family terrorism Though Philippine government forces are actually fighting in Marawi City a unified armed groups that have pledged allegiance to the Islamic State in Iraq and Syria (ISIS), the group that inevitably stands out in the ongoing military conflict is the Maute Group.

The Maute Group is brazenly taking the center stage in the ongoing firefights because the main battlefield is Marawi City, the stronghold of the Maute family and the only Islamic city in the Philippines. This armed group holds this label because the whole Maute family is involved in the establishment of an ISIS-linked organization that their followers call the Daulah Islamiyah Fi Ranao (DIFR) or the Islamic State of Lanao. The Maute family proclaimed the DIFR in September 2014 after performing a bay’ah or a pledge allegiance to ISIS leader, Abu Bakar Baghdadi.

To advance ISIS activities in the provinces of Lanao, the Maute Group formed two highly trained armed groups called Khilafah sa Jabal Uhod(Soldiers of the Caliphate in Mouth Uhod) and Khilafah sa Ranao (Soldiers of the Caliphate in Lanao) headed by the Middle-East educated Maute brothers: Omarkayam Maute and Abdullah Maute.  The family organized a clandestine fortress on behalf of ISIS in its hometown in Butig, Lanao del Sur, and other satellite camps in the neighboring towns of Lumbatan, Lambuyanague, Marogong, Masiu,and even Marawi City. In November 2016, the Philippine military conducted military operations in Butig to retake the town from the Maute Group’s operational control.

But from Butig, the Maute Group just discreetly formed several hideouts in Marawi City with the intention of controlling the whole city to serve as the headquarters of the Maute-supported the Daulah Islamiya Wilayatul Mashriq (DIWM), the so-called Islamic State Province in East Asia. 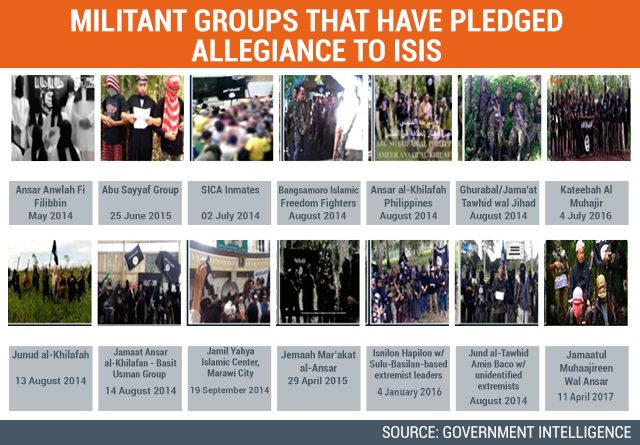 The DIWM is the umbrella organization of all armed groups in the Philippines that have pledged allegiance to ISIS.

Among the notorious armed groups in the DIWM are factions of the Abu Sayyaf Group (ASG) and the Bangsamoro Islamic Freedom Fighters (BIFF) as well as remnants of the Anshar Khalifa Philippines (AKP) and the Khilafa Islamiyah Mindanao (KIM). ASG commander Isnilon Hapilon serves as the overall leader or Amir of DIWM, whose members are called by ISIS as the Soldiers of the Caliphate in East Asia.

Contrary to various reports, government forces are fighting in Marawi City not only the Maute Group but also other armed groups under the DIWM. There is no doubt, however, that key officials of DIWM are members of the Maute family.

The Maute family enjoys many starring roles in the DIWM because of its current military strength, financial profile and political status. The formation of the Maute Group is, in fact, indicative of the rise of family terrorism in the Philippines.

Family terrorism is a new global phenomenon involving family members in various acts of terrorism.  The killing, for example, of 49 people at a gay club in Orlando, Florida in May 2016 was a product of family terrorism. Omar Mateen, the gunman, was the son of parents who fought for the Al-Qaeda linked Taliban in Afghanistan.

ISIS is, in fact, encouraging terrorism in families experiencing frustrations, marginalization, and relative deprivation. ISIS prefers members of the family to get involved because family terrorism eases the recruitment process and it effectively reduces the risk of betrayals. Bringing members from the same family increases strong loyalty to terrorist organizations and solidifies organizational relationships.

The Maute Group is called as such because the entire family has been accused of various involvements in crimes associated with terrorism: illegal possession of firearms, illegal manufacturing of explosives, kidnapping, extortion, money laundering, illegal drug trades, and others.

Because terrorism runs in the family, the Maute Group was able to establish a strong discipline among members who are considered part of the “family” of jihadists. Because the Maute Group is an integral part of a larger group, the DIWM, it has developed a potent force to multiply violence.

The Maute Group’s military performance in the current battle in Marawi City is a strong indication of its strength and virulence. Foreign fighters from Southeast Asia, the Middle East, Central Asia and even Xinjiang in China are attracted to join the DIWM because of the excellent reputation of the Maute Group.  Even ASG leader Hapilon went down to Marawi City from Basilan for forge unity with the Maute Group in its attempt to strengthen the DIWM.

Like ISIS, the Maute Group has a violent extremist worldview, which currently flows in the blood of family members. It takes more than military actions to counter this worldview, which justifies recruitment to their jihadist cause.

The Philippine government needs to immediately develop innovative non-military countermeasures that can offer alternative narratives to the twisted yet alluring worldview of violent extremism.

Otherwise, unintended consequences of ongoing military actions by the government can unnecessarily provide a fertile ground for the further propagation of violent extremism not only in Mindanao but also in the entire Philippines and its neighbors in East Asia. – Rappler.com