Facebook Twitter Copy URL
Copied
In the rebuilding of majestic Marawi City, inordinate attention and resources are needed to bring children back to their schools, and back into their schooling routine

The government is now moving toward rebuilding this historic city. It must rebuild homes, buildings, markets, and roads. It must also rebuild schools.

The prospect and process of rebuilding and education system can be daunting. Let us take a look at what it was before the fighting began.

Outperforming others in the region

There are 36,168 students across 73 public schools in Marawi City.

These include 61 elementary schools, 8 high schools, and 3 senior high schools. Across the country until 2015, all students are required to take the National Achievement Test at Grade 3, Grade 6, and 4th year high school. The test is meant to measure student mastery levels of different subjects like reading, math, science, and Filipino.

Marawi schools outperform most others in ARMM, and in certain subjects like math, outperform even the majority of schools in the country.

Across the 3 years of test scores between 2012-2014, elementary schools in Marawi have generally been improving. 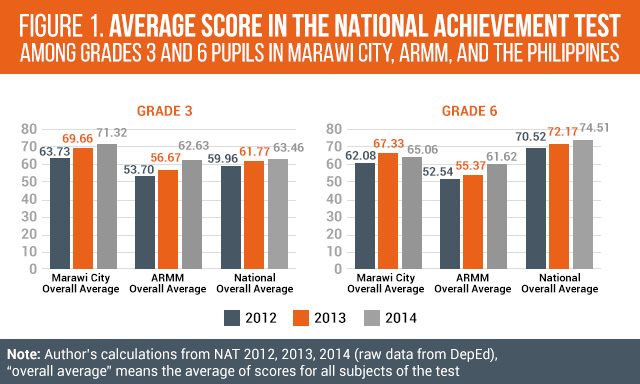 In high school the average test scores of Marawi students are lower than the national average and comparable to the ARMM average. However, Marawi schools score much higher on the math test than most other schools in the country. This is a consistent high performance over multiple years.

The overall average NAT score for high school is pulled down by lower scores in other subjects, including unsurprisingly, Filipino.

Most students in the largest high school in the city aspire to become engineers, says Principal Noraya Alug of the Marawi City National High School. There is strong interest in math because of students’ intention to apply to engineering courses in college.

According to Principal Alug, the attraction to engineering began when overseas workers leaving Marawi for Saudi Arabia were mostly engineers, inspiring children across the city to aim for an engineering degree and eventually a job overseas. Post-conflict: What happened to Marawi students?

Families displaced by conflict moved to neighboring Iligan City and other nearby municipalities, to live with family members, friends, or in evacuation centers. Children continue schooling through different arrangements, but the majority of students enroll in schools where they are temporarily residing.

Principal Alug’s school, Marawi National High School, has thousands of students. Over 600 of them are enrolled in Iligan National High School, where she also now reports for work. About a thousand students are in Cagayan de Oro and a few hundred are in nearby municipal high schools. The teachers were deployed to the high schools that absorbed hundreds more students than they are staffed up for.

In the schools that host evacuated students, overcrowding is avoided by shifting classes. Morning shift classes are 6 am-12 nn and afternoon ones are from 12:30-6pm.

Displaced children are grouped together in classes separate from the regular students, borne perhaps by an expectation that this is a temporary arrangement. It is unclear though how long the students will be staying in host schools, and many parents are concerned that their children should be mainstreamed or incorporated into regular classes rather than segregated. Teachers are less enthusiastic about mainstreaming their kids, concerned about having students feel alienated and being vulnerable to potential bullying and discrimination.

Outside of their home communities and schools, the children’s progress in school can be delayed, and the cost of schooling is more expensive.

In the beginning of the school-year days were spent on much-needed psychosocial counseling. Children are encouraged to talk in class and with fellow displaced classmates about their experiences and fears. They describe the evacuation, how homes have been destroyed or seriously damaged, their concern about where they will be living, and how they can be sure they will not be separated from their families.

These are admirable efforts to mitigate the long-term impacts of prolonged conflict on students, and the benefits will be realized once communities are allowed to return to Marawi, where life can go back to something close to normal. Historically, schools are vulnerable to conflict and crime in all ARMM provinces.

In the years 2010 to 2014, 20% of all schools in the region reported at least one incidence of conflict or crime during the schoolyear. This represents 14 incidences of conflict, plus 15 reported times that a school was used as an evacuation center.

Reported incidences in Marawi before the current conflict is lower than in other provinces of ARMM, but it is still high considering that nationally, the odds of a school being affected by conflict is close to zero.

Any disruption to an otherwise routine calendared academic year of learning can lead to declines in student performance. 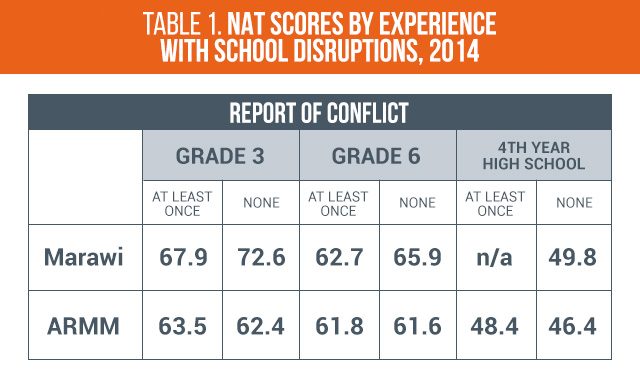 Disruptions to schooling caused by displacement and conflict may result in long-term declines in student learning outcomes if children are not properly guided through the period of disruption and brought back to a secure and stable learning community.

Cushioning against long-term impact of conflict

Putting a city back together is not only a matter of building structures, it is a matter of restoring communities and creating an environment where residents feel secure, safe, and normal. The same applies to schools. Making the school building operational is but the first step, the larger challenge is in bringing children and teachers back to an environment where learning can continue.

In the rebuilding of majestic Marawi City, inordinate attention and resources are needed to bring children back to their schools, and back into their schooling routine.

Mitigating for the impact of disruption and displacement on the lives and learning of Marawi’s children will contribute to the long-term development of the region, and to the elusive peace sought by all its citizens. – Rappler.com

The authors thank Catherine Hoggang for research assistance, the Department of Education for data, and the UP Office of the Vice President for Academic Affairs EIDR System Grant C06-013 for funding support to Clarissa C. David who is a Professor at the College of Mass Communication. Jeriesa Osorio is a research assistant for the EIDR project and a graduate of Communication Research.