Senator Frank Drilon shocked the nation by claiming, during one of the budget hearings last week, that new foreign direct investments (FDI) plunged by 90.3% in the first half of 2017, compared to the same period last year.

This revelation drew a variety of reactions, ranging from curiosity to outrage. One Manila Times columnist, in a viral Facebook post, even implied that people who make such claims “want to destroy this nation.”

But where does Senator Drilon’s figure come from? Is it accurate? Need we worry?

FDI generally refers to cross-border investments where foreigners have some degree of control or influence on the management of a business in another country.

Inflows of FDI are important for economic development because they promote domestic production, technology transfers, and long-run growth.

The Bangko Sentral, following the international definition, breaks FDI down into 3 components:

The second and third categories simply refer to FDI generated by previous FDI. They comprise reinvestments of existing capital and intercompany borrowing and lending used, say, to expand operations.

But the first category – equity capital – is especially interesting because it comprises the influx of new FDI. It’s the difference between new funds entering the country (“placements”) and funds exiting the country (“withdrawals”).

The same principle applies to an economy: when inflows of FDI exceed outflows, the stock of new capital increases, and this signals that foreign investors are confident about the economy’s future. Otherwise, they are skeptical of its prospects.

New FDI shrank simply because more investments fled the country than entered: Figure 1 also shows that, in the same period, placements (inflows) contracted by 61.4% while withdrawals (outflows) grew by 94.7%. Figure 1. Source: BSP. Note: The graph compares January to July data over the years. Senator Drilon’s 90.3% figure doesn’t yet include the July 2017 data. 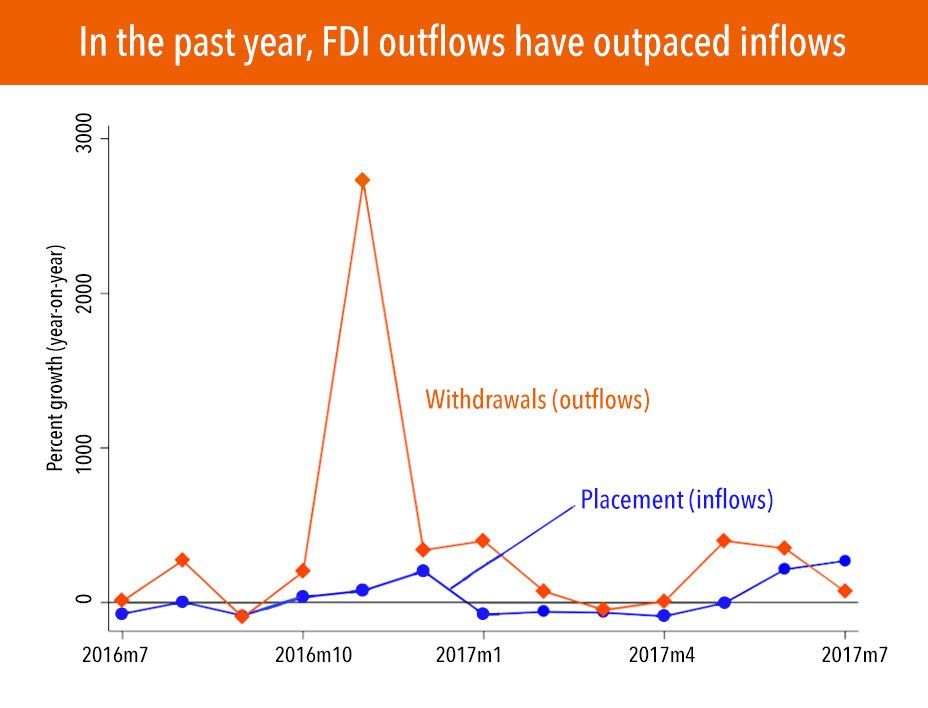 Of course, equity capital is but one part of total FDI. (Senator Drilon’s fixation over new equity was called by Secretary Ernie Pernia as a “narrow” appraisal of the FDI data.)

But even when you add the other two components – reinvestments and debt transactions – total FDI still shrank by 16.5% year-on-year.

We’ve focused on actual FDI, but the data on FDI pledges or commitments tell the same story. For the first half of 2017, there’s been a 38.4% drop in total approved FDI by the Investment Promotion Agency. The biggest drops were registered by SBMA (91.1% drop) and the Board of Investments (81.7% drop).

The sizeable declines of both actual and pledged FDI seem to signal investors’ increasing apprehensions about the economy. This observation is corroborated by many other indicators.

In August, for instance, business confidence dropped to a 3-year low, partly due to rising inflation, the protracted Marawi conflict, and the Mindanao-wide state of martial law.

This month, the World Bank cut its 2017 growth forecast for the Philippines for the second time in a row: from 6.9% in April, 6.8% in July, to 6.6% in October. This is on account of the slower-than-expected implementation of the government’s “Build, Build, Build” program. Finance Secretary Sonny Dominguez merely shrugged off these estimates and said they’re “wrong.”

The country’s competitiveness ranking may have improved by one notch this year, but this reflects not so much our progress (we actually scored lower), but instead, other countries’ fast improvements. Vietnam and Brunei overtook us this year, bringing us down the ASEAN ranking by two notches.

In light of these concerns, investors are reportedly fleeing (or considering to flee) to more attractive neighbors. Members of the South Korean Chamber of Commerce, for example, are moving to Vietnam because doing business there is around two-thirds less costly than in the Philippines.

But this Korean investment flight reveals larger problems. Remember Korean businessman Jee Ick Joo? He was kidnapped for ransom and murdered within the premises of the national police headquarters at the height of the President’s drug war last year. Now who can blame the Korean investors for seeking safer investment destinations?

In spite of all the negative headlines, Duterte’s economic managers are hard at work to attract investors into the country. The finance secretary likes to boast that the President’s trips abroad – costing P501 million so far – have generated $37 billion worth of “investment pledges.” But giving equal weight to pledges and actual investments is inaccurate at best, misleading at worst.

It’s bad enough that investors are witnessing the government’s systemic failure to uphold the rule of law and protect human rights.

But if the government can’t even ensure the physical safety of foreign investors and their businesses, more of them will be spooked and no number of trips and roadshows abroad will boost much-needed FDI inflows.

Perceptions matter a lot in investment. And the latest FDI figures – alongside signs of weaker business confidence, lower growth forecasts, and declining competitiveness – seem to presage a brewing storm in the Philippine business climate.

More importantly, all these could indicate that President Duterte’s style of leadership – characterized by rashness, volatility, violence, and impunity – is turning off new investors and damaging the investment scene.

The last thing we need now is a sustained exit of FDI. Not only could this raise interest rates and accelerate the peso’s weakening in the short run, but more importantly, it could also harm our growth prospects in the long run.

In this choppy sea of Dutertian change, perhaps our best anchor is the economy’s “robust” macroeconomic fundamentals. But if the status quo persists, even this anchor might not prove as sturdy as we think. – Rappler.com