[OPINION] Duterte’s ‘twin deficits’: What you need to know

It may have escaped your notice, but for the first time in 15 years the Philippine economy’s “twin deficits” are back.

A “budget deficit” occurs when the government’s spending has exceeded its revenues. Meanwhile, a “current account deficit” roughly means that a country’s imports have exceeded its exports.

After many years, we are again experiencing them both simultaneously. What do these deficits mean? Are they important? Should you care?

Spending beyond our means

First, a budget deficit occurs when the government spends beyond its means. Although budget deficits are fairly common, we’re now reaching record highs in the Duterte administration.

Figure 1 below shows the long-run trend of the budget deficit. Since President Duterte came into power, the budget deficit (particularly its 12-month moving average) has reached its highest point since the early 2000s. 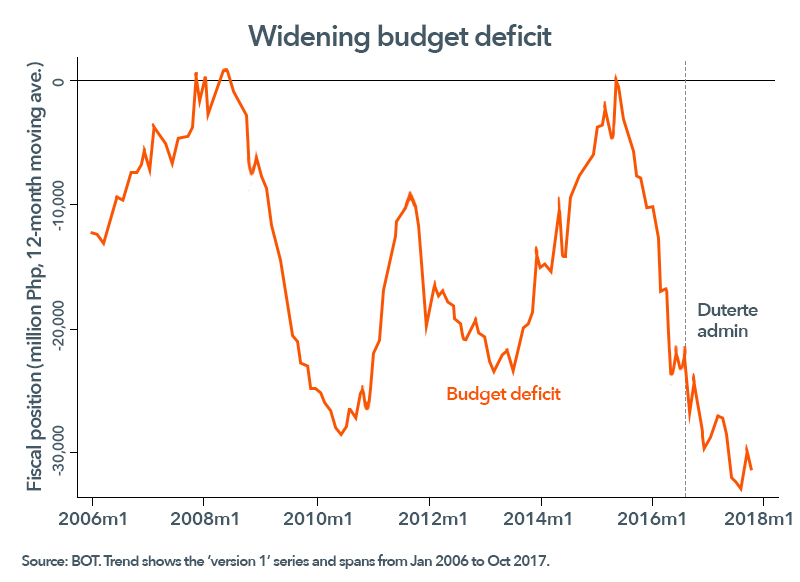 Incurring budget deficits is not bad per se. Just like any household or firm, the government also needs to spend beyond its means from time to time.

For example, when the government has important items to spend on – such as key infrastructure projects and social services – then budget deficits are okay. In fact, they may even be taken as a sign that the government is seriously investing in the country’s future growth.

The Duterte administration is aiming for a budget deficit ceiling of 3% of GDP. The problem is, we are already skirting dangerously close to this limit, and there are many reasons to believe that the budget deficit will keep growing in the coming years.

On the one hand, public spending is expected to balloon because of the many ambitious projects of the Duterte administration. These include Dutertenomics or “Build, Build, Build” (costing P8.4 trillion); free college tuition (P100 billion per year); Marawi rehabilitation (P90 billion); and PUV modernization (P417 billion).

At the same time, the government’s future revenues are not expected to be commensurately large. The first phase of the tax reform bill (TRAIN) is expected to yield just P160 billion based on the version passed by the Senate. When it undergoes the bicameral conference committee, its projected revenue will likely go down further.

Ambitious projects are fine. But having too little revenues chase too many large public spending items could spell even wider budget deficits for the rest of President Duterte’s term.

Another concern with expansionary fiscal policy is that it could “overheat” the economy. With an economy already growing fast at around 6-7%, a spending boom could result in higher demand and a faster rise of prices (that is, higher inflation).

The IMF recently warned us about this. But the Bangko Sentral downplayed such worries and stands ready to “cool down” the economy by raising interest rates if needed.

How can the Duterte government finance its ever-widening budget deficits?

First, it can borrow domestically through the issuance of government securities like bonds and Treasury bills. Domestic borrowings jumped by 47.3% in the first 10 months of 2017 from last year.

Second, the government can borrow directly from abroad. Foreign borrowings – in the form of global bonds and loans from multilateral agencies – jumped by 13.5% in the first 10 months of 2017 from last year.

More foreign borrowings are in the pipeline. To finance the “revolutionary” revival of infrastructure, the Duterte government plans to issue $1-billion worth of global bonds in 2018. At the same time, the government is eyeing large, cheap loans from Japan and China, although it will take some time to settle these loans’ terms.

This uptick in foreign borrowing is corroborated by the return of current account deficits.

This is exactly what we see in the data. Figure 2 shows that, for the first time since 2002, the country is again incurring a current account deficit. 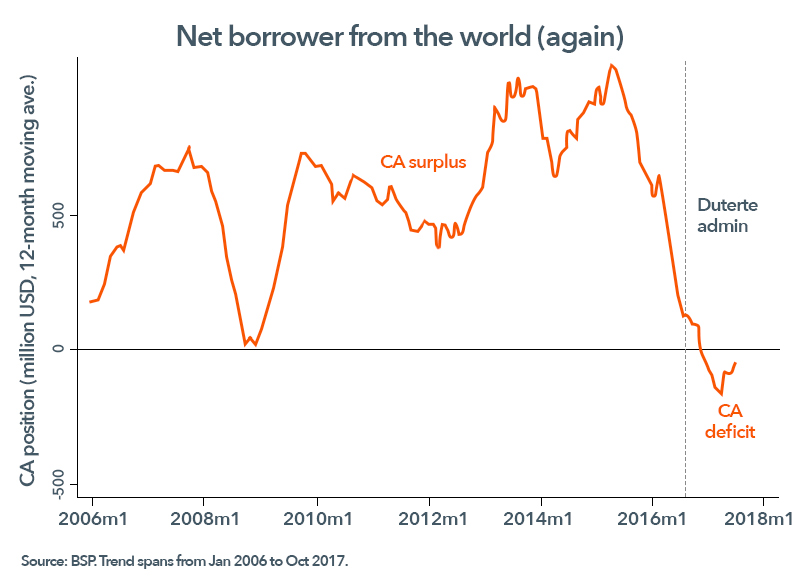 A current account deficit signifies that we are, once again, a “net borrower” from the rest of the world (rather than a “net lender”). In essence, we are using foreign funds to make up for the shortage of domestic saving.

Hence, incurring current account deficits – just like any other form of borrowing – is not necessarily bad. The economic managers say that imports are surging because of increased demand for raw materials and capital equipment, which are being used by the private sector and the government to construct new infrastructure or industrial projects. All these are expected to boost future growth.

The funny thing with this claim, however, is that the growth of private investments has, in fact, slowed down since Duterte’s term started: from 21.7% in the Q3 of 2016, to 6.6% in the Q3 of 2017. (Government spending growth, meanwhile, has picked up.)

Rather than worry about the current account deficit per se, we should worry more about the timeliness, profitability, and productivity of the investment projects it funds.

If such projects are delayed, ill-conceived, wasteful, or riddled with graft and corruption (like what happened so many times in the past), our ability to repay these new borrowings will be compromised, and this could lead to debt problems later on.

In the past, the Filipino people paid dearly when the government ignored the warning signs brought by fast-rising twin deficits.

Recall that the Marcos government also embarked on an infrastructure spending spree financed by huge loans from abroad. Like today, this was manifested in ballooning budget and current account deficits.

Today, we are far from experiencing a similarly bad economic crisis. The economy’s fundamentals are robust, and the economic managers are constantly vigilant about potential sources of risk and uncertainty.

But one can’t help notice that the Duterte and Marcos economic strategies – a huge infrastructure spending spree financed by deficits – are eerily similar.

With the comeback of twin deficits today, we will do well to keep an eye on our new borrowings and make sure that we spend their proceeds on fruitful projects. Otherwise, before we know it, we might all be heading back to the economic troubles of the past. – Rappler.com