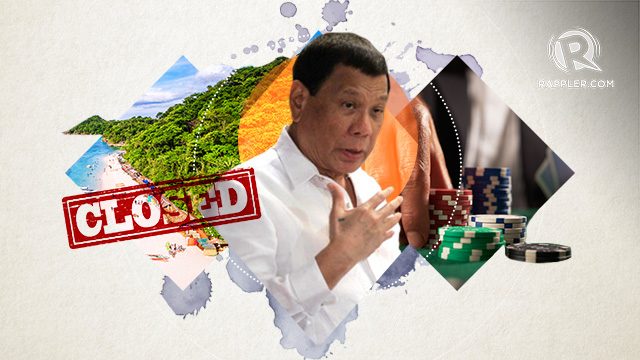 Boracay Island is now ground zero for tensions between the Duterte government and the private sector.

On the one hand, President Duterte wants to shut down the “cesspool” that is Boracay Island for up to a year, ostensibly to allow it to rehabilitate. Spokesman Harry Roque even said Duterte wants to “blow up” using dynamites all structures and businesses that have thrived there illegally and at the expense of the environment.

On the other hand, the private sector dreads the economic blowback of such a closure. Last weekend, Boracay residents and business owners held a symbolic protest at Station 2 – using lights and sand castles – denouncing the President’s threat to their jobs and livelihoods. For them, a year-long shutdown is just too much.

But why is Duterte suddenly hot on the heels of Boracay? Why is he pursuing regulation as unprecedented and extreme as a total ban?

There’s no doubt that Boracay’s environment needs fixing. Yet a number of glaring double standards in Duterte’s Boracay policy betray the fact that his interest in the island may be less about the environment and more about politics and the accommodation of certain private (Chinese) interests.

The Boracay brouhaha started when Duterte declared in a forum that Boracay is a “cesspool” that “smells of sh*t” and therefore needs to be closed.

There’s a grain of truth to this. Some establishments have indeed built illegal structures for many years, and not all are connected to the sewage and drainage system. The unsightly green algae that teem during the summer, although not unnatural, is also fed by phosphates and nitrates that leak from households and establishments.

In other words, Boracay has fallen for a problem called in economics the “tragedy of the commons”: people, following their self-interest, end up overusing and depleting a shared resource like Boracay’s environment.

But a total shutdown – which will inevitably kill business and tourism there – is hardly the best option on the table.

For starters, Boracay’s coastal waters are safer and less polluted than Duterte is wont to claim.

The Department of Environment and Natural Resources (DENR) regularly monitors pollution levels in Boracay. In 2017 they recorded coliforms in the coastal areas to be at just 8 MPN/100 mL (MPN stands for “most probable number”).

This is lower than the danger threshold of 100 MPN/100 mL, and also lower than the 101.2 MPN/100 mL recorded in 2012. In other words, Boracay’s waters are even safer for swimming today than several years back.

Only in certain areas – like Sitio Bulabog – are coliform levels off the charts. In general, however, Boracay is not a “cesspool.”

Even with the presence of coliforms, government has no excuse to cordon off the entire island. With this logic, other tourist hotspots like Panglao and Coron should also be shut down because of high coliform levels found in certain areas there.

Although the DENR is indeed mulling such actions, where do we draw the line? How much tourism and local business is the government willing to sacrifice in the fight against pollution?

At the same time, a shutdown spree would imply that all of Davao City’s beaches should also be closed down immediately, since in 2016 the DENR found some beaches there to have fecal coliform levels 110 to 617 times the acceptable level.

Duterte’s singular focus on Boracay – and the lack of commensurate attention on other, more polluted tourist hotspots – suggests the presence of a double standard.

Second, if Duterte were really concerned about congestion and excessive commercial activity in Boracay, why did he just allow the construction of a new megacasino and megahotel there?

Hotel of Asia, Inc – a subsidiary of DoubleDragon Properties – will also start construction there of a 1,001-room beachfront hotel, set to be the largest in the country.

Note that the construction of both these investments will proceed despite Boracay’s impending shutdown.

Last Monday, Leisure and Resorts World Corp – the local partner of Galaxy – said they already bought a 23-hectare property south of the island for their megacasino. They also secured a provisional license from the Philippine Amusement and Gaming Corporation (Pagcor) that will allow them to begin construction.

Asked if Galaxy need worry about Boracay’s impending closure, the Pagcor chair simply said, “No, they have to build. Opening is at least after 3 years.”

Meanwhile, one official of DoubleDragon said, “I think the cleanup is gonna be a win-win for all the developers in the island…It’s very good for us because when it reopens we’re gonna come back with a stronger and world-class island.”

Investments, whether local or foreign, are not bad at all. But allowing the construction of major projects in Boracay – while closing down local business and tourism for a year – also reeks of a double standard.

Moreover, won’t a megacasino and megahotel just attract more tourists and, hence, just worsen congestion in the island? In 2017 tourist arrivals in Boracay hit a record high of two million, a 16% growth from 2016. Among foreign visitors, the most numerous – for the first time – were the Chinese.

Finally, it turns out that Galaxy’s Boracay megacasino is linked to China’s global infrastructure push called the “Belt and Road Initiative.”

Said Galaxy’s deputy chairman, “As you know, China’s relationship with the Philippines has been improving…Galaxy would like to play a role in the One Belt One Road initiative and we strongly believe the Philippines has great potential and offers attractive opportunities.”

This is a very telling statement. In a previous article, I explained that the Belt and Road Initiative is China’s way of pushing its political and economic power worldwide through the construction of infrastructure projects in developing countries (and the issuance of loans therefor). (READ: What scares me the most about China’s new, ‘friendly’ loans)

As Belt and Road projects spread worldwide, China’s private sector is positioning accordingly, and this includes the gaming industry: last year, another Macau-based casino hub revealed that it is building a $275-million casino complex in Cape Verde, off Africa’s west coast.

Casinos are prohibited in many Asian countries, and the Philippines may yet be one of the best growth areas for Macau-based casinos, not just for our robust economic growth but also Duterte’s wholehearted pivot to China.

In January, Duterte even went on to order Pagcor to stop the entry or creation of new casinos in the country to avoid “crowding” or “oversupply” in the industry. When asked if the incoming Boracay megacasino is covered by this ban, Pagcor said, “[Galaxy] met all the requirements before the President announced the moratorium.” What luck!

This is not the first time Duterte has pushed for the entry of a Chinese firm in the country: last year he pitched the idea of bringing in a Chinese telco to break the duopoly between PLDT-Smart and Globe, ostensibly to promote competition in that sector.

But as shown by his Pagcor directive, Duterte is also capable and willing to kill competition on a whim. How will we attract investments in other sectors if Duterte’s competition policy is stamped by double standards?

More than meets the eye

Environmental problems have hounded Boracay Island for many, many years, with little action from the local government. Hence many can’t help but see President Duterte’s recent interest in the island as a show of his strength and political will.

Finally, the growing influence of China on Duterte’s policymaking is also striking. Just how beholden is Duterte to the Chinese? How many more of his future decisions and policies will be tinged by Chinese interests? What’s in it for him? – Rappler.com

The author is a PhD candidate and teaching fellow at the UP School of Economics. His views are independent of the views of his affiliations. Thanks to Kevin Mandrilla for useful comments and suggestions. Follow JC on Twitter: @jcpunongbayan.