The death of a subversive 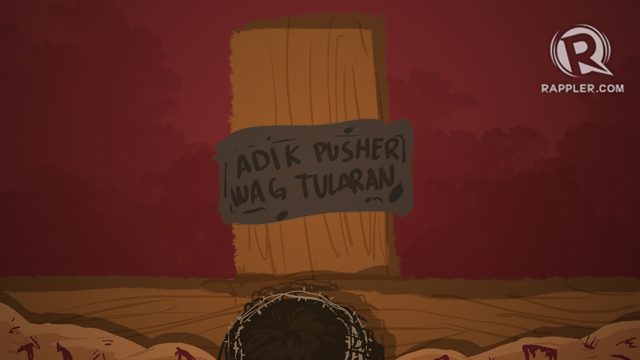 Facebook Twitter Copy URL
Copied
Our religious observance becomes totally contradictory to what they were supposed to be. I have thought of these questions for a long time now: How can millions of Catholics piously kneel and venerate the cross on Good Friday and at the same time approve that addicts must die because they are a threat to the whole country? Holy Week is a time for quiet reflection, following the station of the cross, travelling to churches for visita iglesia, singing the Pasyon in pabasa, joining Church services – all in the name of the suffering and death of Jesus. The thinking goes: if Jesus suffered and died for us, we should also share even for just a bit in his suffering; and subjecting ourselves to long boring sermons or walking a kilometer or two in a procession could be one of them. So each one is enjoined to fast a little, abstain from some meat, do some personal sacrifices, offer our little pains, and not engage in gossips or boisterous laughter, as my grandmother always warned us as kids – because Jesus is dead.

I am afraid we have domesticated Jesus’ death, romanticized it a little bit, made it palatable to our cozy tastes, packaged safe for our consumption but totally distant from the real events they are supposed to commemorate. We are in danger of forgetting that his was a violent death, the death of a dangerous subversive. And there was nothing ‘pious’ about it!

A theologian once wrote:

“Jesus did not enjoy a peaceful old age. He died violently in the summer of his life. He was not defeated by illness. He wasn’t an accident victim. He was executed outside Jerusalem, beside an old rock quarry, by soldiers under the orders of Pilate, the highest authority of the Roman Empire in Judea. It was probably the 7th of April, in 30 A.D. The prefect had sentenced him to death as the instigator of an insurrection against the Empire. Thus his passionate life as a prophet of God’s reign ended on a cross-shaped gallows.” (Pagola, 2011)

To the ruling elite of Jerusalem, Jesus was a subversive prophet. His proclamation that a new kingdom is imminent – the reign of God – proves to be quite disturbing. In Jesus’ time, basileia was a word used only to describe the Roman Empire. There was no other basileia. But Jesus appropriated it and used it to proclaim God’s reign among the poor.

In this new kingdom, the victims, the outcast, the sick and the poor find themselves in the center. His words but also his work (healing the sick, accepting sinners and eating with them, etc.) were an indirect but scathing critique to the religious and political establishment that marginalized and killed them.

He came to Jerusalem riding on a lowly donkey spontaneously cheered on by many. The ruling elite saw this as an indirect parody of powerful kings who used to enter Jerusalem on mighty horses with an orchestrated hakot crowd who were forced to be there.

But what he did in the temple during this last week nailed his fate, a direct affront to the powers that be. He overturned the tables of moneychangers and offerings for sale. It upset the Jews: how dare he insult the place of worship? And it upset the Roman authorities as well: he disturbed the stability of the temple that was the symbol of Pax Romana, the bastion of Roman power in this part of the world.

For all these and more, he was condemned as a criminal and, in a sham trial with stage-managed witnesses, was judged to be cruficied.

I find it necessary to remind us of this context lest we forget that the events we celebrate on Holy Week were harshly prophetic and political.

At best, we see that the most of what we do on Holy Week appear to be sanitized commemorations totally disconnected from history. We can ask, for instance, how does going to seven churches in visita iglesia, praying ten Hail Mary’s in each, with matching ‘selfies’ in front of each church or statue and which looks like more of a family outing ending at Starbucks, relate with Jesus’ difficult journey to Calvary? How does a Chrism Mass with parishioners bearing tarpaulins of large photos of their priests, waiting for them to come out of the cathedral, and screaming like a rock star fans club relate with Jesus feeling so deserted by his disciples and so lonely in the garden of Gethsemane? How does the lavishly decorated altar of repose for the Blessed Sacrament on Holy Thursday relate with the simple supper that Jesus celebrated with his friends with all the painful emotions of knowing that someone they love so dearly is about to die the next day?

At worst, our pious and apolitical religious observance becomes totally contradictory to what they were supposed to be. I have thought of these questions for a long time now: How can millions of Catholics piously kneel and venerate the cross on Good Friday and at the same time approve that addicts must die because they are a threat to the whole country? How dare we call ourselves Christians while 80% of us – mostly Catholics, some of them priests, sisters and lay leaders who are present in Holy Week services or leading them – approve of Duterte’s brazen use of power and his policy to send them helplessly to the slaughter? I have not yet asked about the silencing of the critics of this administration, the setting free of plunderers and drug lords, our modern-day Barabas, the violence and trash-talking against women, the instrumentalization of the lumads, and many others.

It is the most inconsistent of positions: to piously profess to follow Jesus to Calvary and to tell Pilate “crucify him”. We might as well change the marker on the cross – from “INRI” to “APHT”, from “Iesus Nazarenus Rex Iudeourum” to “Addict, Pusher Huwag Tularan!”

Fr. Danny Pilario CM is a professor and the present Dean of the St. Vincent School of Theology of Adamson University in Tandang Sora Avenue, Quezon City. He is also a guest minister at the Parokya ng Ina ng Lupang Pangako in Payatas, Quezon City. Fr. Pilario is a founding member and former president of the Catholic Theological Society of the Philippines, also known as DAKATEO or Damdaming Katoliko sa Teolohiya. You can email him at danielfranklinpilario@yahoo.com. On Facebook he is at facebook.com/danny.pilario.