Dissecting TRAIN’s impact on our incomes

Apr 6, 2018 3:31 PM PHT
JC Punongbayan
Facebook Twitter Copy URL
Copied
In the mad rush to get the tax reform law going, government may have inadvertently trampled on and railroaded the poor 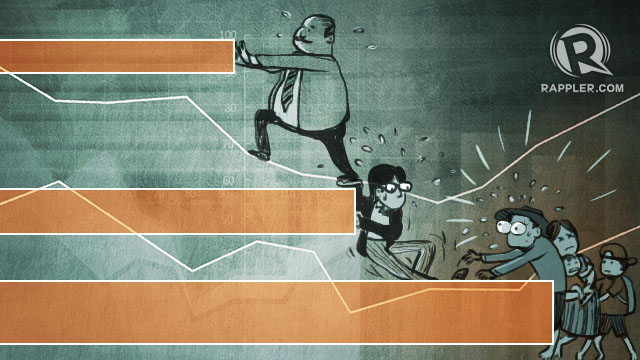 Duterte’s tax reform law called TRAIN has so many moving parts – and affects so many aspects of our economic lives – that it’s hard to grasp how it will ultimately affect us and our incomes, both in the short run and the long run.

In this article we use data to dissect TRAIN, explore its likely impacts, and determine who among Filipinos will pay for them the most.

We will give special focus to the plight of the poor, and explain why the aid they will receive to cope with TRAIN is likely to be inadequate and delayed.

Contrary to common perception, a lot of detailed economic analyses actually went into TRAIN from start to finish. Most of it was conducted by a vibrant team of young economists at the Department of Finance (DOF).

For me, the most interesting piece of their analysis is a table estimating the 2018 impact of TRAIN on different income groups. (The latest version of this table – based on the final version of the law – can be found on slide 67 of this presentation from the DOF website.)

The economic models that churned out these estimates, no matter how complex, are imperfect and dependent on a number of assumptions, not all of which may be entirely realistic. Still, these numbers give us a reasonable first approximation of TRAIN’s impacts. 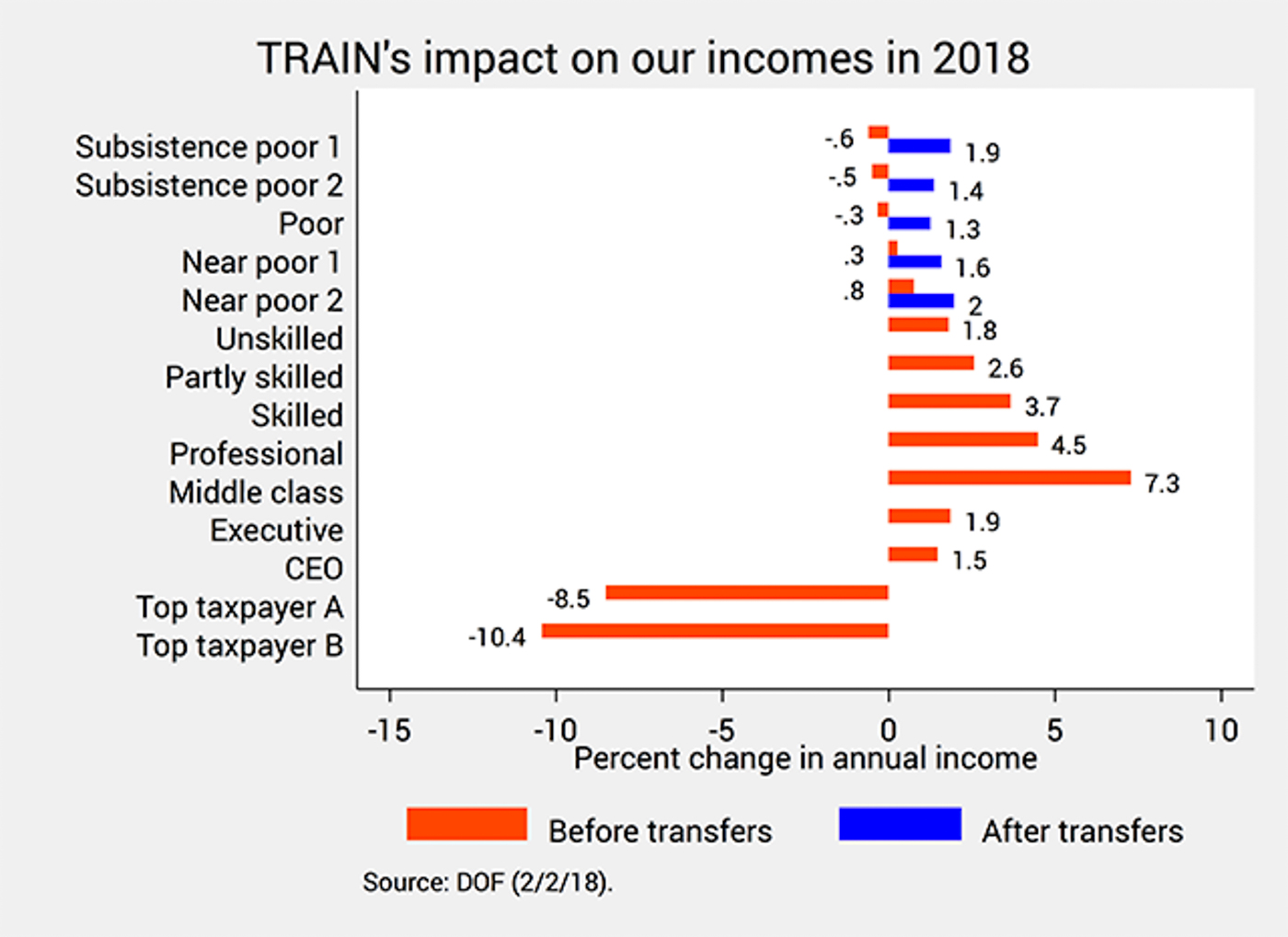 Because TRAIN aims to make the tax system fairer (more “progressive”), lower incomes for the super rich is okay.

But lower incomes for millions of poor Filipinos is unconscionable. TRAIN’s proponents knew about this all along, and made sure to earmark part of TRAIN’s revenues for cash transfers that could help tide them over. Without such aid, the poor will certainly hurt from TRAIN (more on this later).

How come TRAIN will increase most Filipinos’ incomes, but not the incomes of the poor and the super rich? We can further parse TRAIN’s impacts in 3 ways.

First, TRAIN cuts personal income taxes for a large swath of the population. Figure 2 shows that, the richer you are, the higher your extra take-home pay after income taxes.

The middle class stands to benefit from this the most (an extra 8.6% of their annual income) while the poorest will benefit the least (a paltry 0.1% bonus). In contrast, the super rich suffer a sizable reduction in their take-home pay, to the tune of 7.3% to 9.2%. 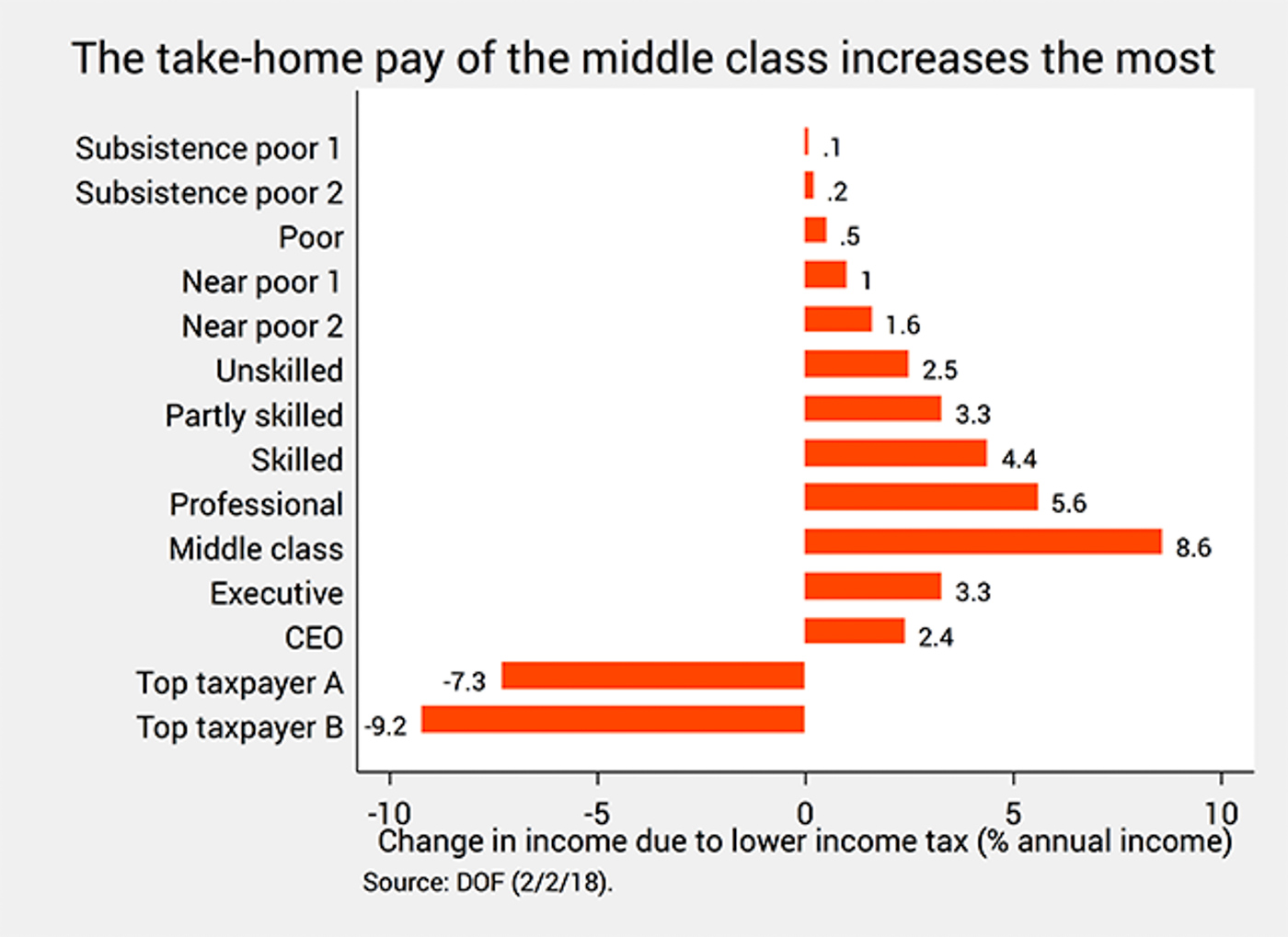 Estimates suggest that these would reduce everyone’s incomes (Figure 3). But the reductions are especially large for the well-off (executives, professionals, middle class, and the super rich), albeit not exceeding 1% of their annual incomes.

This is partly explained by the fact that the richest tenth of the population tend to consume more than half of all petroleum products. 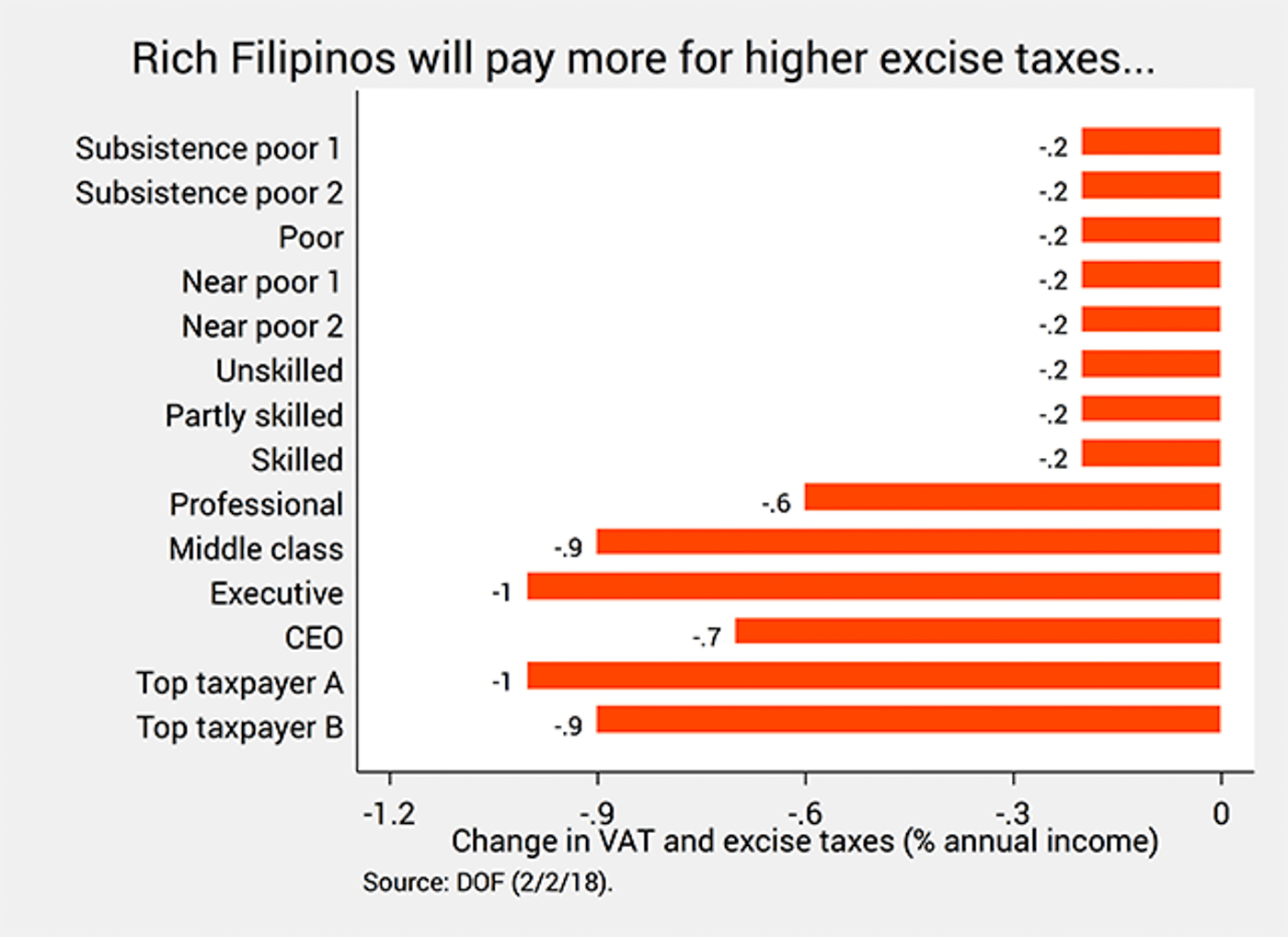 Third, TRAIN’s excise taxes also hasten the rise of prices (that is, increase inflation). Figure 4 shows that this will also reduce everyone’s incomes, but the negative impact on the incomes of the poor is about thrice the impact on the super rich. 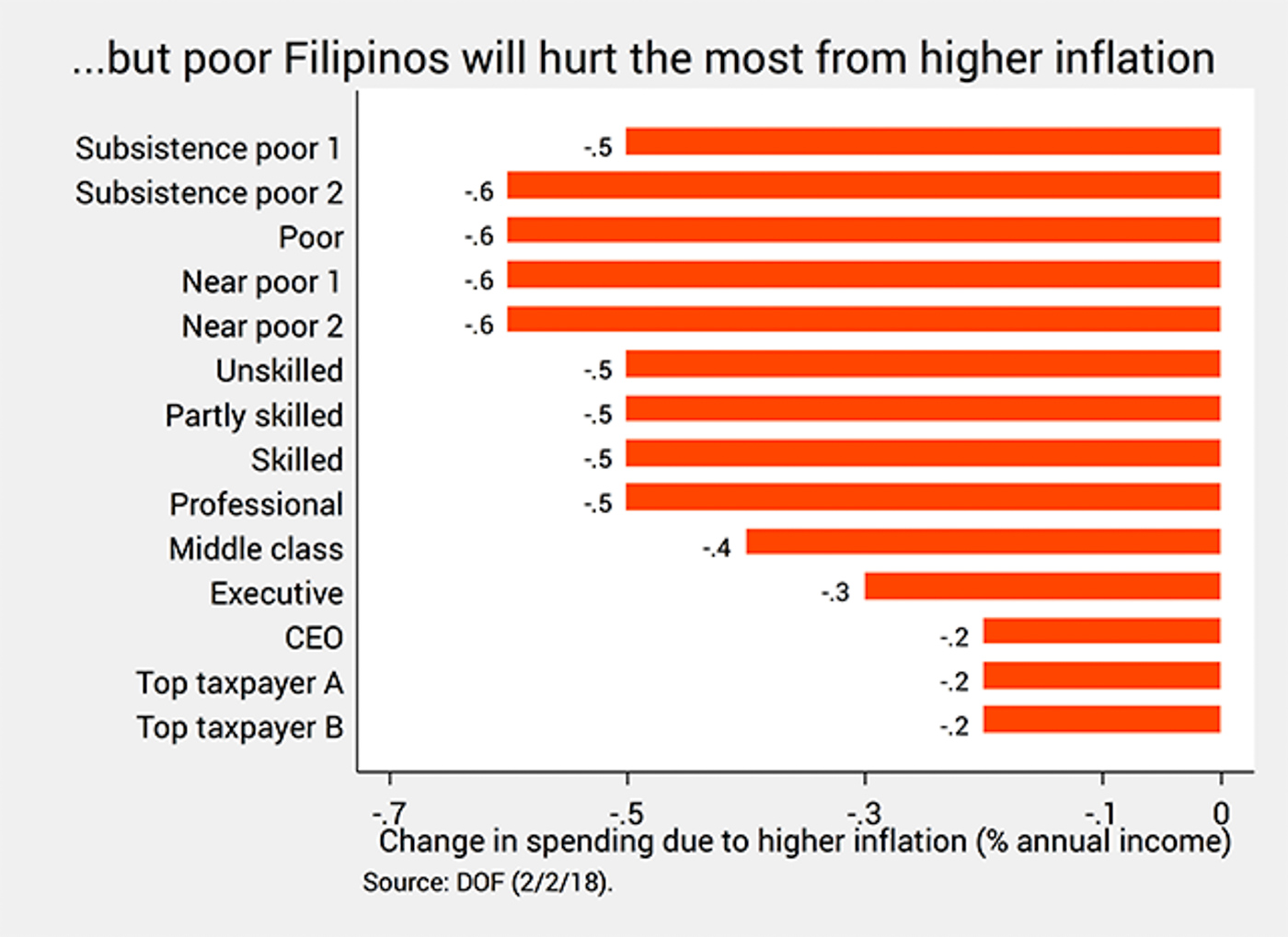 All in all, when you combine TRAIN’s impacts on personal income taxes, excise taxes, VAT, and inflation, the poor come out as worse-off (at least in the short run).

Government knew this at the outset. That is why TRAIN allocates at most 30% of its revenues to palliative measures that can help tide over specific sectors that TRAIN will hurt. These include:

Government expects that these transfers will more than offset the impact of higher inflation on the poor (see the blue bars in Figure 1).

Yet there’s now reason to believe that such aid – especially the unconditional cash transfers – will be insufficient and delayed.

This means, for example, that all poor families will get the same amount regardless of the number of their children.

Official estimates of TRAIN’s impacts were calculated assuming a family of 5 (that is, 3 children). But Dean Dennis Mapa of the UP School of Statistics correctly pointed out that the very poor tend to have more children than that. Will P2,400 per year be enough to tide over poor families of all sizes, preferences, and locations?

In addition, Figure 5 shows that the inflation rate for March was recorded at 4.8% (using the 2006 base year), and is now beyond the Bangko Sentral’s 2018 inflation target of 4%. 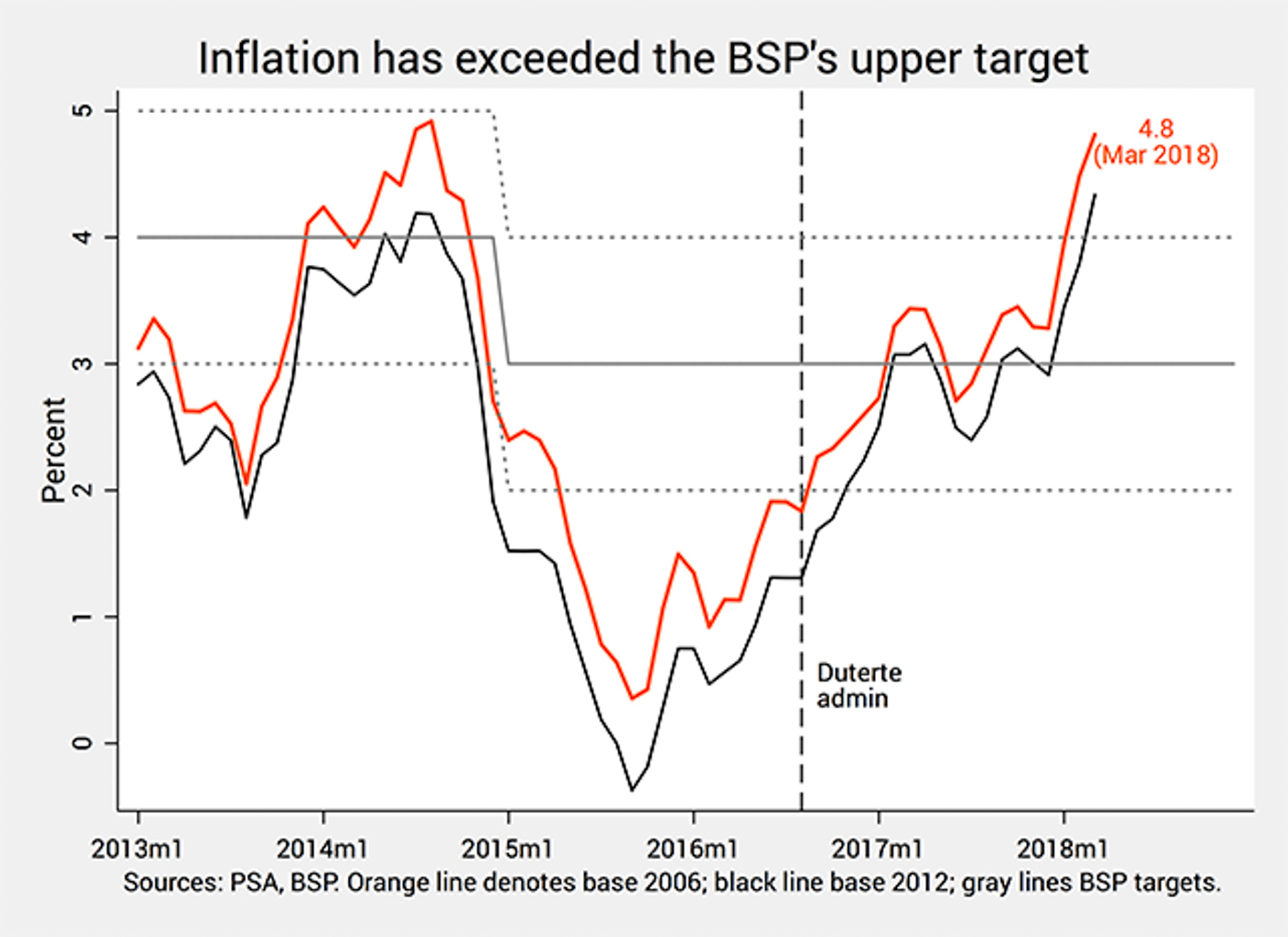 Although government expected this, Dean Mapa also pointed out that the poorest 30% of households might experience higher inflation rates than the rest of the country owing to the larger share of their budgets going to food (now affected by TRAIN’s new excise taxes).

Despite all these sources of higher inflation, the lump sum going to the poor is stubbornly pegged at just P200 per poor family per month. Why did it have to be so fixed in the law?

The Department of Social Work and Development (DSWD) has a database of the poor called Listahanan, from which the beneficiaries of the government’s conditional cash transfer program, 4Ps (Pantawid Pamilya), are selected.

Can the DSWD do all these before the October 2018 election ban? Reports indicate that, due to logistical troubles, a whopping 26% of beneficiaries (or 2.6 million households) will not receive aid for TRAIN until June or August 2018.

This presents a problem. Higher inflation is happening right now, and those 2.6 million poor households are no less deserving of help than those already included in existing social welfare programs. Yet their aid is several months delayed. In the meantime, how will they cope from TRAIN?

With world oil prices at a 3-year high and the peso at an 11-year low, higher inflation due to tax reform is a surefire way to hurt the incomes of the poor and erode their purchasing power. One wonders: is this really the best time for TRAIN?

One can only hope that the world price of oil stabilizes, the peso avoids a freefall, and the DSWD irons out the logistics of its transfers soon enough. The removal of quotas on rice importation could also help abate inflation. The Bangko Sentral is also hinting it might finally step in.

Doubtless TRAIN is a necessary first step to correct the many problems ailing our tax system. And I appreciate the fact that the government foresaw that it would hurt the poor in the short run.

But in the mad rush to get TRAIN going, government may have inadvertently trampled on and railroaded the poor.

With all the other government policies already besetting the poor (notably Duterte’s senseless war on drugs), you can’t really blame the poor for seeing TRAIN as just another burden in their lives. – Rappler.com