Facebook Twitter Copy URL
Copied
If President Rodrigo Duterte is a sovereign trickster, there have been others who came before him. Humor...can, in fact, be used to reinforce power relations, or to establish patterns favorable to a person seeking power. 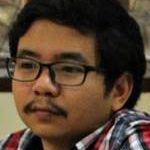 Much as I wanted to, due to a number of reasons, I was unable to attend a lecture by eminent historian Vicente Rafael titled “The Sovereign Trickster” at the Ateneo de Manila University last Thursday, August 23.

The titular trickster is our President; based on the lecture’s abstract, Dr Rafael tasked himself to critically examine “Duterte’s claim to dominate death while monopolizing laughter” through the work of French thinker Michel Foucault. I am certain that it was enlightening, knowing that Dr Rafael’s oeuvre includes vital contributions to scholarship on the relationship of language and power.

This is not me returning the favor for a rather generous Facebook endorsement by Dr Rafael of a recently-published article of mine on ghostwritten “scholarship” attributed to Ferdinand E. Marcos (a work that deals with a long-running joke, in a sense). This is in a way similar to a student turning in a book review after glancing at the book’s Wikipedia summary (not that I ever did anything like that, my dear former English teachers). However, my motivation for writing this is more satiation of curiosity than obtaining course credit.

I will thus talk about what I think should be touched upon in lectures focusing on Duterte and humor (without having attended any).

I have previously heard Duterte being linked to Juan Pusong, the Cebuano trickster previously written about by other scholars, notably writer/teacher/former underground revolutionary Mila Aguilar. Drawing from her previous work, in lectures she gave in early 2017 on Duterte’s rise, she readily tied Duterte to Pusong, who tricked a king into killing himself, thereby usurping the throne. A gullible sovereign effectively surrenders power to a mischievous character who makes incredible but tantalizing claims to win hearts and minds – surely, no parallels in the current administration’s origin story there.

Pusong has also been interpreted by Cebuano scholar Hope Sabanpan Yu through the work of Mikhail Bakhtin, with whom we associate the term carnivalesque – writing that deals with humor and the inversion of power relations. Through such a lens, Pusong becomes a lowly character from the margins who uses his wits to challenge entrenched authority – raise your Duterte fist if you’ve heard a Duterte Diehard Supporter describe the President that way before.

Duterte also makes a lot of jokes about death, dying, rape, and killing, or gallows humor. If Duterte were a standup comedian, that would be his shtick. No, it is his shtick; when my colleagues and I watched hours of Duterte’s speeches for…academic purposes, we came to realize that Duterte is a practiced comedian, with a stock of go-to jokes for any occasion (this is, of course, not news by now, nor was it ever to his Davao City fanbase before the 2016 elections). He knows that his brand of humor works with certain audiences; like many comedians in their nth decade in showbusiness, he sticks to recycling what works (I’m no comedian [my wife agrees] but even I like reusing jokes that have gotten laughs before [my wife despairs]). Isn’t that mindset, applied to his governance style, precisely why many voted for him?

Lastly, Duterte’s jokes can be linked to fascist (or, charitably speaking, very conservative) humor, given how many – including the man himself – have described him using the F word. We usually hear of fascists being made the butt of jokes, or of jokes being made by people to cope under a repressive regime (at least one book has been written with a critical stance on such humor in Nazi Germany). We are used to humor being, in line with Bakhtin’s views, subversive; satire is a weapon employed many times by writers in the Philippines – Jose Rizal included – to ridicule, and thereby combat, oppressive authorities.

I’ve talked to foreign scholars who do not specialize in the Philippines who know at least one anti-Marcos joke. But the caricature of a humorless dictator (which is not at all baseless) is oftentimes precisely that – a caricature. Even card-carrying Nazis liked jokes, even telling (superficial) jokes about their leaders. Joseph Goebbels – Adolf Hitler’s chief propagandist – reportedly once held a joke contest in early 1939 (a few months before the Germans invaded Poland, starting World War II). Supposedly, according to sources like this one, this is one of the winning jokes in English translation:

“I will not perform in this costume,” [a girl says]. Man asks, “Why not? Does one see too much?” Girl replies, “Rubbish, you old fool! Too little!”

We hear similar bawdy jokes from a current world leader, who, like Hitler, is not very fond of certain peoples in his country. He’s in seemingly excellent terms with another world leader, whose domain is halfway across the globe, who is also fond of jokes objectifying women. Could that be a hallmark of fascist humor – a reduction of certain classes of people into objects, thereby allowing their treatment in jokes as inferior to privileged groups? But isn’t “othering” always an element of jokes about groups of people? Are you automatically a fascist if you make jokes based on stereotypes, or enjoy such jokes?

(In Playboy’s 1987 interview with Ferdinand and Imelda Marcos, the former was asked what he wanted his tombstone to say. Ferdinand Marcos referenced a lawyer joke: “Here lies a lawyer who lies still.” I’m also fond of lawyer jokes – through them we learn that some stereotypes have a basis in fact. It’s nice to know that I have at least one thing in common with my favorite dictator, who, last I checked, is lying still [pun very much intended]l in the Libingan ng mga Bayani.)

I cannot, at this time, give answers to all of the above. My work-related engagements with humor have been limited to studies about satirical news in Southeast Asia (Filipinos have The Headline Reader, Singaporeans have New Nation, Malaysians have The Tapir Times; we all have leaders we like to make fun of) and, as I’ve shown here, making bad jokes. At best, I can attempt to synthesize my previous musings.

If Duterte is a sovereign trickster, there have been others who came before him (or co-exist with him). Humor is not the monopoly of subversives – it can, in fact, be used to reinforce power relations, or to establish patterns favorable to a person seeking power. Humor relieves anxiety; anxieties can be sexist or racist. What is funny varies from person to person (even married ones). But a group of people with the same prejudices can collectively find certain exclusionary jokes funny, further strengthening their common biases.

Finally, we should always remember that jokes are typically fictional (or fictionalized comic versions of true events), and all fiction is counterfactual – they show alternatives to reality. When it is oftentimes difficult to tell if someone is joking or not, there’s a fair chance that that difficulty is rooted in that person’s fondness for telling fictions, even when that person is expected to be truthful. Arguably, such people can be highly entertaining comedians (even when they become very repetitive, at least to their most ardent fans). But, seriously, should they be presidents? – Rappler.com

Miguel Paolo Reyes is a university research associate at the Third World Studies Center, College of Social Sciences and Philosophy, University of the Philippines Diliman. Neither his colleagues nor his wife were directly involved in writing this essay.