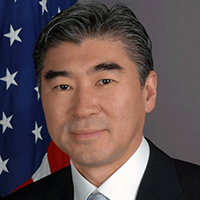 Every November, the US Departments of State and Education celebrate International Education Week to highlight the benefits of educational exchange. I am proud to report that based on the most recent data, more Filipino and American students are preparing for the future in each other’s countries. I believe strongly in the value of educational exchange to promote mutual understanding, spark innovative partnerships, and prepare students and researchers for success in an increasingly knowledge-based, global economy.

The United States and the Philippines share a rich history of educational exchange. More than a century ago, 526 American teachers boarded the USS Thomas for a month-long voyage to Manila to establish a new public school system in the Philippines. Known as the Thomasites, their legacy survives here today. They built the foundation of the Philippines’ public education system, and many of them married and settled in the Philippines, bridging our two countries and cultures.

In 1948, recognizing the promise of educational exchange in the aftermath of World War II, US Ambassador to the Philippines Emmet O’Neal and Philippine Vice President Elpidio Quirino signed an agreement to promote mutual understanding between our countries through educational exchange. This agreement established the Fulbright program with the Philippines, which has the proud distinction of being the oldest continually-running Fulbright Program in the world.

Since launching this partnership 70 years ago, more than 9,000 of the best and brightest Filipinos and Americans have participated in US government-funded exchange programs in each other’s countries, including several of the Philippines’ National artists and scientists, as well as many prominent politicians, academics, and businessmen. Today, the US government sends more than 300 Filipinos to the United States every year through thirty-plus student and professional exchange programs.

As US ambassador to the Philippines, my team and I have been working with students, teachers, and the Commission on Higher Education Development to provide more Filipinos with opportunities to study in the United States. I am delighted to report these efforts are paying off. For the second year in a row, the number of Filipino students studying at US institutions has grown, according to data from the annual Open Doors Report released this week. The 7.3% increase in Filipino students to the United States is significantly higher than the global average. The number of US students in the Philippines also increased. This is fantastic news and augurs well for the future of our friendship, partnership, and alliance.

While proud that more of our students are studying in each other’s countries, I am confident we can – and must – expand educational exchange even further to prepare our youth.  With more than 4,500 accredited institutions, thousands of academic programs, most of the world’s top-ranked universities and colleges, and unmatched value and flexibility, the United States offers higher-education opportunities unavailable anywhere else in the world. The Philippines has more than 50 million English speakers under the age of 24, a rapidly growing economy, and mobile population, including a large U.S. diaspora, making the United States a natural fit for Filipinos seeking to enhance their skills and opportunities. (READ: U.S. and Philippines: Friends, partners, and allies)

For Filipinos interested in higher education opportunities in the United States, the Embassy’s EducationUSA office is the one-stop source for information.  EducationUSA services are free of charge, and advisors have one mission: find the best academic fit for each student’s needs and aspirations. Given the diversity and quality of institutions, I am confident the United States has the right program for everyone. Students, parents, and teachers can find information on EducationUSA services and programs on Facebook: www.facebook.com/educationusa.philippines.

During my time in the Philippines, I have come to realize education is one of the most valuable assets for Filipinos, who seek brighter futures for themselves and their families. In the United States, we seek the same. Together, through educational exchange and the stronger connections that result, we can create the economic opportunities that will propel both countries into the future. – Rappler.com