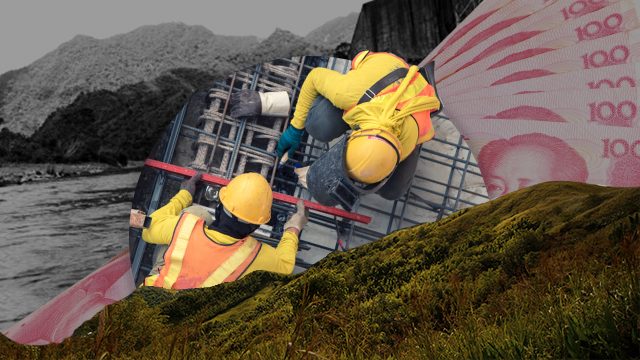 Facebook Twitter Copy URL
Copied
The Chico River loan agreement may prove to be a template for future loan agreements that the Philippines enters into, effectively compromising our patrimonial assets In this two-part article, we argue that the controversy over the Chinese loans that will finance the Kaliwa Dam and Chico River Projects should not be seen only through the prism of whether the Chinese loans are onerous or not. They should also look at the nature of these projects, which we consider as development aggression at its worst.

Because these two projects are bad from an environmental and social justice point of view, likely resulting in an intensified insurgency in the Sierra Madre and Cordillera, they are likely not to be built and the probability is that future administrations will have to cancel these loans. These, in turn, will result in defaulting on the loans and in arbitration proceedings that have been designed to favor China.

In March, just as the country was readying itself to face the onslaught of the dry season, millions of Metro Manila residents woke up to a citywide water interruption that, as of this writing, has not yet been completely restored. This almost overnight shortage forced many citizens to line up at fire hydrants, missing jobs and classes, just so they can ensure that they have water – however little – at home.

They blamed the lack of water supply on Manila Water, saying that the company was greedy and incompetent for not having been able to foresee this crisis. Manila Water, in response, claimed that the situation was a result of a shortage on the current primary water sources of Manila, the Angat-Ipo-La Mesa dams.

Due to these series of events, talks have resurfaced about the creation of better infrastructure to ensure that water supply will never be a problem, especially in Metro Manila, including a series of dams which will be erected in the Sierra Madre mountains, the Kaliwa Dam project.

Offered as a solution to the water crisis and usual water shortages in the summer months, the project has been discussed since the Marcos era, but has never become reality because of strong opposition from civil service groups and indigenous communities, claiming it will prove to be more destructive than beneficial in the long run.

Thus, the Kaliwa Dam project has been at a standstill for decades. That is, until now.

Among the many issues surrounding the construction of the Kaliwa Dam is its similarity to the Chico River project – both are Chinese-funded and their contracts have almost similarly worded texts.

Should disputes over management, payment, and subsequent issues arise in Chico River and the Kaliwa Dam, Beijing and Hong Kong will have jurisdiction, and their arbitration rules will be followed. These provisions triggered a backlash because of the belief that they were tantamount to the Philippines waiving its sovereign immunity.

The Kaliwa Dam will be largely funded by the Export-Import Bank of China through a loan of $211,214,646.54, which will cover 85% of the expenses. The rest will be paid for by the Philippine government. The loan will have an interest rate of 2%, including a commitment fee of 0.3% and a management fee of 0.3%. The contract has a maturity period of 20 years, including a grace period of 7 years.

At the forefront of the discussion of the loan’s merits and demerits are the Department of Finance (DOF) on one end, and Senior Associate Justice (SAJ) Antonio T. Carpio on the other end.

According to the DOF, which held a press briefing in Malacañang on March 26, such provisions in the contract are standard, and are just means by which China can ensure compliance with the payment scheme.

Undersecretary Mark Joven, who was present at the briefing with Undersecretary Bayani Agabin and Assistant Secretary Tony Lambino, presented examples of loan agreements that the Philippines has entered into with other countries in the recent past, and clarified the issues surrounding the Philippines’ waiver of its sovereign immunity.

As a response to questions on lender choice, he said that the Japanese bid was actually higher, but that the inconsistency in currency use and conversion made all the difference.

To assuage doubts about the issue of an international tribunal issuing arbitral awards, Undersecretary Joven lifted passages from the Chico River loan agreement, also found in the Kaliwa Dam loan agreement, which indicate that if the arbitral award was arrived at through collusion or fraud, or was based on a clear mistake of fact or law, or contrary to the public policy of the Republic of the Philippines, then it is not enforceable.

Further, he said that all the decisions of any international arbitration tribunal will still have to be brought to Philippine courts for enforcement anyway, a clear indication that the Philippine government still has sovereign powers over the natural resources within its borders.

In interviews since the issue erupted, SAJ Carpio has warned the government that ownership by the Philippines of the gas-rich Reed Bank may be threatened because of the Chico River loan agreement provisions, saying that should the Philippines default on its loan, its recourse would be to pay China with the gas and oil found in Reed Bank.

He considered this possibility because of the Oil and Exploration Development Act of 1972, as amended, where the Department of Energy granted a service contract to a private entity to exploit the resources of Reed Bank. The law essentially proclaimed oil and gas found in the Reed Bank as patrimonial assets, which are properties owned by the Philippines that are not for public use, public service, or the development of national wealth.

Assistant Secretary Lambino stressed that SAJ Carpio never actually mentioned in his many interviews about the loan agreement that Reed Bank is patrimonial property, but that the latter was instead referring to the oil and gas that can be found in the Bank. In addition, Usec Joven said that since the Reed Bank concession has already been granted, it would technically not be possible for the Chinese to enforce the hypothetical award by getting the Reed Bank concession.

It is this issue of collaterals and patrimonial property that has sparked much debate.

On March 28, during the 17th Integrated Bar of the Philippines National Convention in Iloilo, SAJ Carpio reiterated his earlier stance and warning about the possibility of default.

He also said that while there are variations in the creation of the contract’s text, the fear is present for both the Chico River and Kaliwa Dam loans, and that the Chico River loan agreement may prove to be a template for future loan agreements that the Philippines enters into, effectively compromising our patrimonial assets.

Other individuals and groups have raised similar concerns regarding the Duterte government’s assent to the loan and the provisions comprising it, including ex-congressman and senatorial candidate Neri Colmenares who tagged the Kaliwa Dam project onerous. Others have criticized the contract not for the debate on patrimonial property, but its high interest rates. Secretary of Justice Menardo Guevarra’s belief, however, is that people should not be worried, as the Philippines will always have the means to pay its loans.

We do not make judgments on the personal motivations of people in government who are defending these projects. Knowing them personally as patriots and competent professionals, we believe in the sincerity of Undersecretaries Joven and Agabin, and Assistant Secretary Lambino. However, they are wrong in their views on this specific debate, and Justice Carpio, an expert on these issues both as a present jurist and as a corporate lawyer and tax professor in his former life, is correct.

In the second part, we will also show that environmental and social justice concerns will make the Chico and Kaliwa dam projects a sure triple loss – for the environment, the people, and the Philippine economy. – Rapper.com

Joy Reyes is a collaborator of Professor La Viña. She recently graduated from the University of the Philippines College of Law and holds undergraduate degrees in Psychology and Political Science from the Ateneo de Manila University.