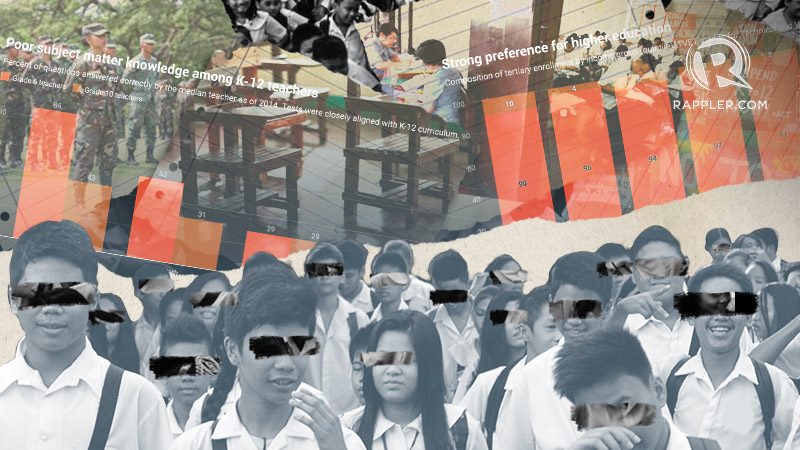 Facebook Twitter Copy URL
Copied
Despite severe birth pains, the SHS program is here to stay. But we need to know as soon as possible which parts of it are working and which aren’t.

By virtue of the K-12 law, the Department of Education (DepEd) added two more years – Grades 11 and 12 – to the traditional 4 years of high school.

One motivation is to align ourselves with the basic education systems found in most other countries, which last for at least 12 years.

More crucially, SHS aims to better prepare students for whatever career path they may choose after high school, academic or otherwise.

Well-intentioned as it is, the SHS program has faced a number of critical problems since it was launched in 2016. In this article, we discuss them and why they need urgent fixing.

First, many schools nationwide were grossly ill-prepared for SHS and found themselves scrambling for resources.

A study by the Philippine Institute for Development Studies (PIDS) showed that not nearly enough schools were ready to provide the various tracks and strands.

In School Year 2017-2018 (the SHS program’s second year of implementation) only a paltry 7% of schools could provide 5 or more strands. As much as 38% could provide just one.

In other words, only a few could provide a reasonably diverse set of tracks and strands. For schools that could somehow offer SHS, many had to make do with inadequate classrooms, laboratories, or workshops.

To augment this and other shortages, the Commission on Higher Education (CHED) even encouraged state universities and colleges to join in and provide SHS where they can, albeit only until 2021.

Teachers, too, were ill-prepared for SHS.

Many were at a loss on which specific subjects to teach in the tracks offered by their schools. Textbooks and teaching and learning guides came out too late. Training standards were also highly uneven.

As a result, many teachers had to learn their subjects on the go. A teacher, say, could be assigned to teach Physics even if he or she only underwent a two-week crash course (having not been a Physics major). Learning modules also vary a lot from school to school.

A disturbing finding is that as of 2014, except for elementary English teachers, “the average elementary or high school teacher could answer fewer than half of the questions on the subject content tests correctly.”

This is not to say, of course, that teachers are much to blame.

All of them, for sure, are just doing their best given meager resources. Higher educational institutions offering teacher education also do not produce enough licensure exam passers to meet the daunting demands of K-12.

Unfortunately, subpar teaching – if unaddressed soon by the DepEd leadership – could compromise the effectiveness of SHS in years to come.

SHS also doesn’t seem to be equipping graduates with sufficient skills and knowledge to be college-ready or work-ready.

For one thing, many employers still avoid hiring SHS graduates.

Some college teachers, too, complain that they have to reteach in “bridging classes” basic ideas that students were supposed to have mastered in SHS.

Perhaps one reason is that the SHS curriculum, experts say, is far from decongested. Another is that SHS students are “locked” in their tracks: they could not try their hand at various tracks to see which one fits them best. They are even penalized for shifting to other tracks.

Sadly, students’ mastery of concepts remains poor in the years leading up to SHS.

A study from 2015 to 2016 found that – at least for the Chemistry topic “matter” – 39% of incoming Grade 7 students in regular high schools were deemed “ready.” But this readiness declined with each successive grade level, dropping to a mere 11% among incoming Grade 10 students (Figure 2).

Even among students in science high schools – which provide more advanced curricula – readiness tended to drop from 90% in Grade 7 to just 50% in Grade 10.

Absent firm grounding in junior high school (JHS), it will be unsurprising to see several students ill-equipped by the time they reach SHS and beyond.

Perhaps most troubling, the DepEd is not sufficiently monitoring the implementation of SHS and evaluating its outcomes.

For instance, the DepEd has yet to conduct a nationwide “tracking study” which will monitor the transition of students from JHS to SHS, then from SHS and beyond.

Such a study is critical. It will tell us how students choose different tracks and strands, and whether they pursue them through college. It will also help steer DepEd’s career guidance efforts, which experts say is distressingly lacking.

What we know so far is that there remains a very strong preference for college education among Filipino students and their parents (Figure 3). Many believe a college education improves one’s chances of landing a good job and enjoying higher compensation.

This college preference is likely to be reinforced by the new free tuition law: College tuition is free anyway, so why not pursue it?

Sure, DepEd is reportedly cooking up a tracer study soon.

But proper monitoring and evaluation should have been implemented right at the get-go, not when we’re already nearing the SHS program’s third year of implementation.

Learn from the mistakes

Despite severe birth pains, the SHS program is here to stay. But we need to know as soon as possible which parts of it are working and which aren’t.

There are enough problems with SHS to go around without the pointless proposal to require ROTC (Reserve Officers’ Training Corp) among SHS students.

For the sake of future batches – and to avoid wasting the time and resources of both students and their parents – the DepEd better get its act together.

The least it can do is to learn from past mistakes. – Rappler.com

The author is a PhD candidate at the UP School of Economics. His views are independent of the views of his affiliations. Many thanks to Marianne Joy Vital, Stephanie Mutuc, Nicki Tenazas, Jackson Bacabac, and other resource persons for useful comments and suggestions. Follow JC on Twitter (@jcpunongbayan) and Usapang Econ (usapangecon.com).