[ANALYSIS] US-China trade war: Where does the Philippines stand? 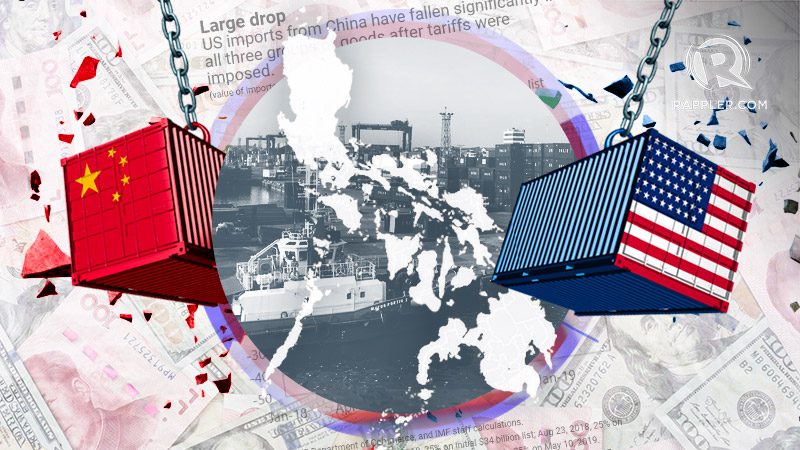 Facebook Twitter Copy URL
Copied
If we can quickly lower the costs of doing business, beef up our competitiveness, and promote enough export-oriented manufacturers, the US-China trade war could turn into a blessing in disguise

The US and China are currently locked in a burgeoning trade war. This means they’re slapping higher and higher taxes – more precisely “tariffs” – on the goods they import from one another.

If they were ordinary economies, such a trade war would not be much cause for concern.

But the US and China are the world’s two biggest economies. As they disrupt the lake that is the global economy, the ripple effects will invariably reach Philippine shores.

How exactly will the Philippines feel this trade war? Will we helplessly suffer as we watch from the sidelines? Is there a silver lining in all this?

To understand the trade war, let’s talk about “Trumponomics.”

If you ask US President Donald Trump, the ballooning US trade deficit with China – or the excess of Chinese imports over Chinese exports – is at the heart of many supposed ills of the US economy.

To him, it proves that China has been “stealing” American jobs, especially those in manufacturing.

Trump espoused this view even before becoming president. Back in 2016 he tweeted:

Today, just as Trump is erecting a wall at the US-Mexico border to ward off Mexican immigrants, so is he erecting trade barriers between the US and China to ward off imported Chinese goods.

But this tendency toward protectionism is dangerously misguided for 4 reasons.

First, the US trade deficit with China is not very informative about the US economy’s true health, and should therefore not be the pivot on which US trade policy hinges.

Second, it’s plain wrong to say the Chinese are “stealing” American jobs. Economists instead attribute the steady decline of US manufacturing to other factors like automation.

Third, Trump’s trade war goes against the sweeping decline of global trade barriers we’ve seen since World War II. Average tariff rates have gone down as many – but certainly not all – countries came to realize trade barriers tend to do them more harm than good.

Fourth, Trump likes to trumpet that China will end up paying for the new tariffs anyway. But Econ 101 tells us this is misleading: American consumers are likely to foot the bill partly, if not wholly.

Despite a profound ignorance of the economic implications, Trump has ordered the most sweeping protectionist policies the US has seen in many decades.

He imposed higher tariffs on Chinese imports in 3 batches last year. His most recent move was a 25% tariff on $200-billion worth of imports from China, effective May 10, 2019.

The effects have been immediate. In a recent report, the IMF or International Monetary Fund said US imports from China have shrunk considerably (Figure 1). When China retaliated with its own tariffs, US exports of goods to China also floundered. The reason stems from basic supply and demand. As something becomes more expensive, you buy less of it. Likewise, when imported goods become pricier because of tariffs, people order fewer of them.

As for American producers, it’s a mixed bag.

Some firms were definitely hurt, especially those which use imported Chinese goods as inputs to their own production. But other firms benefited from this: stifled competition created legroom for them to jack up their prices, thus adding to consumers’ burdens.

Chinese consumers and producers, too, have reeled from the trade war, especially firms which export a lot to the US.

But make no mistake: The trade war’s effects are by no means confined to the US or China.

The IMF expects global economic growth to fall by 0.3% in the short run due to lower business confidence, disrupted global value chains, and a slower spread of new technologies.

In retaliation, China is now floating the idea of restricting exports of rare-earth minerals, key components in computer chips.

Trump also recently tweeted – yes, tweeted – he would impose a 5% tariff on all goods from Mexico effective June 10:

On June 10th, the United States will impose a 5% Tariff on all goods coming into our Country from Mexico, until such time as illegal migrants coming through Mexico, and into our Country, STOP. The Tariff will gradually increase until the Illegal Immigration problem is remedied,..

Is it just me, or is the trade war fast spinning out of control?

What about the Philippines?

President Duterte said in a recent speech his government is “deeply concerned” about the US-China trade war, which is “creating uncertainty and tension.”

By contrast, Bangko Sentral Governor Ben Diokno said the trade war is “totally out of the picture” where Philippine growth is concerned.

There may be a silver lining in all this uncertainty. A recent study by the ADB or Asian Development Bank shows that ASEAN countries – including ours – may, in fact, see boosted incomes and exports as a result of the trade war (Figure 2).

The reason is that the US – instead of importing from China – will choose to import from firms located in other countries unaffected by the new tariffs. Firms in ASEAN countries might receive orders from the US, thus allowing them to expand their domestic operations.

This so-called “trade redirection” will be apparent in many sectors, especially electronics and optical equipment, textiles and garments, and chemicals.

Whether the Philippines can cash in on this depends on our ability to promote domestic manufacturing investments and attract foreign investors seeking refuge from the trade war.

Sadly, our competitiveness in the region leaves much to be desired, what with lingering uncertainties about the Trabaho bill (which wants to make it harder for investors to enjoy various incentives) and the endo bill (which, although well-meaning, some economists fear, might turn off prospective investors).

More than a year since it passed, the Ease of Doing Business law has also yet to have implementing rules and regulations.

Foreign direct investments are now pouring into Vietnam, and global assembly lines are increasingly choosing to locate there.

Unsurprisingly, experts say Vietnam stands to gain the most from the US-China trade war.

There are enough threats to Philippine economic growth without the escalating US-China trade tensions.

Exports could be our saving grace. If somehow we can quickly lower the costs of doing business, beef up our competitiveness, and promote enough export-oriented manufacturers, the US-China trade war could – however counterintuitively – turn into a blessing in disguise.

But at the rate the administration is addressing these and other issues, the deck appears to be stacked against us.

Is this going to be yet another opportunity that will slip through our fingers? – Rappler.com