Jun 19, 2019 11:10 AM PHT
Facebook Twitter Copy URL
Copied
Duterte the patron knows what a patron expects – debt of gratitude, acquiescence despite being wronged, and the unconditional acceptance that the patron will make up for mistakes, one way or the other 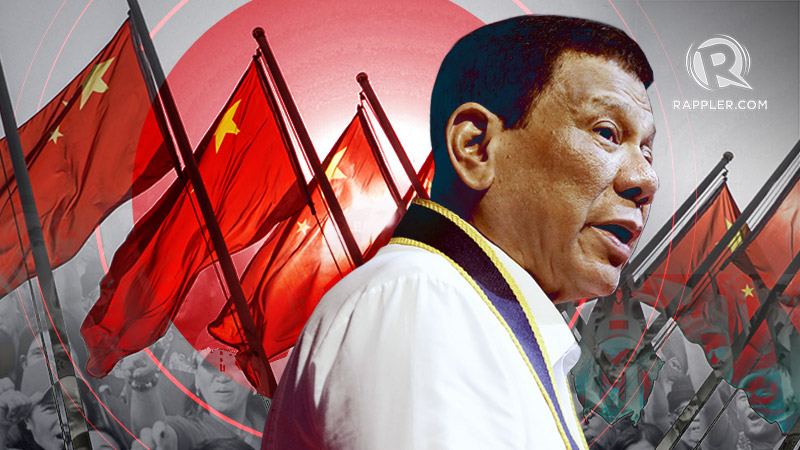 He had been to practically every dead soldier’s wake, but he chose to snub the homecoming of the men who watch our seas and claim what’s ours by their sheer presence in the middle of nowhere.

Worse, he took the occasion of the anniversary of the Philippine Navy to say that no, he wouldn’t say anything against China, because that would be risking war with a nuclear state power, which happens to be his patron (which he didn’t say).

It’s as if the Navy men gathered before him on June 18 didn’t belong to an institution that once upon a time ran aground a World War II-era ship at a reef off Palawan – letting it float there with a fluttering Philippine flag to simply show China who owned those waters surrounding it.

It’s as if the Navy men who waited 4 hours for his speech that day didn’t spend months and years in scrappy ships that patrolled Philippine waters that were constantly invaded by Chinese fishermen and militias in gigantic boats armed with fancy surveillance equipment.

I must admit that as President Rodrigo Duterte entered the halfway mark of his 6-year term, I was prepared to declare him immune from the midterm itch that Philippine presidents suffer – when entrenched problems begin to surface, when the system catches up, and when the big wins of the first 3 years are suddenly dwarfed by the realization that they were achieved at the expense of the seemingly small stuff that will now matter in the last phase. (READ: President Aquino’s reality check)

After all, Duterte is the first president in Philippine post-war history to wipe out the opposition in midterm elections. The victory of his favored candidates was made sweeter by the fact that every major crime had been thrown at this administration: killings, corruption, drugs – not to mention incompetence, which is the biggest public crime of all.

More than this, Duterte has managed to rewire us, too, to the extent that we sometimes wonder whether we truly know this country, or whether we did revolt against a dictator and booted out the corrupt, or whether we cherished decency – in actions and in words.

Let’s face it, we thought we knew Philippine politics – and Filipinos – until Duterte messed with our heads. He curses God, debases women, orders killings, and invents lies against critics. I regret being president so much that I sometimes think of hanging myself to death, Duterte would say. Instead of taking offense, we found charm in this impatience with the burdens of leadership.

Duterte has been talking his head off and taking regular Netflix and Fentanyl breaks in the last 3 years, but who minds? Certainly not the 79% of Filipinos surveyed in March who were satisfied with his performance. And certainly not the 72% who said they were happy with how the administration has been running state affairs.

The Navy event at Sangley Point best illustrates this almost-blind love some have for this president: At the same time that he was siding with the Navy troops’ longtime nemesis at sea, China, he also was giving them the carrot. On that particular day, he handed that carrot to former Marine commandant Emmanuel Salamat, current chief of the military’s Northern Luzon Command, which is responsible for guarding the country’s northernmost territory, including Scarborough Shoal in the West Philippine Sea.

Duterte said out loud that he’d gladly appoint the navy officer Salamat, upon his retirement on July 1, as administrator of the water regulatory agency – never mind that he already previously named retired army general Dick Morales to the post.

A local in Malacañang

At Malacañang, Duterte has mixed all the most potent ingredients of local politics and nationalized them – so that he constantly caters to our basest instincts and exploits what we, growing up in the province, have come to embrace: the patron provides, the feudal lord presides, the tribe thrives.

The last time we had a former mayor for president, we ousted him after barely two years in office in 2001. The Petrus-guzzling Erap Estrada partied up to the wee hours in Malacañang, granted business deals to friends, lavished his women with mansions, and bullied critical media. By the time he was exposed for earning millions from jueteng, Estrada had worn us out.

Duterte is no Estrada, and for one important difference: the President brought his brand of local politics lock, stock, and barrel to Malacañang. He did not have to be chastened as a spare tire, like in Estrada’s case who was vice president from 1992 to 1998. Unlike Estrada, who served as senator for 5 years, Duterte did not have to learn to deal with gridlock or engage in debates.

From where he sat in Davao for decades, Duterte ruled with an iron fist, above processes and rules. And he got away with it because he provided for all – whether to the military generals who ran out of cash for their operations, or to the communist guerrillas who needed medicines for their wounded, or to the poor student who rushed a sick mother to the hospital, or to the father seeking vengeance for a murdered son.

For every rule he broke to keep a city safe, he made up for it as a patron.

But the patron now finds himself with a patron, too.

And this largely explains the seemingly unexplainable Duterte in the last 10 days since a Chinese vessel rammed a fishing boat owned and manned by Filipinos in Philippine territory.

For how else can we fathom this meek side of the man? Why, in the face of China, has he suddenly learned anger management?

Because Duterte the patron knows what a patron expects: debt of gratitude, acquiescence despite being wronged, and the unconditional acceptance that the patron will make up for his mistakes, one way or the other.

But this is where reality check sets in.

The 3-year test of a presidency has its own logic. As I wrote of Aquino’s midterm: “The President will soon see for himself – if he hasn’t yet – how tough the last phase is going to be. It’s the nature of the beast: the entrenched problems begin to surface once again. The system catches up. It will be payback time. What was swept under the rug in the first 3 years that will now begin to haunt us? What processes and sectors were overlooked? What were the wrong choices that were not immediately addressed?”

After the May elections, I was ready to postpone this reality check period for the President. Ironically, his patron has paved the way for it.

Will Duterte end up following the path of Aquino’s unpopular endgame, or will his patron make sure he is given every wherewithal to avoid it? – Rappler.com