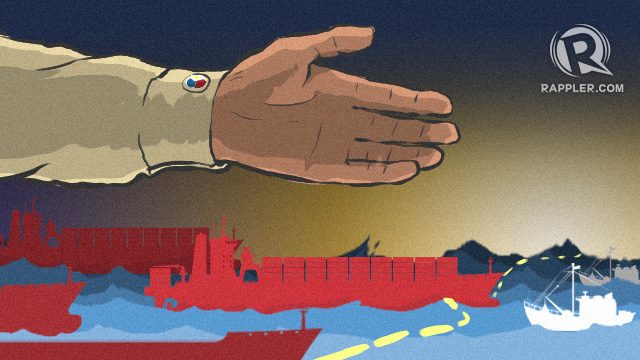 Three years after the stunning victory that washed away China’s expansive 9-dash line claim on the South China Sea, President Rodrigo Duterte still needs to grasp the essence of the case decided by an international arbitral tribunal in 2016: how the Philippines framed it and what the country won.

This was the one striking thing that surfaced after the sinking of a Philippine fishing boat  by a Chinese vessel last month in Recto Bank. Duterte’s subsequent remarks showed a lack of appreciation of the historic maritime case the Philippines filed against China, the impact of the international tribunal’s ruling, and China’s absence in the arbitration anchored on the UN Convention of the Law of the Sea or UNCLOS of which it was a signatory.

In a way, China’s ramming of the fishing boat has brought back national conversation to the arbitral ruling of July 12, 2016, a subject that was shelved by Duterte, not giving it the attention it deserved.
It is but fitting then to return to the basics on the third anniversary of the milestone victory of the Philippines. (READ: The sinking of Gem-Ver: Barko! May babanggang barko!)

What the case wasn’t about

When the Philippines haled China into court in 2013, it wasn’t to determine sovereignty over certain features in the South China Sea. It wasn’t to settle the question of which country owned what.

That’s why Duterte’s statement that the hit-and-run of a fishing boat “was not a matter of sovereignty”  was off the mark. In the first place, sovereignty wasn’t the core issue.

The 2 main goals of the arbitral case were to have China’s 9-dash line claim declared illegal and to define the maritime entitlements of the features claimed by the Philippines, whether these were rocks, low-tide elevations or LTEs, or islands.

Why was the Philippines not able to take the most straightforward legal path of deciding sovereignty?

It was because China had cleverly opted out of compulsory arbitration provided by UNCLOS when it came to the issue of sovereignty, as if anticipating legal challenges to its actions in the South China Sea. Only one window was open to the Philippines: to clarify maritime entitlements. There was no other choice.

In doing so, the Philippines skirted the issue of sovereignty.

A few words about the nature of islands, rocks, and LTE. This was the more technical aspect of the case.

Rocks, as provided by UNCLOS, have limited entitlements of 12 nautical miles. LTEs are not entitled to any maritime zones. Islands, for their part, generate an exclusive economic zone (EEZ).

The Philippines argued that its claims were over rocks and LTEs. This meant that they would have no overlapping entitlements to maritime zones between the Philippines and China.

As we all know, the tribunal invalidated China’s 9-dash line claim and sided with the Philippines in its position that the features on which it laid claim to were rocks and LTEs. These included Recto Bank (Reed Bank), where the fishing boat was rammed.

Duterte’s revelation that he and President Xi Jinping had an  agreement that would allow Filipinos to fish in Panatag Shoal (Scarborough Shoal) and the Chinese to fish in Recto Bank further shows that the President doesn’t understand the arbitral ruling.

In 2016, the tribunal declared Scarborough Shoal a common fishing ground, meaning Vietnamese, Chinese and Filipino fishermen who have been plying their trade here can continue to do so. China doesn’t need to give permission to the Philippine fishermen.

As for Recto Bank, the Philippines has exclusive rights over it as the feature lies within the country’s EEZ. Other countries have to ask the permission of the Philippines to fish as well as explore for oil and gas in Recto Bank.

Even if Duterte hasn’t prioritized the ruling, he should have at least tried to read up on our gains and use these to advance the Philippines’ interests.

Another remark of Duterte that betrays his fragile grasp of the case is his openness to have a joint probe with China on the sinking of the fishing boat. Salvador Panelo, the President’s spokesperson, said that Duterte welcomed the proposal which came from the Chinese foreign ministry and Justice Secretary Meinardo Guevarra.

From the start, China refused to have anything to do with the arbitration case and rejected the tribunal’s decision. Yet Duterte airbrushes this fact and desires to work with the country that has taken over maritime features in the West Philippine Sea.

The President may well be reminded that, during the negotiations for UNCLOS, China lobbied on behalf of developing nations for a 200-mile EEZ. At the time, China was not yet a global power. Today, the country that was once a champion of the EEZ shuns UNCLOS and the arbitral ruling because its interests are affected.

Looking back, the tribunal ruling lifted cobwebs of doubt on the nature of the features in the South China Sea and what belonged to the EEZ of Philippines. Imagine this: the Philippines gained a maritime area that is larger than the total land area of the country, rich in resources, thanks to the arbitral decision.

This is a big deal. Why doesn’t the President get it?

I still maintain my impression that Duterte’s competence is limited.  He, too, needs to study and let the facts sink into his consciousness.

Foreign policy, after all, is not an extension of his personal likes and whims. – Rappler.com