[OPINION] Temporary relief for Persons Deprived of Liberty amid the coronavirus 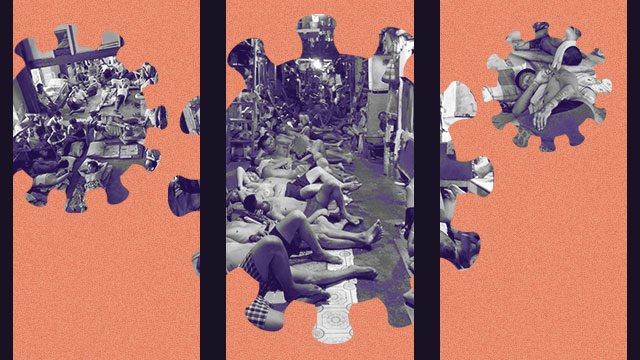 Facebook Twitter Copy URL
Copied
'With an overcrowding rate of 350%, the Philippines has the most congested correctional system in the world. If one of the PDLs gets infected in the congested jails, it could be a catastrophe.' Disclaimer: Our aim is not to spread further discord and distrust in our government and jail personnel in the time of the coronavirus crisis. We believe that they are doing their best efforts given the dire circumstances. However, we felt that no one is paying attention to the plight of the Persons Deprived of Liberty (PDLs) and we are compelled to share our research on the best practices in other jurisdictions to guide our policy makers.Disclaimer:

The Philippine government placed the entire Metro Manila under “enhanced community quarantine.” The Philippine Supreme Court issued a circular suspending all court hearings. The Bureau of Jail Management and Penology (BJMP) has suspended all jail visitations nationwide. These are all pre-emptive steps to slow down the spread of the novel coronavirus that infected hundreds of people in the Philippines and hundreds of thousands worldwide. Indeed, one of the most susceptible areas to the spread of the virus is the jails and prisons. With an overcrowding rate of 350%, the Philippines has the most congested correctional system in the world. If one of the PDLs gets infected in the congested jails, it could be a catastrophe. Our jail staff would be tremendously strained to handle the infection once it starts. Despite their best efforts and even in normal circumstances, they lack medical facilities and doctors to handle routine health problems. We have recently witnessed jail unrest in more resource-endowed jail and prison facilities in Italy and the US. We are not sure what the outcome would be if similar unrest began in the Philippine correctional system.

A temporary relief could be the granting of medical furlough to first-time, low-risk, non-violent, and bailable offenders for humanitarian considerations. PDLs who are charged with offenses such as gambling, theft of less than a thousand pesos, drug use, etc., especially those who are old (above 60 years old) and sickly, could be prioritized for release. These are PDLs that, with money and resources, could have bailed out and could have been released, but largely due to poverty, they are languishing in our jails while undergoing prolonged trials. The BJMP could initiate the process by writing a letter to the Supreme Court on its assessment of the current jail health capacities. The Supreme Court-Office of Court Administrator could then utilize this as a basis for corrective action. A Supreme Court Circular could then be issued where the jail wardens nationwide would be able to identify first-time, low-risk, non-violent, bailable offenders for release. The Public Attorney’s Office, could also make a national pleading on behalf of all the PDLs, similar to what was done in other jurisdictions. The list could then be submitted to the respective judges, and the judges, using their sound discretion could release the PDLs on their own self-recognizance, or even on “One-Peso Bail.” As a condition, the PDLs could provide a promise to appear on the court-appointed dates. The wardens would get their addresses and the contact information of their relatives for monitoring.

These low risk PDLs are not a threat to public safety. Releasing them would ease the over-congestion in our jails. This would give a better chance for our jail staff to concentrate their resources on recidivists, higher risk, violent, and non-bailable offenders (who are also still presumed innocent). By keeping them all in jail at the moment places them in a susceptible condition to acquire the coronavirus. In our over-congested jail, this will be tantamount to a death sentence. Releasing low risk, first-time, non-violent bailable offenders under this medical furlough remedy could be our best chance to avert this incoming tragedy.

It is just a matter of time. – Rappler.com

Raymund E. Narag, PhD is Assistant Professor at the Department of Criminology and Criminal Justice at Southern Illinois University Carbondale.

Clarke Jones, PhD is a Senior Research Fellow at the College of Health and Medicine at Australian National University.