[ANALYSIS] Should Duterte lift the lockdown? An imagined debate 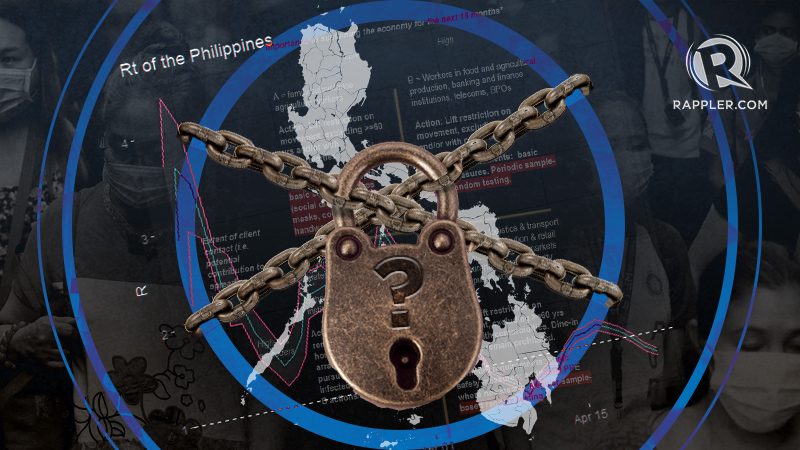 Facebook Twitter Copy URL
Copied
With the COVID-19 pandemic, the stakes are much, much higher. Now is not the time for the capricious, evidence-bereft brand of policymaking Duterte has grown used to and gotten away with.

This could well be President Rodrigo Duterte’s toughest policy decision yet.

On the one hand, his government can’t yet lift the Luzon-wide enhanced community quarantine (ECQ) and reopen the economy without risking the lives of millions of Filipinos. The virus is still out there, and it will only take one rogue, uncontained case for the number of confirmed cases to skyrocket again.

On the other hand, the lockdown is taking a heavy toll on the economy. The longer the ECQ, the deeper the economic downturn we can expect. More Filipinos could go broke and hungry if the hard lockdown lasts for too long.

Clearly there’s a delicate balancing act involved, and there are good arguments on both sides. In this piece I’ll try to present them in an imagined conversation between two friends, Pepe and Pilar.

Have we flattened the curve yet?

PEPE: We can start reopening the economy because there’s some evidence to suggest the epidemic curve has somewhat been flattened.

Experts at the University of the Philippines show that COVID-19’s reproductive number – which measures how transmissible it is among people – has considerably subsided since March and is now hovering around and mostly below 1 (Figure 1).

This suggests the disease is not as transmissible as before, and is more under control thanks to the ECQ. 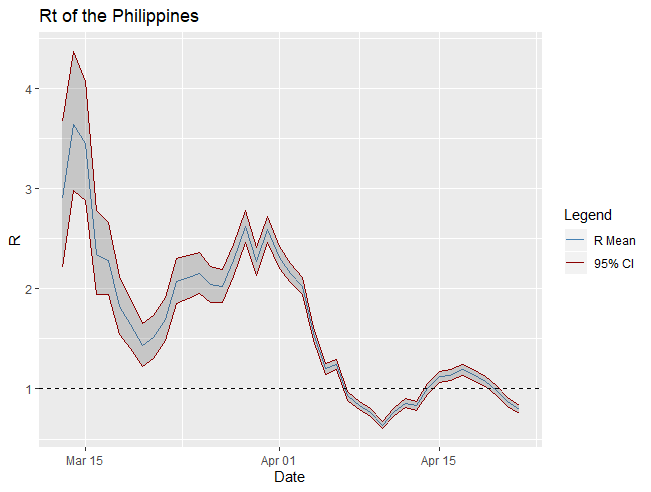 PILAR: Sadly, we still don’t have a good idea where we are on the epidemic curve.

It will be profoundly reckless to reopen the economy without mass testing. Right now, near the end of the ECQ, government is able to conduct only around 3,400 tests a day – a mere 17% of the targeted 20,000 a day.

This testing capacity is even lower now, what with 43 workers of the Research Institute for Tropical Medicine (RITM) testing positive for COVID-19.

Absent mass testing, the next epidemic is just waiting around the corner. Hell could break loose again.

Can some sectors of the economy be opened already?

PEPE: Even with the attendant risks, some sectors can already be reasonably and safely opened up.

According to UP economists, sectors can be classified in two ways: how likely they are to spread the virus, and how essential they are in sustaining the economy in the next year or so (Figure 2).

Schools, malls, theaters, and resorts are not as essential to the economy’s life support and involve lots of people congregating. Hence, they must remain closed.

Agriculture and services like banks, telcos, and BPOs can safely be opened up. But this must be paired by continued physical distancing, personal protective equipment, and periodic random testing.

For workers in high-risk sectors – like drivers, market vendors, security guards, and construction workers – they can go back to work only if, on top of other safety measures, they can be regularly subjected to random testing. Besides, extending the lockdown any further will likely widen the gap between rich and poor. Not everyone can work from home. For many poor Filipinos who live hand-to-mouth and are trapped in “no work, no pay” arrangements, an extended lockdown could be just as harmful to them and their families as the disease itself.

To prevent lots of people from going hungry (even dying) because of the catastrophic loss of economic opportunities, we must carefully begin to reopen some sectors.

PILAR: The above is a good framework, one that policymakers will definitely find useful. But again it hinges on the premise that government is able to carry out testing frequently, widely, and reliably – something government can’t do right now.

Sure, opening up could help revive the economy. But it would be foolish to think we can go back to pre-COVID-19 levels of economic growth any time soon.

And if the country relapses into a second wave of COVID-19 cases – like what’s happening now in Singapore and Hokkaido, Japan – government will likely impose yet another massive shutdown. This will result in another massive economic downturn, and in the process kill more people.

So a premature reopening of the economy presents a lose-lose scenario for both the economy and public health. It will be wiser to extend the lockdown for as long as we could and continue to tide people over with sufficient aid.

PEPE: If government could quickly and seamlessly deliver aid to millions of Filipinos hunkered down in their houses, even I will push for an extension of the hard lockdown.

But we’ve seen in the past weeks the government is woefully incapable of delivering aid quickly and extensively. A month after President Duterte signed the Bayanihan to Heal as One Act, only less than a quarter of the 18 million intended beneficiary households have received their cash grants. (READ: Duterte’s coronavirus aid: Too little, too slow, too politicized)

On top of this, government is dismally cash-strapped. Government officials keep trumpeting they have a war chest of more than a trillion pesos to fight COVID-19. But this is an illusion they can only pull off by conflating budget and cash. (READ: A deeper look at Duterte’s finances to fight the coronavirus)

Until government can assure us they have enough money to sustain current and future aid programs, it may be better to allow Filipinos to resume their jobs rather than wait for aid that’s not coming.

PILAR: If aid is too little and slow, we need only to pressure government to step up their efforts.

There are plenty more ways government can provide economic relief to Filipinos. For instance, Representative Stella Quimbo, an economist by training, has come up with an economic rescue package to the tune of P370 billion. This consists of paid sick leaves, wage subsidies, interest-free loans, loan guarantees, and various grants.

As for the cash problem, there are a number of possible sources such as dividends from government-owned and controlled corporations, proceeds from the auction of government securities, bridge loans from the Bangko Sentral ng Pilipinas, and loans from multilateral institutions.

If government can effectively ramp up its relief efforts, the Filipino people can weather a longer lockdown – and, in the end, save more lives.

The decision must be evidence-based

Whatever Duterte’s final decision, it must be logical, grounded on well-defined parameters, and evidence-based.

That’s what worries me the most.

Since he took office in July 2016, Duterte has all too often pursued sweeping policies – such as the war on drugs and the Boracay shutdown – that didn’t benefit from any careful study whatsoever. (READ: Enough of policymaking without planning)

With the COVID-19 pandemic, the stakes are much, much higher. Now is not the time for the capricious, evidence-bereft brand of policymaking Duterte has grown used to and gotten away with.

On Monday, April 20, Duterte did sit down with policy experts to weigh his options.

But will he listen to reason this time? – Rappler.com

The author is a PhD candidate and teaching fellow at the UP School of Economics. His views are independent of the views of his affiliations. Thanks to Jeff Arapoc, Rainier De La Cruz, and Zy-za Suzara for helpful comments and suggestions. Follow JC on Twitter (@jcpunongbayan) and Usapang Econ (usapangecon.com).