[ANALYSIS] Rare Philippine recession: Why this one’s unique, even necessary 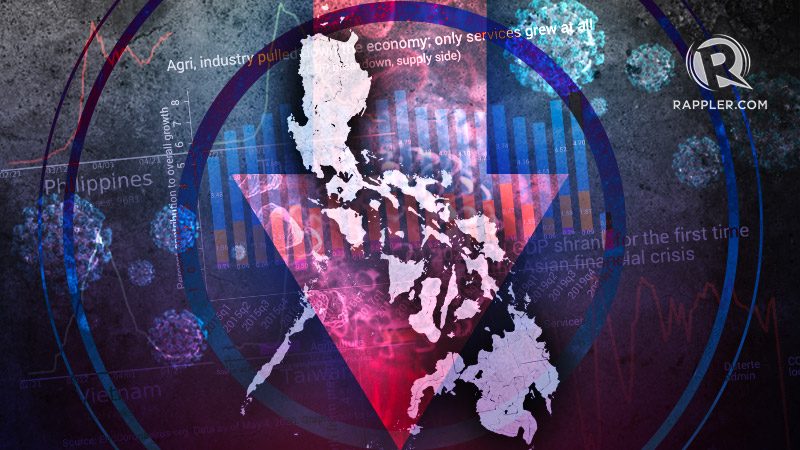 Facebook Twitter Copy URL
Copied
Let’s make this recession and our collective sacrifice count. But that won’t very well happen if government fails to set its priorities right and get its act together fast.

This is not your typical recession.

On Thursday, May 7, the Philippine Statistics Authority (PSA) made a historic announcement: the Philippine economy shrank for the first time in 22 years.

The nation’s income – as measured by gross domestic product or GDP – contracted in the first quarter of 2020 by 0.2% vis-à-vis the same period last year.

Figure 1 shows that the era of impressive, uninterrupted growth is over. We’ve never seen negative growth since 1998 or during the Asian financial crisis. That’s practically a generation ago. (On a personal note, I was still in Grade 4 and playing Pokémon on my Game Boy then.) By convention, we need at least two consecutive quarters of negative growth to declare a recession. But even now it’s safe to say we’re right smack in one: the economic managers themselves foresee even grimmer numbers next quarter.

Historic and rare as it is, this recession is also unique: rather than it falling onto our laps, we actually forced it to happen. And it’s probably for the best.

Government attributed the economy’s shrinkage partly to the eruption of Taal Volcano in mid-January. But it goes without saying that by far the biggest factor in all this is the COVID-19 pandemic.

By suspending classes, closing malls, shutting down public transportation, and forcing as many people as possible to hunker down in their homes, we’re minimizing the face-to-face interactions by which COVID-19 could spread.

In effect, you might say we’re “freezing” the Philippine economy and putting it in forced hibernation. A downturn should not come as a surprise. (READ: ‘Freezing’ the PH economy: Can we survive it?)

But what surprised economists is how fast growth reached the negative territory. A poll of private economists showed a median GDP growth forecast of 2.9%. At first glance that’s not unreasonable: after all, the first quarter data are bound to capture only half a month of quarantine measures (from March 15 to 31).

Yet here we are. Maybe this attests to the effectiveness of the government’s lockdowns – first imposed in Metro Manila, then expanded Luzon-wide. Alternatively, this could tell us some sectors (like tourism) might have already been ailing weeks before the initial lockdown.

In any case, government expects the second quarter to be a bloodbath, capturing a month and a half of lockdown – possibly longer.

The economic carnage so far has put tremendous pressure on government to ease the nationwide lockdowns soonest. But until a vaccine is discovered and administered en masse, government is really caught between a rock and a hard place.

Reopening some sectors with a low risk of transmission could save people’s jobs and incomes. But it could also pave the way for a new wave of cases and deaths. (READ: Should Duterte lift the lockdown? An imagined debate)

How did sectors fare?

The first quarter data lay bare the fact that the Philippine economy is not pandemic-proof. While some sectors are weathering the crisis, many others aren’t.

The green bars in Figure 2 show that our economy’s growth has historically relied on private households’ consumption spending: more shopping, more eating out, more going to the movies.

But last quarter consumption was jarringly stagnant: its growth contribution plummeted from a little over 4 percentage points to nearly zero.

At the same time, all forms of investment – like the construction of new houses or production of new machinery – also shrank compared to 2019. Note that investments had already been unusually weak some quarters prior.

Only government spending pulled up growth somewhat, coupled by a fair improvement of net exports. The latter could be a sign of weakness, actually: it signals that not enough imports are coming in to fuel domestic consumption and investment. Figure 3 tells the story from the perspective of the economy’s key sectors.

Agriculture contracted a bit, but this should shock no one: agriculture has been woefully weak for many years now.

Much more unsettling is the rare contraction of industrial sectors: manufacturing, mining and quarrying, and even construction. Of these, manufacturing took the greatest hit: again not surprising given how COVID-19 broke up essential supply chains in and out of the country. (Interestingly, the sole industrial sector that grew was electricity, steam, water, and waste management.) Finally, of the country’s 3 main sectors, only services grew at all – a testament to its robustness and diversity.

In fact, nearly all service subsectors grew in the first quarter. Health and social work naturally contributed more to growth. But financial and insurance services, as well as information and communication, were virtually untouched.

Only 3 subsectors in services shrank, and expectedly so: transportation and storage, accommodation and food services, and entertainment and recreation.

How to thaw the economy?

In the run-up to May 15, government will again decide whether and how best to lift quarantine measures and thaw the economy after weeks of freezing. Many areas in Luzon have already been placed under “general” rather than “enhanced” community quarantine, entailing freer mobility and economic activity.

Economists at the University of the Philippines suggest two criteria in choosing which sectors to reopen: how essential they are for sustaining the economy in the coming year or so, and how likely people engaged in them will transmit the disease.

While farms and some factories can be opened up with sufficient masks and social distancing measures, schools, gyms, and sit-down restaurants are perhaps better closed still.

The latest GDP data could help policymakers identify sectors which have weathered the economic crisis so far, as well as those which will need more support in the coming months.

But beyond the more immediate policy concerns, this is as good a time as any to rethink the structure of the Philippine economy.

Do we really want it to be driven by consumption spending and services, both of which entail a lot of congregating and face-to-face interactions relative to, say, investment spending, agriculture, or industry?

And what’s the optimal role of government in a pandemic? How can it shore up the economy and support segments of the private sector for several months on end?

We need to answer all these if we are to make the Philippine economy contagion-proof.

To reiterate, the purpose of this induced recession is to abate the spread of COVID-19 and flatten the epidemic curve. But are we achieving that?

Unfortunately, it doesn’t seem so. International data as of May 4 show that the Philippine epidemic curve is far from being flattened – as it already is in many other countries, including neighboring Thailand, Vietnam, and Taiwan (Figure 4). Health spending is also not up to par. Government also missed its target of 8,000 COVID-19 tests per day by end of April. And rather than pour resources on hospitals and Test, Trace, Treat – which will be absolutely essential if we are to reopen more sectors of the economy – government wants to push Build, Build, Build instead.

Government seems preoccupied with other things. For instance, without remorse, it ordered the closure of ABS-CBN, putting at risk as many as 11,000 jobs and needlessly compounding the economic crisis.

Let’s make this recession and our collective sacrifice count. But that won’t very well happen if government fails to set its priorities right and get its act together – fast. – Rappler.com