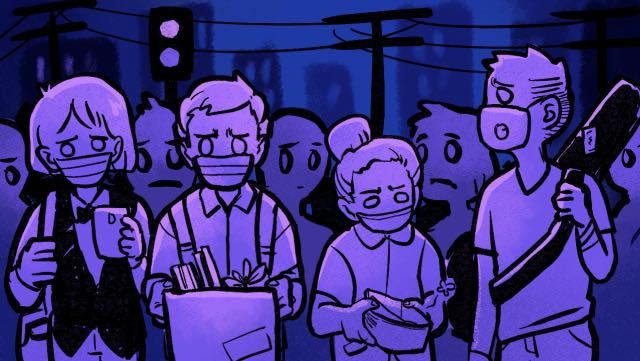 This could well be the grimmest jobs report of the Philippines on record. Yet Duterte doesn’t seem to care.

Last week the Philippine Statistics Authority (PSA) reported that in April 2020 the country’s unemployment rate skyrocketed to 17.7% — the highest since the earliest comparable data in 2005 (Figure 1).

This translates to about 7.3 million Filipinos who were available to work and seeking work, yet without jobs.

Obviously the culprit is the COVID-19 pandemic, which ground the Philippine economy to a screeching halt and brought about its first contraction since the Asian financial crisis.

But there’s more to the jobs report than meets the eye. The extent of economic misery goes well beyond the unemployment figures — probably something government will do well to pay attention to.

How many jobs did the pandemic wipe out?

As recent as January, 42.7 million Filipinos were employed. But in April that dropped to 33.8 million. So you might say the pandemic wiped out 8.9 million jobs in just a span of 3 months.

A little over half of that, or 4.9 million, belong to the ranks of the newly unemployed: as some employers’ cash flow dried up and expenses piled up, they simply couldn’t afford to retain some or all of their employees.

What about the 4 million other jobs that the economy shed? That’s accounted for by people who simply dropped out of the labor force.

The second tab in Figure 1 shows the labor force participation rate (LFPR), or the percent of all Filipinos age 15 and above who are actively in the labor force, and are either employed or unemployed.

The LFPR, now less than 56%, is at an all-time low. Between January and April, 4 million Filipinos dropped out of the labor force because of the severe drought of job opportunities.

These are victims of the pandemic, too, yet technically they can’t be counted among the ranks of the unemployed.

Heck, even those lucky enough to retain their jobs are in pain.

The third tab in Figure 1 shows the underemployment rate, which comprises those with work but who want to work more hours or earn additional pay.

This, too, shot up to 18.9% — not quite as high as the jump in the unemployment rate, but still the highest since before President Rodrigo Duterte came into office.

This comes as no surprise if you note that huge swathes of the population worked fewer hours from January to April. The average number of hours put in by a worker in a week fell from 41.3 to 35 hours, a difference of 6.3 hours.

Finally, a whopping 12.6 million more Filipinos had jobs but didn’t report to work due to the pandemic.

If you add up all these people — those who lost their jobs, left the labor force entirely, and kept their jobs but are now working fewer hours or can’t be at work — you’ll get a much better sense of the scale of the jobs crisis in our midst.

Which sectors were hit the most?

Job losses were recorded in all sectors of the economy, but some were more hurt than others.

Of the 8.9 million jobs the economy shed from January to April, about 11% of them were from agriculture, and about a quarter were from industry (particularly construction and manufacturing).

By far the most affected sector was services, accounting for 64% of all lost jobs. This is hardly surprising: services rely the most on face-to-face interactions through which the virus could easily spread.

Figure 3 shows that the most affected service subsectors were wholesale and retail trade, transportation and storage, and accommodation and food service activities.

As expected there were also tremendous job losses among the ranks of teachers, as well as artists, musicians, and other performers. But surprisingly, some 308,000 jobs were also lost in public administration and 103,000 in health and social work — services you’d think would be crucial in the pandemic response, and would therefore hire more rather than fewer people.

Overseas Filipino workers (OFWs), too, were badly hit by the pandemic. They were not really part of the April jobs report, but as of May 31 more than 36,000 OFWs have already been repatriated since the pandemic started, and nearly 100,000 more are stranded in different parts of the world, waiting to go home.

Hopefully, a vast majority of the massive layoffs we’ve seen will be temporary, and displaced workers can return to work ASAP.

Metro Manila’s general community quarantine (GCQ) aims to hasten that process. But until a vaccine is discovered and administered to the majority of Filipinos, the pandemic will continue to thwart a full economic recovery. Already, various think tanks expect the country’s GDP growth figures to be in the red for the entire 2020.

Bringing back some jobs will also hinge on the government’s ability — nay, willingness — to implement mass or widespread testing. But until now government has failed to resolve its massive backlogs and has repeatedly fallen short of its testing targets.

For Filipinos who really cannot go back to work despite precautions, aid must come swiftly and reliably to them. But till now Congress has fallen short of passing legislation that could significantly expand aid for businesses and their workers in the form of, say, zero-interest loans or wage subsidies. (READ: House approves P1.3-trillion economic stimulus package vs pandemic)

But now is not the time to scrimp. The more we delay aid the harder it will be for businesses and their workers to bounce back.

Finally, government must take better care of OFWs who still haven’t been repatriated, who are stuck at quarantine facilities for months on end, and who can’t go back to their provinces for want of adequate transportation options.

For all of Duterte’s past rhetoric, it doesn’t seem he cares much for OFWs after all.

Right smack in the middle of a pandemic, the country’s first recession in two decades, and the worst jobs crisis on record, the Duterte administration somehow sees fit to focus on other things, notably the speedy passage of the Anti-Terror Bill of 2020.

Once signed, many groups rightly fear this new law will cement Duterte’s stranglehold on power, ramp up his attacks on the opposition and other dissenters, and open the floodgates for more human rights abuses — in a regime already marked by so many.

Needless to say, government’s energies will be much better spent trying to abate the country’s many real crises — not on inventing new ones, as if we don’t have enough to go around. – Rappler.com