Tightening the noose on money launderers

May 24, 2012 1:52 PM PHT
Teofisto Guingona III
Facebook Twitter Copy URL
Copied
A strong anti-money laundering regime is a step toward the end of corruption. Public funds intended to benefit the people often end up in a private person's bank account. 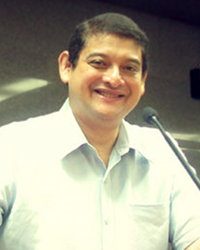 On a good day, the intricate marriage of commerce and technology is stimulating. With the innovations that we are seeing today, we are able to do business with more people, in a greater number of countries, and in less amount of time that we used to need a few decades ago.

For an emerging economy like the Philippines, these gifts are most welcome. Technology and commerce must serve the needs and hopes of the people.

However, we must remain cautious of the fact that commerce and technology are also constantly being used by scrupulous groups and individuals who take advantage of the speed and convenience offered by this modern world to steal, divert, and profit from unlawful activities through ever-expanding schemes for money laundering.

We better make sure that the wonders of technology in whatever form are actually used to serve the needs and hopes of the people.

That commercial and financial transactions used with the aid of technology are the legitimate kind—the kind that actually contributes to meaningful economic growth and more importantly, more meaningful and decent human lives.

We can do this in various ways. The Senate has been doing to address money laundering, terrorism, and terrorist financing.

I am privileged to stand as the sponsor of 3 legislative measures that seek to strengthen the anti-money laundering regime of the country and to combat terrorism and its lifeline, terrorist financing.

First, we seek to allow an ex parte inquiry into the accounts of persons when there is probable cause that the funds therein are related to money laundering or an unlawful activity or a predicate crime.

This proposal is necessary in light of a lamentable decision of our Supreme Court which ruled that before the Anti-Money Laundering Council can look into an account, it would have to inform the concerned person: a de parte inquiry.

As a result, once informed, many have resorted to emptying out their bank accounts before the government can inquire into them. Logic and necessity demand that we allow for an ex parte inquiry.

Second, we seek to empower the AMLC to inquire into not just the main account but also related accounts, defined as “other bank deposits, investments, or other monetary instruments, owned or controlled by the person whose account is the subject of freeze order, or the funds of which originated from, or were transferred to such account.”

As the chairperson of the Senate Blue Ribbon Committee, I have witnessed the usual scheme wherein funds that are unlawfully acquired or stolen from government are moved from one account to another, with the clear purpose of keeping it away from the reach of the authorities.

People have laundered funds from their accounts to the accounts of their wives, brothers-in-law, drivers, and every conceivable person within their network.

The first two proposals that I just discussed are contained in Senate Bill 3009.

To further strengthen our anti-money laundering regime, I am also sponsoring Senate Bill 3123, a bill which lays the foundation for the Philippines’ full compliance with the international standards set by the Financial Task Force and the various international conventions transnational crimes, traffic of narcotics and corruption.

Senate Bill 3213 seeks to do the following:

1.      It expands the definition of “money laundering” in significant ways. From mere “transaction,” it now includes the “conversion, transfer, movement, disposal of, possession, use, and concealment or disguise” of the monetary proceeds of a criminal act.

Money nowadays is not only laundered through banks but also through a whole gamut of institutions which will now be covered by our proposed amendments: foreign exchange corporations, money changers, remittance centers and similar establishments, pre-need companies, casinos including those which operate on-line gaming, real estate agents, dealers in precious stones and metals, and several others.

We are expanding the list because we know that as we tighten the noose on those using the formal banking system to launder ill-gotten funds, they have begun to look at other tools in which they can park such money.

When crooks get creative, they depart from simple “money laundering” and resort to “dry cleaning” of ill-gotten wealth too.

3.      Because we recognize that money laundering is used to hide the proceeds of so many types of unlawful activities, we have likewise expanded the list of predicate crimes to include, among others:

Lastly, I am defending Senate Bill 3127 which seeks to cut terrorism’s lifeline: financing. This bill seeks to do the following:

1.      It criminalizes terrorist financing as an offense separate from the crime of terrorism. Mere financing, despite the non-accomplishment of terrorist acts will be penalized.

2.      It penalizes any person who deals with properties or funds owned or controlled by terrorist organizations or those that have been seized and sequestered under the Human Security Act of the Philippines.

3.      It mandates the AMLC to investigate any property or funds that could be related to financing terrorist elements and activities.

Despite opposition from certain sectors, I will continue to defend these bills because of three reasons: to stop corruption, to build a stable financial system, and to send a message of financial integrity.

A strong anti-money laundering regime is a step toward the end of corruption. I believe that money laundering, especially if it arises from and because of acts of corruption, impact directly on the Philippine economy. Public funds that have been intended to benefit the people, especially the poor, often end up in a private person’s bank account. We need to ensure that this leakage of public funds will be halted.

A strong anti-money laundering regime is a message that we, as a country, believe in integrity in our financial and business transactions. That we will commend those who profit lawfully and penalize those who steal from the government or its people and go one step further by hiding the fruits of the crime.

The question often asked of us these days is this: how can the Senate attend to these urgent bills when we seem so focused on the ongoing Impeachment Trial?

The answer is this: we are doing everything humanly possible to make sure that these bills are passed into law soonest.

The public is aware that the Senate sits as an impeachment court every afternoon, from Monday to Thursday. What the public may not know is that the Senate devotes the mornings of those days to sessions and committee work for pending legislation.

We are aware of the necessity and urgency of doing so.

We value our commitments to the community of nations and appreciate the importance it has placed on curbing corruption and terrorism. That commitment is foremost in our minds as we hammer out the final versions of these pieces of proposed legislation.

And, we are aware, too, of the heavy toll that corruption exacts on our economy and our people.

We will not rest until the elements that perpetrate and perpetuate this form of evil find no useful tool in which and through which to conceal the moneys they have illegally acquired.

We are doing this for our children to whom we shall all be accountable from the quality of the ethical, moral and economic environment they will inherit for us.

I guess, that does make the task really, really urgent. – Rappler.com

(These are excerpts from a speech delivered by Senator Guingona on May 24 at the Best Practices and Standards for Anti-Money Laundering Compliance forum in Makati Shangri-la Hotel.)