On climate change: A message from NY to Paris

Sep 25, 2014 6:15 PM PHT
Facebook Twitter Copy URL
Copied
Cooperative action could perhaps be the best bet to bring together, in the words of President Aquino, a global maximum effort that will deliver a climate agreement that is fair, balanced, and in line with the principles of the Convention

It is clear that the road to a new climate agreement in Paris next year will continue to be a long and hard one. From New York, this week, we got mixed messages. But we have no choice but to move forward with determination and hope. With climate change upon us, we cannot afford anger and blame, and certainly not feelings of despair and powerlessness.

Over 120 heads of state took to the podiums of the United Nations (UN) headquarters in New York last September 23 to deliver what could be commitments and actions that would hopefully solve the looming climate crisis.

World leaders faced an expectant international community – represented by the 400,000-strong march that took to the streets of New York two days prior to the big event – at the United Nations Climate Summit on Wednesday, a high-level platform organized by UN Secretary-General Ban Ki-moon aimed at accelerating the slow, laborious, and intense negotiations of the United Nations Framework Convention on Climate Change (UNFCCC). States are due to agree on a new climate deal in Paris next year. As the clock counts down to the Paris conference, developing countries used the Summit to deliver a strong and clear message to developed countries: we cannot and should not act alone.

Nepal, the current chair of the group of least developed countries (LDCs), highlighted in its intervention the difficult challenge that climate change poses to national development: poverty eradication becomes next to impossible in the face of the adverse effects of climate change.

This was a recurring theme throughout the interventions of most developing countries, most especially for LDCs and Small Island Developing States (SIDS). Mentions of Typhoon Yolanda reinforced the fact that developing nations are most vulnerable to climate change.

Bolivia, who spoke on behalf of the 130 nations of the Group of 77 and China (G77+China), had 3 core messages: 1) ambition must be increased; 2) financial pledges of developed parties must be clear; and 3) commitments must be made in accordance with the principles of equity and common but differentiated responsibilities (CBDR).

These 3 issues are the most pressing and most fundamental to the climate change negotiations, and many heads of state chose to emphasize them. Brazil reiterated the importance of CBDR, along with equity, in creating the 2015 agreement. Kenya emphasized the importance of balancing both mitigation and adaptation needs in the Green Climate Fund (GCF). Nauru underlined the important role of developed countries in taking the lead in the process, a point that was echoed many times by other developing nations. For these nations, concrete leadership from developed countries, especially in mitigation and finance, is sorely lacking in the negotiations.

At the conclusion of the Summit, however, it is unclear if developed countries are willing to provide the Paris conference with the kind of leadership that it needs in order to reach an equitable agreement.

Developed country parties did pledge to reduce greenhouse gas emissions and increase financial contributions, although it could be argued that ambition has been left wanting.

There were also some developed countries that made notable emissions reduction pledges. The United Kingdom committed to cutting 80% of emissions by 2050, the European Union pledged a 95%-reduction by 2050, and China declared that they would be cutting carbon intensity by 45% by 2020 over 2005 levels.

However, the United States, a major emitter, did not put forward definite emission reduction targets, along with India, whose head of state did not attend the Summit. Furthermore, only two developed nations – Denmark and Iceland – committed to becoming fossil fuel-free economies. This begs the question of whether the emissions reduction targets put forward are meaningful enough as parties reach the crunch time of agreeing on a new climate deal.

At this point, mitigation and finance still have a long way to go before Paris, but the ambition shown by some countries in both respects is encouraging. Perhaps what was pledged in the Summit could signal the end of business as usual and usher in a era of cooperative action.

President Benigno Aquino III, fresh from his European tour, addressed the Summit and spoke of the actions that the Philippines is currently undertaking to contribute to combating climate change. The Philippines’ disaster risk reduction and management plan was at the heart of the President’s speech, as it highlighted the country’s effective disaster response and unbelievable resolve in the face of natural calamities. This served as an invitation to the international community to look to the Philippines as a model of climate resilience.

The President underlined the willingness of the Filipino people and its government to help solve the climate crisis. He called for a global effort in improving technology transfer and scaling up financial investments to accelerate the country’s environmental strategy.

President Aquino did not offer pledges akin to intended nationally determined contributions (INDCs), but rather assured the international community that the Philippines would do its part, and urged all other countries, especially developing nations, to do the same: “…everyone here has to do everything they can to address climate change without first waiting for their neighbors to engage in action….The Philippines is not waiting. We are addressing climate change to the maximum with our limited resources.”

For President Aquino, the first commitment of countries should be committing their maximum efforts to solving the climate crisis.

Overall, we think the President gave a decent speech. While we still have a lot of work to do with respect to renewable energy and making our energy policy consistent with a low emissions trajectory, Secretary Lucille Sering is correct in defending the President against critics of his speech in that we do have a better energy mix than most countries.

We must not, of course, rest on our laurels and build on the successes of the past, in particular, by encouraging investments in solar, wind, and other new forms of renewable energy in addition to protecting our geothermal and hyrdoelectric sectors.

Moving forward, we believe that the Philippines should now determine its INDCs so we have something to offer by Lima or shortly after. We would also be helped if the President appointed a Special Envoy on Climate Change, preferably a senior diplomat, with the sole job, in the next year-and-a-half, of leading our delegation and making sure we are one of the most effective and influential of the delegations in the UNFCCC.

Our goal in Paris should be to get the most for the Philippines in term of finances and technology, persuade all countries – developed or developing – that emit greenhouse gases considerably to make substantial INDCs and contribute to solve the problem and ensure that climate justice emerges on top of the climate agenda through an effective loss and damage system.

In addition, countries must be persuaded to play a facilitative and mediation role to enable the Paris climate change conference to be successful through the adoption, finally, of good and effective agreement on climate change. 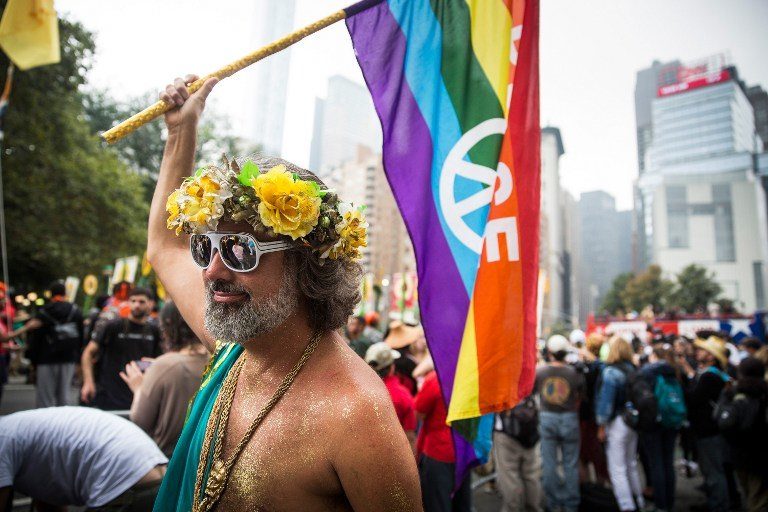 Maximum effort was what 400,000 people demanded from heads of states as they marched along the streets of New York City – and thousands of others in companion marches all around the world – days before the Summit opened.

Ban Ki-moon, along with former US Vice President Al Gore, New York City Mayor Bill de Blasio, and primatologist Jane Goodall joined the marchers in an act of solidarity. Celebrities like Mark Ruffalo, Edward Norton, and UN Messenger of Peace Leonardo DiCaprio were also there to support the movement. Dubbed the “People’s Climate March,” it was the single biggest climate protest in history.

However, the Summit left these hundreds of thousands of climate activists with much to be desired. Oxfam International did not have high expectations to begin with, anticipating very little ambition to be put on the table. Civil society organizations such as the Third World Network have deemed the Summit a “talk fest,” with most developed countries keeping quiet about contributions to the GCF.

The European Union and United Kingdom were called out for reiterating old pledges and not committing to new ones. Bill McKibben from 350.org, the principal organizer of the People’s Climate March, was unsatisfied with President Barack Obama’s intervention during the Summit, as there was no mention of actual targets in his speech.

Thus it came as a surprise that the only major emitter that received some positive feedback was China. According to the World Resources Institute, China’s emphasis on South-South cooperation will be important in reaching an agreement in Paris next year. The country’s announcement that it will strive to decrease emissions as soon as possible is also a good sign for its emissions reduction targets.

It should also be noted that despite the criticisms that Obama received regarding the US’ international policies on climate change, he has strengthened domestic leadership in the face of a defiant Congress by issuing new executive orders to help curb the country’s carbon emissions and increase public-private partnerships on national climate change programs. US-based civil society organizations see this as a step in the right direction.

NGOs thought the Summit was perhaps an affront to the hundred of thousands who participated in the People’s Climate March, as they were ready and willing to deal with climate change but were only given hot air.

The UN Climate Summit was meant to engage world leaders in the climate change negotiations and mobilize political will for the climate deal to be agreed upon in Paris next year. While it is clear there is disappointment from civil society, it is also encouraging that most of the world’s leaders once again have climate change on top of their agendas.

Along with pledges made by developing countries, there is some reassurance that Lima could be fruitful, and that Paris could deliver an equitable deal.

It certainly will not be easy, but the picture of unity and increased cooperation that developing nations showed during the Summit will be the beacon of light during the next two conferences. Cooperative action could perhaps be the best bet to bring together, in the words of President Aquino, a global maximum effort that will deliver a climate agreement that is fair, balanced, and in line with the principles of the Convention.

The long road to Paris is paved with difficult decisions – the world’s leaders certainly have their work cut out for them. – Rappler.com

Mima Mendoza is a research associate of the Ateneo School of Government where she is a member of the Climate Change and Environment team. She is a veteran of the climate change negotiations as a youth delegate for the Philippines.