Hope in our youth

Dec 31, 2014 3:01 PM PHT
Facebook Twitter Copy URL
Copied
Much work still needs to be done – by the youth themselves, and by those who hold the keys to their political and economic education – to mobilize young Filipinos as a potent force for progress 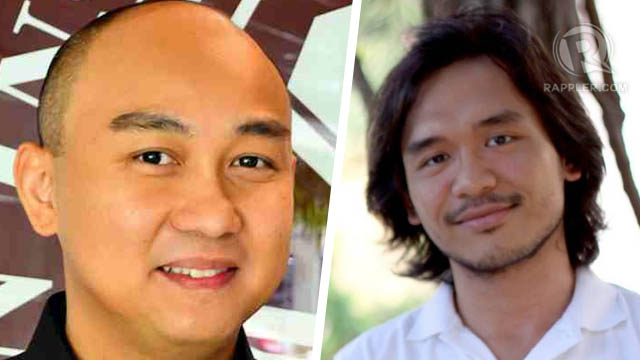 Jose Rizal once said that the “youth is the hope for our future.” In that case, our country needs to prepare for a lot of hope, and the investments to back this.

While countries like China and Japan face rapidly aging populations, the Philippines still anticipates its “youth bulge” – a peak in its youth population.

Based on UN population projections, Filipinos aged 15-24 in the Philippines will peak at roughly 25.09 million by the year 2055. Furthermore, our country’s dependency ratio– those aged 0-14 (children) and those aged 65 above (elderly) expressed as a share of the rest of the population – will continue to decline until it hits a trough around 2050. This means more workers, consumers and taxpayers – all good foundations for a stronger economy. 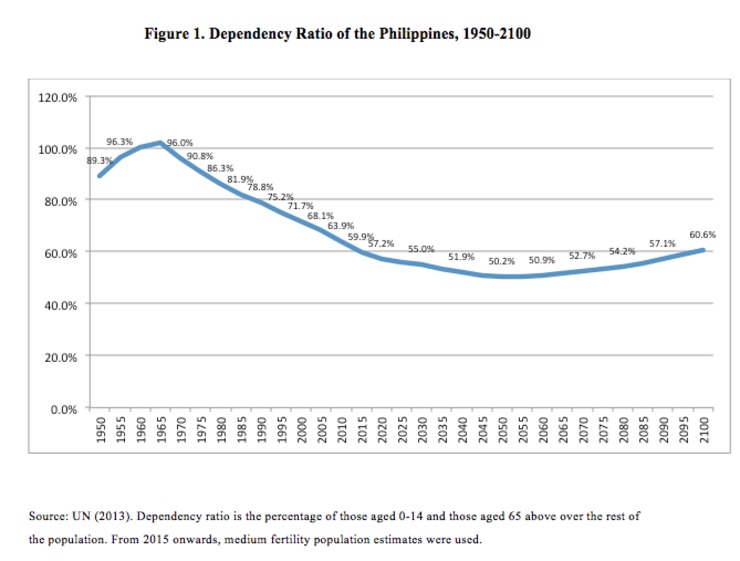 The Philippines will also be the youngest ASEAN economy by 2050, if measured by the share of youth in the total population. If one considers only those countries with populations over 100 million in the entire world, our country will be in the top 10 by that year (see Figure 2).

International investors also see the country’s development potential, due in large part to its favorable demographics. HSBC, an international investment bank, for example, projected that the Philippines could be the biggest economic success story in the next 40 years, leapfrogging over 27 countries to potentially become the 17th largest economy in the world by 2050. The key variable underpinning this optimistic forecast is our young and skilled population which is expected to grow even larger in the next few decades. 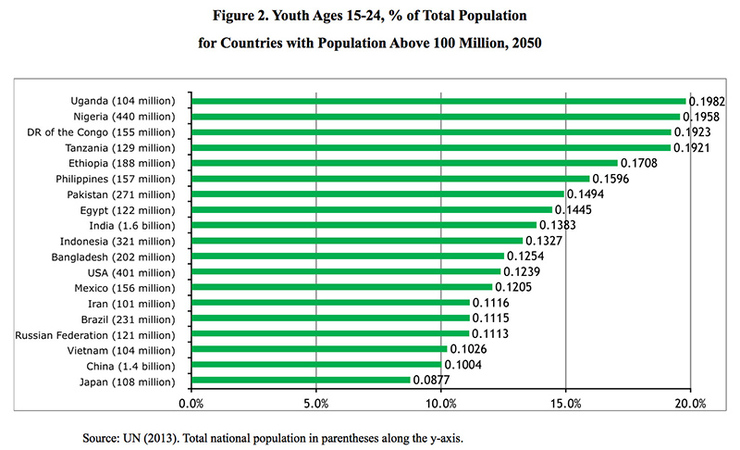 Another upside from our youth bulge is if this presents an opportunity to press for and sustain fundamental reforms. Presently, the Filipino youth account for about 40% of the total voting population. In each presidential election between 2010 and 2040, there will be well over 10 million potential new youth voters joining the electorate. It is no wonder that many politicians are branding themselves as “youth candidates” in order to secure this large voting cohort. 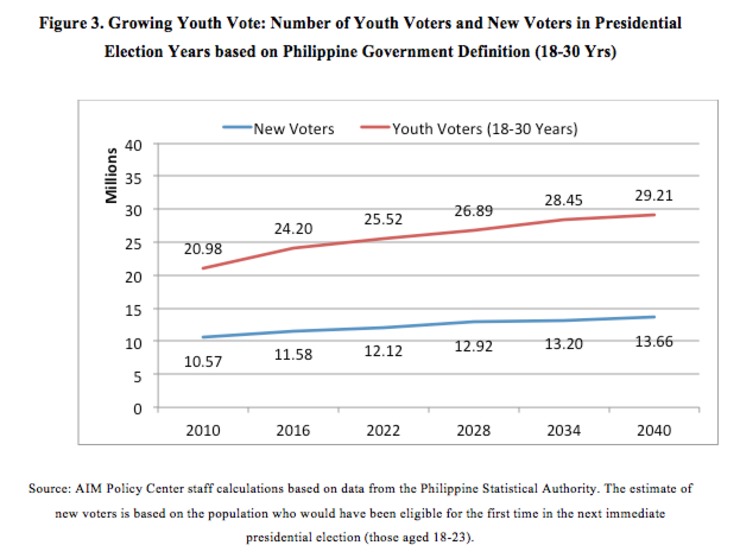 Just as in other countries where favorable demographic conditions ushered economic and political reforms, the Philippines may have the opportunity for a dramatically altered political and economic landscape if the youth sector is organized and informed. It is therefore important to obtain a better understanding of the views of the youth not just as regards their voting preferences, but also on their views on the possibilities and challenges for effecting reforms.

In September of 2012, the Asian Institute of Management Policy Center launched the Pinoy Youth Barometer, an initiative designed to collect and analyze the perspectives of the youth on key policy issues such as education, employment, migration, and politics. The barometer’s quarterly surveys are administered to over 2,000 college students, around the ages of 15-18.

Reforms or more of the same?

The results were sobering. The average proportion of sampled students who voted on the basis of a specific platform across the top twelve senators was approximately only 2%. This was much lower than expected, given the sample was composed of college students, and many expect them to be more discerning voters.

Roughly about a quarter of the sampled students were influenced by the candidates’ television advertisements, further suggesting the power of broadcast media to influence the outcomes of national elections. Another quarter of sampled students indicated that their vote was influenced by the popularity of the candidate’s name, once again emphasizing the power of personality-based (rather than platform based) politics in the country.

Clearly, much work still needs to be done – by the youth themselves, and by those who hold the keys to their political and economic education – in order to mobilize young Filipinos as a potent force for progress.

The youth in the next 40 years will make or break the Philippines. We must do all that we can to help them to succeed, both in the political and economic spheres. – Rappler.com

Ronald U. Mendoza is Associate Professor of Economics and Executive Director of the Asian Institute of Management Policy Center. David B. Yap III is an Economist at the AIM Policy Center This article draws on a draft discussion paper, “Insights from the Pinoy Youth Barometer on the Youth Vote” by Ronald U. Mendoza, David B. Yap III, Beatrice Tanjangco and Aladdin Ko.