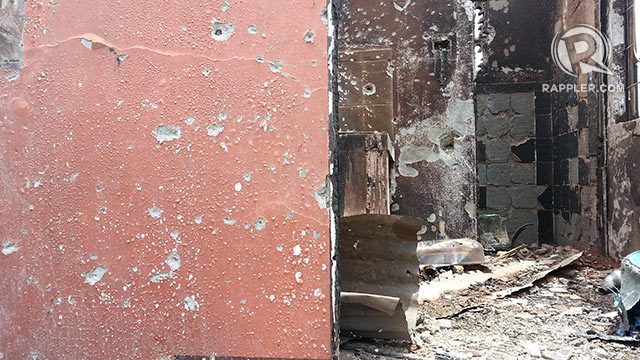 Facebook Twitter Copy URL
Copied
191 people died in the siege of Zamboanga City. More than a year after gunfire punctuated church bells across the city, the death count has more than doubled.

The siege of Zamboanga City lasted 20 days. On the 20th day, the Secretary of the Interior stood in his crisp blue shirt in Sta. Catalina, surrounded by rubble and reporters and the bullet-riddled walls of what were once homes. The hostages are secure, he said. The enemy has been repulsed.

The announcement was made mid-morning of Saturday, September 28, 2013. At least 191 people were killed in the 20 days of what might have been a siege, or a war, or a crisis of governance.

More than a year after the announcement, another 218 people were listed dead.

The 218 names added are not, in the strictest sense, casualties of war. None of the dead were lost by mortar fire, or from the crossfire between Muslim rebels and the military that killed 2-year-old hostage Eithan Ando.

The causes of death vary. They include diarrhea, pneumonia, dehydration, suspected measles, or, as was in the case of a 65-year-old woman who died at 3 in the afternoon of August 13, 2014, “complicated.”

The city health office says the 218 died in evacuation centers and transitory sites across Zamboanga City. They were civilians, among the 120,000 internally displaced people who ran after the guns began firing. Many of them were children.

On the anniversary of the siege, the Department of Social Welfare and Development (DSWD) committed to a December 15 deadline for the relocation of all displaced to safer transitional shelters. Yet as late as December 29, more than 7,000 people remained at the Joaquin F. Enriquez, Jr. Sports Complex. Another 200 are in the Zamboanga City East West Central School.

And still, the national government insists “no one is forgotten.”

Let us be recognized

Many months after the razing of the villages, families crowded into shelters built into the bleachers of the city stadium, or on the muddy playing field whose red rubber running tracks had long been stripped.

The city government is willing to concede the delay, but they say December 15, 2014 was not a deadline. “It is a target.” DSWD Secretary Dinky Soliman is also “quick to admit” the failure to meet the deadline – according to her recent press release.  She believes, however, that the government’s efforts “should be recognized.”

It is difficult to understand what recognition the government hopes to receive from the public. It is possible they believe that Shiela Arnado, whose 10-month-old baby died of acute gastroenteritis a month before the anniversary, should be grateful for losing only one of five children. There were, after all, mothers who lost two.

This is the government that promised they will “build back better for all the victims” – now an impossibility, as 218 of the victims are dead.

In mid-2014, President Benigno Aquino III asked for understanding over the delays in Zamboanga’s rehabilitation.

“The first priority: to provide shelter to our countrymen who lost their homes to fire,” said the President during his State of the Nation Address.

The President has said very little about the Zamboanga crisis. He has left most statements to deputies and spokespersons. He did speak long and earnestly about the victims of Supertyphoon Haiyan. It would be reasonable to assume he feels the same for the victims of war.

“My conscience would not be able to bear it, if I were to leave you to fend for yourselves, allow the next tragedy to come, and just say that I have done my duty by you,” he said in a speech in Guiuan. “You are my Bosses; I would not be able to do that to you. In each decision I have to make, I continue to be guided by my conscience, by my obligations, and by the demands of true service. As for those who never seem to grow tired of criticizing our every move, I leave them to the Lord.”

The rhetoric of compassion is in full play here, the same as it is whenever the government speaks in the aftermath of conflict and disaster. The language is both defensive and patronizing, claiming a commitment to “long-term solutions” instead of “hasty, stopgap solutions,” while at the same time dismissing all criticism as malicious and unfounded.

The choices are painted in black and white. The correct way is slow but targeted development. The wrong way is fast but irresponsible.

It is a false choice. It’s not quick and dirty against slow and solid. What is happening in Zamboanga today is slow and vicious, with conditions degrading day to day. The government may be pleased to announce they have transferred almost 4,000 of the displaced from emergency shelters to transitional homes, but the displaced have little reason to celebrate.

The Mampang Transitional Site I sits 8 kilometers east from the center of Zamboanga City, well away from schools and markets and hospitals. The government said 4,000 people have been relocated here. The rest will be moved by the end of January.

There is no electricity in the bunkhouses of Mampang. Toilets are clogged, structures do not meet humanitarian standards, and there is no water system beyond a pair of trucks hauling in a supply. Fights break out, clothes are sold for drinking water, garbage layers over soil. A cholera outbreak, quotes Refugee International, is a real possibility. Reports say a full thousand schoolchildren have dropped out of school. It costs P10 on a motorcycle, then another P15 for a jeepney ride every day for child to travel to a classroom – an impossibility for a family with almost no means to make a living. It is the reason why a 38-year-old woman named Rowena Tawaling now has 5 children out of school.

It is a sentiment he returns to often – that he cannot condone the suffering of his people, that he takes personal responsibility, that no one is forgotten.  His deputies are on the field, justifying the delays, lecturing on “rebuilding the trust,” speaking of essentials “beyond the provision of daily needs. ”

The government promises permanent homes for all victims by mid-year of 2015. It is, as they say again, a slow and difficult process. They assure the displaced that they will build back better. The displaced are not assured.

Tens of thousands of people were victims of the siege of Zamboanga. They ran in the dark, to the sound of gunshots, barefoot, hungry, terrified, cradling small children. When they ran, they ran to safety.

The siege of Zamboanga City did not end in 2013. Two hundred eighteen died in the aftermath of the Zamboanga crisis, casualties of a war the government failed to fight. They may have survived bombs and mortars, but they did not survive a government that cares.

No one is forgotten, unless they never mattered. – With reports from Joseph Suarez / Rappler.com