What do ICT stats say about the Philippines? 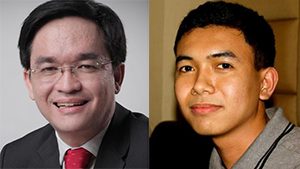 Facebook Twitter Copy URL
Copied
The relatively weak uptake of ICT services in the Philippines, aside from inadequate ICT infrastructure, can be attributed to the high cost associated with it

During the DepED’s National Research Conference held in Koronodal last April 16 to 18, we were tasked to give a plenary talk about “Cutting Edge Research Methods.” In this talk, we showed how collecting and analyzing data has changed dramatically because of information communications technology (ICT), which has spurred the era of Big Data.

We are drowning in a flood of data, with ICT changing our ways of doing things and learning. We could imagine having access to a huge database where we collect every detailed measure of every student’s academic performance drilling down to every answer he/she makes to an exam question, and add to these are information on the students (from the socio-economic profile of his/her family, to his teachers, to whether or not he/she supplements classroom learning with Internet online learning).

This data could be used to design the most effective approaches to education, starting from reading, writing, and mathematics, to advanced college courses. While we don’t have this database yet, but little by little, we are getting there.

The increasing access to the Internet and social media has been phenomenal.

We are Social, an agency that examines social media data, suggests that as of end of 2014, about 42% of the world’s population had access to the internet, and the online social networking application Facebook registered 1.4 billion active users.

It has also been reported that in the PH, as of January  2014,  there were 37.6 million Internet users, of which 34 million were on Facebook. Thus, one in every three Filipinos were on Facebook. Social media is also making various information available to us in various formats. Videos on YouTube are teaching us everything: from how to cook to why you need to study Statistics (#thisisstatistics)

We are drowning in a flood of data, with ICT providing us the means to transmit and exchange data in the form of sound, text, visual images, signals or any other form or any combination of those forms through the use of digital technology.

From the beginning of recorded time until 2003, we created 5 exabytes of data (one exabyte is a billion gigabytes). In 2012, five exabytes were being created every two days; in 2013, this amount of information was being created every ten minutes. ICT has resulted in revolutionizing the way people communicate and for governments and firms to interact and conduct business.

The ICT revolution, most specifically the Internet, has altered the ways people around the world communicate, live, learn, play and work. Even in restaurants, we find menus now being put on tablets for our convenience, and waiters entering our food choices on gadgets.

With the Philippines getting the attention in the world as one of Asia’s fastest growing economies, the presence of a reliable, accessible and affordable Philippine ICT infrastructure is necessary for our participation in the information economy. Without it, the Philippines will once again face the prospect of being marginalized in the global economy. With it, we stand the chance of becoming a cyber-tiger in the new economy.

In November last year, the International Telecommunication Union, a specialized agency of the United Nations for ICT, released its Measuring the Information Society Report 2014  which contains an ICT Development Index (IDI) in the years 2012 and 2013 for 166 countries.

The IDI combines 11 indicators (Table 1) into one composite aggregate measure to monitor and compare developments in ICT. In general, the IDI presents the level of ICT developments among countries over time. Governments, researchers and the general public can use the IDI to measure the digital divide and compare ICT performance across countries.

Table 1. Indicators used in the Computation of the IDI

Among the 166 countries covered in the ITU report, Denmark topped the list followed by South Korea and Sweden.

In Asia and the Pacific, Hong Kong (China), Japan, Australia and Singapore ranked highest after South Korea. The ITU suggested that the IDI exhibits a strong relationship with many indicators for tracking the Millennium Development Goals. The ITU report showed a very clear disparity on ICT development between developed and developing countries. Figure 1. Percentage of (a) households with Internet access and (b) Individuals using the Internet, by level of development, 2005-2014

The ITU showed that in 2013, the Philippines practically maintained its rank (103rd place from 102nd in 2012) despite advances in the areas of access and use of ICT. The country’s ICT connectivity was further improved through the installation of the Boracay-Palawan Submarine Cable System completed in the second quarter of 2013.

Of the 10 members of the Association of Southeast Asian Nations, the Philippines consistently ranked 6th since 2010, trailing behind Singapore, Brunei Darussalam, Malaysia, Thailand and Vietnam (Table 3).

Telephone density, measured as the number of fixed telephone subscriptions per 100 inhabitants, has been practically similar in the Philippines, i.e., from 3.74 out of 100 persons in 2011 to 3.61 and 3.2 in 2012 and 2013, respectively (Table 4). This placed the country only ahead of Myanmar and Cambodia.

To count subscribers, we would have to remove double counts, but telcos do not have information about identities of pre-paid subscribers. Only post-paid subscribers have to register with the telcos, and of course each telco will probably not be willing to share their databases of customers with the other telcos!

Clearly, it is important for a policy on the full registration of cellular subscribers, including pre-paid ones, and for that matter a full implementation of a national ID system. But such registration systems should also discuss legal issues of privacy, which are already being discussed at the global level.

In the ASEAN region, Table 5 shows that Singapore tops the list of having the highest mobile-cellular telephone density at 155.9 in 2013, with Myanmar at the bottom with only 12.8.

In 2013, the Philippines though ranks 8th in the ASEAN region in mobile penetration, only higher than Lao PDR and Myanmar. In 2005, the Philippines ranked 4th but over the years it has been overtaken by Cambodia, Vietnam and Indonesia, which in 2013 ranked 4th, 5th  and 6th, respectively.

Internet usage slightly increased in 2013. There were around 37 percent of the population accessing the Internet, up from 36.2 percent in 2012 (Table 6). This landed the Philippines in 5th place vis-à-vis ASEAN neighbors.

Fixed-broadband subscription per 100 population exhibited remarkable increase to 9.12 per 100 persons in 2013 from 0.14 in 2005 (Table 7). Broadband has been successful building a healthy subscriber base in the country. The increase, however, is on a downward trend. Surprisingly, the Philippines placed second among ASEAN member nations, only trailing behind Singapore.

Available data from ITU show that in 2010, at least 13 in every 100 households in the Philippines had access to a computer, higher than Cambodia’s 9.3 (Table 8). Singapore and Malaysia is considerably higher at 85 and 65 households with a computer.

Meanwhile, in 2010, only 10.1 percent among the households in the Philippines has Internet access, even lower compared to 12.5 in Vietnam. Of course, the information from the Philippines is sourced from a 2010 survey, whereas other countries are more recent.

Table 9. Prices of selected ICT services in PPP$ per month, 2013

This month, the World Economic Forum, in collaboration with INSEAD, published the Global Information Technology Report 2015  which allows countries to catch a glimpse of the current market conditions as well the state of connectivity across the world. It also helps identify areas of improvement to maximize the full potential of the Internet and other innovations in the ICT sector.

The report estimates the Networked Readiness Index (NRI), which rests on six principles:

The index is a composite indicator made up of four main sub-indexes, with 10 subcategories or pillars and 53 individual indicators (Table 10).

In ASEAN, Singapore topped all countries in leveraging ICT towards development. The Philippines’ standing improved, even surpassing Indonesia (Table 11).

Table 12 shows that laws relating to ICTs in the country are sadly not keeping up with what the present market requires to fully leverage ICT. It even deteriorated. There is a clear need for both the executive and legislative branches to address the lack of ICT legislation.

However, the country improved in protecting intellectual property as well as preventing software piracy, which are considered vital factors driving innovation. The country also displayed a great leap in international Internet bandwidth (measured in kb/s per user) (Table 13).

While the Philippines fares relatively poor in ICT access and use, the skills and talents of Filipino IT experts have been viewed to be competitive. Results of a survey by the Far East Economic Review in September 1999, suggested that the Philippines then ranked second to India in terms of quality, cost and availability of skilled IT workers in Asia, making them very much in demand in many parts of the world.

Government and the private sector need to work together toward ensuring that the proper environment exists for ICT to further flourish.

A discussion paper written by Winston Conrad Padojinog, released by the Philippine Institute for Development Studies a decade ago, suggested the need for ICT policies to narrow the digital divide by promoting competition, interconnection and convergence in the ICT sector.

While some progress has been made over the past years, there is still much left to be desired. While the Department of Science and Technology, through the ICT Office, is about to provide free wifi, many point out that it is more important for telcos to work together and with government to considerably improve the speed of Internet and mobile services in the country.

ICT will also need to be diffused better in the education sector. In basic education, there is a need to examine the extent of using ICT in the classroom as we implement the K-12 program.

Higher education students will also need to be more prepared for the ever-growing demands of the information-driven economy, especially in the emerging area of data science. It can readily be observed that ICT has been driving innovative activities, and that the ICT sector constantly needs innovation.

In consequence, the country will need to develop and promote innovation policies so that ICT can be an important element to sustain our economic growth, and to make this growth and prosperity shared by all Filipinos. – Rappler.com