The Philippines should spend more on defense

May 9, 2015 8:43 AM PHT
Zachary Abuza
Facebook Twitter Copy URL
Copied
In terms of per capita defense spending, the Philippines, at $32.9 million, is the third lowest in ASEAN in 2014, ahead only of Cambodia and Indonesia The Stockholm International Peace Research Institute recently released their 2014 database, which shows robust growth in defense spending throughout Southeast Asia. It also shows how far the Philippines has come, and yet how much further it needs to go before it achieves its goal of obtaining a minimal credible deterrent.

In terms of per capita defense spending, the Philippines, at $32.9 million, was the third lowest in ASEAN in 2014, ahead only of Cambodia and Indonesia. 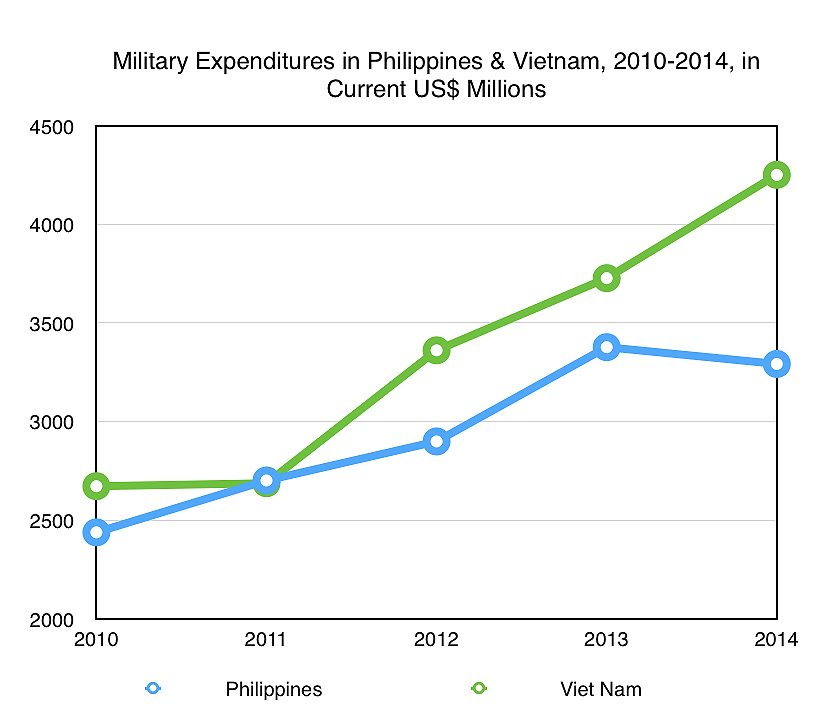 The Philippine government is starting to make long needed investments in its military. The government of President Benigno Aquino III is implementing a $1.8-billion modernization program for the Armed Forces of the Philippines (AFP), but it comes after years of neglect. Between 2010 and 2014, Philippine defense spending increased, 35%, near the ASEAN average of 37.6%. But this was far below Vietnam (59.1% increase) and Indonesia (50.6%).

In July 2014, President Aquino proposed a P115.5 billion (US$2.6 billion) defense budget, 29% increase over 2014. But this was actually a decline, representing only 4.4% of total government spending and 0.8% of surging GDP. Sadly, only P15 billion, or 13%, was earmarked for modernization and procurement. The AFP leadership recently said they want at least 1% of the annual budget to finance modernization; this is totally insufficient.

Many will point out the obvious fact that the Philippines is a poor country. By contrast, Singapore accounted for over a quarter of ASEAN’s defense spending in 2014, or as much as Vietnam, the Philippines and Myanmar combined. But the Philippines currently has the fastest growing economy in the region, between 6.4% and 6.7% in 2015, and it’s important that it start making investments in its national security.

The Philippines has a host of pressing economic and social needs. Investments in education, poverty reduction, public health critical infrastructure and modernizing the bureaucracy are every bit as important, if not more important, than defense.

I am not advocating a defense burden such as in Myanmar, where the defense budget accounts for 13% of a much smaller national budget. That is unsustainable and would set the Philippines back.

But it is important for the Philippines to make investments in the defense of its national sovereignty. Although a treaty ally of the United States and the recipient of $90 million in defense assistance in the past two years, the Philippines has to shoulder its own defense burden.  The alliance created a sense of moral hazard and the subsequent lack of investment left the Philippines in the weak position it is in today. That is not sustainable either.

Even if it can do this, a big if, the Philippines will have far fewer resources for defense than its security needs dictate. Therefore the Philippines has to be smart about its investments. I offer 3 suggestions.

First, Congress must pass the Bangsamoro Basic Law, and not a watered down version that fails to address the aspirations of the people of Mindanao. Nothing would improve Philippine security more than the passage of the BBL. Insurgency has plagued Mindanao for over 45 years, and no insurgent group was defeated militarily. It has been a total drain on the economy, and claimed the lion’s share of the AFP’s budget. Some members of Congress are wringing their hands that the Bangsamoro is a “sub state”, i.e., a violation of Philippine sovereignty.

Yet the MILF has accepted autonomy and has all but renounced the use of force to achieve an independent state. Congress has to get over it and focus on the real threat to the nation’s sovereignty: Chinese encroachment in the West Philippine Sea. The Mamasapano tragedy has been too abused for political grandstanding and positioning ahead of the 2016 polls. The country is so close to a durable political solution that would allow the government to transfer desperately needed funds from the Army to the Navy and Air Force, whose capabilities are completely insufficient. To wit, of the P100-billion budget for 2015, the Army received P41.2 billion, 3 times the amount for the Navy (P13.3 billion). Congress must put the national interest ahead of their own parochial political interests and pass the BBL.

Second, the government and AFP have to be very smart about their defense investments.  Take Vietnam, a country whose GDP (2015 PPP) is 32% smaller than the Philippines. In 2011, the Philippine and Vietnamese budgets were identical, since then, Vietnam’s has outpaced the Philippines, though they are still the closest peers in ASEAN.

But there is no comparison in the military capabilities of the two countries. In the past decade Vietnam has made strategic investments and developed arguably the most modern navy in the region, complete with 6 Kilo class submarines, the largest frigates and newest corvettes, a very respectable air force, as well as the most sophisticated missile arsenal in the region. It has done this, in large part, by leveraging indigenous production under license. Most importantly, Vietnam has maintained its strategic focus on developing a credible deterrent.

Third, the Philippines is so far behind, that it really needs to think about asymmetric warfare.  It will not develop naval or air capabilities that will in any way deter Chinese aggression. China brings on line in a week what the Philippines brings on line in a year. So it needs to think seriously about developing cost-effective measures. These could include, fast attack missile craft, anti-ship missiles, and special forces – capabilities that are hard to defend against. The Philippines has to come up with a clear strategic framework to deal with its near- and medium-term threats.

All of this must be done with rigorous oversight to confront corruption and inefficiencies in the procurement process that have plagued the Philippines in the past. – Rappler.com