May 28, 2015 11:29 AM PHT
Ronald U. Mendoza
Facebook Twitter Copy URL
Copied
The Philippines has effectively arrested its historical decades-long decline. Now is the time for greater ambition, as well as policies and investments to bring the Philippines to the next level. 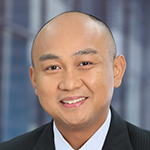 This week the AIM Policy Center, in partnership with the International Institute for Management Development (IMD), is releasing the 2015 World Competitiveness Yearbook (WCY) ranking.

The WCY uses four broad factors in ranking the competitiveness of countries: economic efficiency, government efficiency, business efficiency, and infrastructure. In 2015, the Philippines is ranked 41st among 61 countries – a one notch improvement from 2014.

While this improvement is good news, it follows a four-place drop in ranking from 2014, a five-place improvement from two years before, and a two-notch drop from before that.

Rank-wise, the Philippines returned to its 2011 position. This volatility in our WCY ranking is likely due to a confluence of factors, including how other countries are progressing in their competitiveness-oriented policies, the changes in perceptions of the business environment in the Philippines, and the amount of institutionalization necessary to cement the competitiveness-oriented investments made during the Aquino and previous administrations.

While the former ranks about 60 of the strongest developed and emerging market economies in the world, the latter is an assessment of more than 140 countries, including many of the least developed countries. This, in part, explains why it is difficult to significantly move up the WCY ranking in the short run, since there are many more countries in that ranking who really mean business as far as investing in and reforms for competitiveness is concerned. In the WEF ranking, the Philippines improved from 75th in 2011 to 52nd by 2014 (the 2015 report is not yet available at the time of writing this).

Nevertheless, rankings from these two reports show that there was indeed an improvement in Philippine competitiveness in the medium term.

While progress under the WCY appears quite meager, there is another small consolation.

The near-unchanged position of the Philippines when comparing its ranks in 2011 and 2015 is actually one of the better performances among the developing economies of East Asia. During the same period, Indonesia fell five places from 37th to 42nd, Thailand dropped from 27th to 30th, and China fell from 19th to 22nd. Although Thailand and China are still way ahead of the Philippines, this trend indicates that the gap may be closing, albeit very slowly. In fact, the country overtook Indonesia during this period. 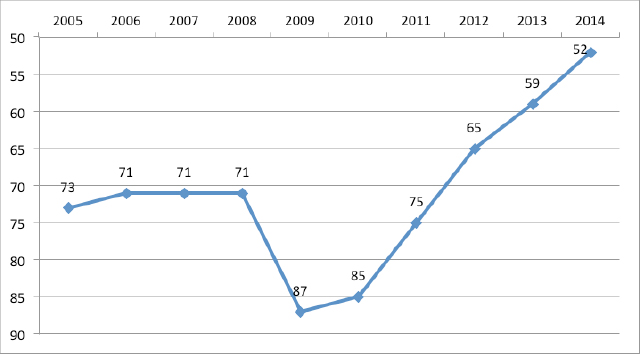 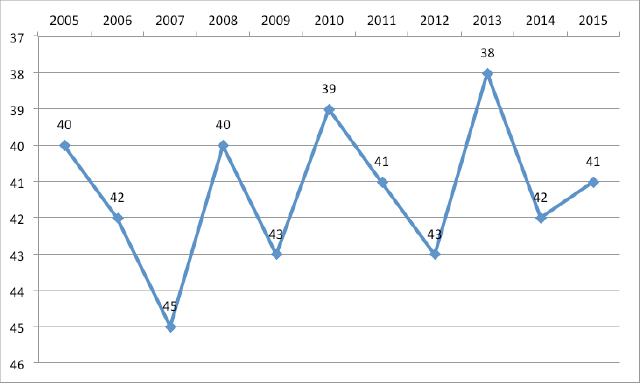 It’s important to juxtapose the competitiveness rankings against hard indicators. Even as perceptions are useful early indicators, tracking key reform outcomes provides a better sense of the possible impact of reforms and what might last.

FDI, for example, appears to be turning for the better. The Philippines posted a 66-percent increase in net FDI inflows in 2014 after a relatively slower 16 percent growth in 2013. This is the third time in the last four years that the country posted net FDI inflow growth greater than 60 percent; and the average annual growth rate over the last five years is roughly 25 percent. Just from 2011 to 2014, total net FDI inflows roughly equalled the ten-year total of the previous administration. Even from a longer historical stretch, and in terms of average annual net inflows, those during the current administration are significantly above those during previous administrations (see Figure 3).

Of course, part of the reason for this is the low base from which FDI in the Philippines is now catching up. These dramatic improvements must be sustained, if the Philippines will ever catch up with its neighbors in ASEAN. 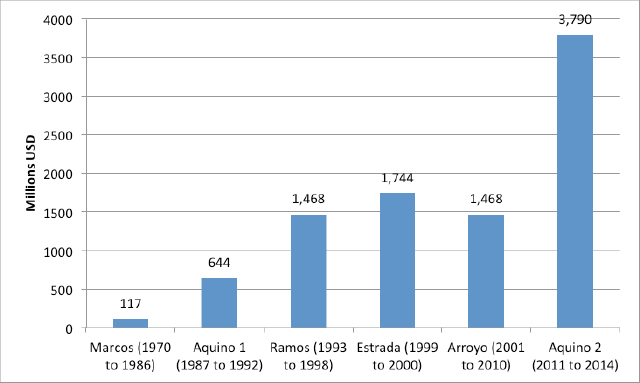 Furthermore, the debt-to-GDP ratio of the country now stands at around 45 percent, the lowest in two decades. This is also way below the 74 percent posted ten years ago, when analysts warned of an impending debt crisis if the then status quo was maintained. As shown in Figure 4, the current administration has been successful in putting its fiscal house in order. This also benefitted from reforms undertaken by economic managers during the last administration.

The recent underspending by some parts of our public sector will mean lost opportunities for stronger and more inclusive growth, and so those should be addressed immediately. More importantly perhaps, the next President will be in a position to increase the country’s borrowing and investments to some degree due to the fiscal space created by this administration.

This further underscores what is at stake next year – we need to select leaders who will stand for good governance and those who will dramatically advance the fight against corruption, given the even larger amount of public resources they could potentially deploy. 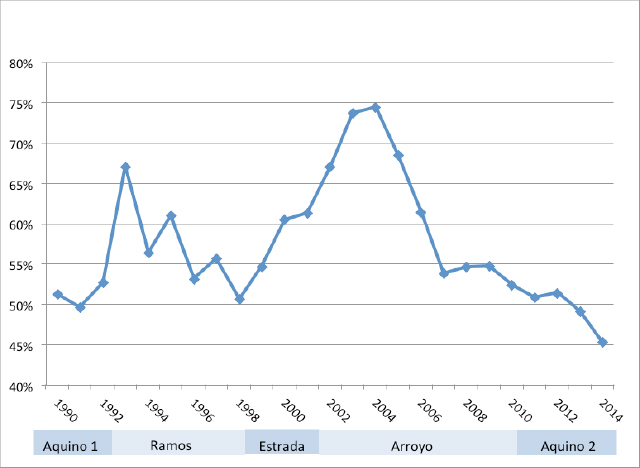 In addition, the Philippines exported almost US$72.6 billion worth of goods and services in 2014, a 7-percent increase from the previous year. This was after a slow 1.5 percent growth in 2013 and a robust 16.9 percent growth in 2012. Over the past decade, exports have not grown consistently. Nevertheless, over the past five years from 2009 to 2014, exports increased at an annual average of 10.9 percent, much faster than the 6.4 percent average from 2005 to 2009.

Consistent export growth could play a critical role in sustained and more inclusive growth. It expands a country’s market beyond what can be absorbed domestically. It opens up channels of technolgy transfer and what economists call “learning by doing”; and it allows for our workforce to stay in the country (with their families), while they help the country earn much needed hard currency to facilitate more investments at home.

This basic formula has been one of the leading sources of inclusive growth among the successful countries of East Asia. As seen in Figure 5, average annual exports in the Philippines reach their highest level in many years under the current administration.

Figure 5. Average Exports per Administration, in constant 2005 US$ millions 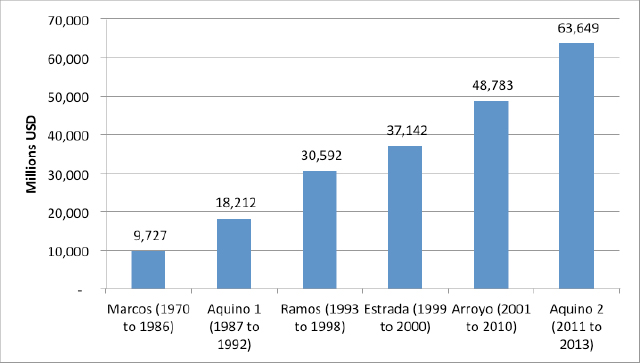 While the country still needs to dramatically ramp up job creation, with at least about one-quarter of the labor force either unemployed or underemployed and many more discouraged workers (as of January 2015), there are some bright spots in terms of human capital investments for future economic competitiveness and poverty reduction.

According to a UNICEF-PIDS study[1], in 2008, there were about 1.2 million primary school aged out-of-school children in the country. Those numbers have gone down to about 900,000 in 2011 and around 440,000 by 2013. Thanks in large measure to social protection policies such as the Pantawid Pamilyang Pilipino Program (4Ps), the country may one day soon achieve near zero out of school children, better equipping the next generation for upward social mobility and a break from poverty. And in terms of real spending on education and health, the Aquino administration tops previous administrations, as shown by Figure 6.

Figure 6. National Government Spending on Education and Health per administration in real terms (in PHP thousands, levels based on 2000 prices) 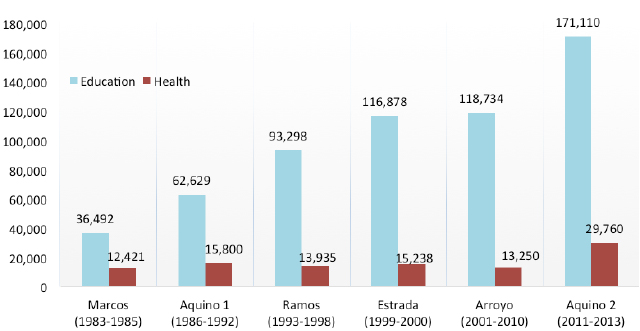 There is no doubt that the Philippines faces many more challenges to close the economic competitiveness gap with some of its neighbors. Energy, infrastructure, addressing peace and order, disaster preparedness, broad-based access to credit by most firms (and not just large firms), as well as sustained fiscal policy and good goverance reforms are only some of the key areas requiring immediate action.

Also worth noting are key legislation that need to be pushed in order to cement good governance and competitiveness-oriented reforms, including: a) FOI in order to sustain and empower citizens in promoting good goverance and more efficient public services; and b) competition policy and anti-trust in order enhance consumer protection and further promote a more “level playing field” across our industries.

And if the country is expected to break into the next higher level of development, restrictions on foreign ownership in certain economic sectors may need to  be lifted, in order to bring in the capital, technology and expertise that could dramatically ramp up the country’s competitiveness and its job-creating potential.

The country has effectively arrested its historical decades-long decline. Now is the time for greater ambition, as well as policies and investments to bring the Philippines to the next level. – Rappler.com

The author is Associate Professor of Economics and Executive Director of the AIM Rizalino Navarro Center for Economic Competitiveness (formerly AIM Policy Center). The views expressed herein are those of the author and do not necessarily reflect those of the Asian Institute of Management. The author thanks Tristan Canare, Jess Manipon, Jessa Bacani and Monica Melchor for helpful inputs.