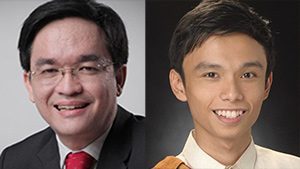 Under the 1987 Constitution, the primary government body mandated to guard national security and territory is the Armed Forces of the Philippines (AFP).

While remaining externally apolitical, the AFP has to create an internal culture of a stable environment. To be successful in carrying out sustainable programs, the institution also needs to sustain good governance within its organization.

Changing roles of the AFP

When the late President Ferdinand E. Marcos declared martial law in 1972, the military establishment grew in political prominence. The military was viewed with fear as Marcos’ private army. Within the institution though, cracks started with the AFP promotion system that was based largely on personal loyalty to the President.

Marcos chose his trusted military officer Fabian C. Ver in 1981 as chief of staff, who further instituted favoritism in the military to the disappointment of qualified officers. The tour of duty of favored military officers who should have been effectively retired was extended, causing internal grumblings.

In 1986, a faction headed by then Defense Minister Juan Ponce Enrile and AFP vice-chief of Staff Lt. Gen. Fidel V. Ramos broke away from Marcos. This led to the People Power Revolution that installed Corazon C. Aquino as president.

It was no surprise that in the immediate post-Marcos era, it was a challenge for certain military personnel to see a vastly diminished political role of the AFP in a civilian-led society. During President Corazon Aquino’s term, although the AFP remained largely loyal to her, various coup attempts were launched against her government either by some Marcos loyalist factions in the military or by military officers who helped her assume power. In contrast, coup attempts were practically unheard of during the time of her successor, Fidel V. Ramos, perhaps because he came from the establishment.

In early 2001, then President Joseph Estrada, who a year earlier ordered the AFP to launch an “all-out war” against the Moro Islamic Liberation Front, was removed from power in the two-day Edsa 2 People Power revolt.

Here, the AFP again played a key role with the then AFP chief of staff Angelo T. Reyes announcing a withdrawal of AFP support for Estrada.  Four years later, Gloria M. Arroyo, who finished the term of Estrada, won the presidency in a hotly contested election, which reportedly involved the participation of some military personnel. This fueled resentment that certain elements of the AFP practice partisan politics. The view of the AFP as a guardian of national security was further challenged with reported fat allowances received by military officers upon their retirement (which led Angelo Reyes to take his own life).

By far, the biggest shift in redefining the AFP role is its development of the 2028 AFP Transformation Roadmap (AFPTR), a 15-year strategy layout which will shepherd reform agendas and development goals.

The AFPTR’s two main priorities are capacity-building and personnel professionalization. It is further subdivided into three components: (1) Charter Statement, which is the core valuesand mission-visionof the AFTPR; (2) Strategy Map, which blueprints the institution’s concrete actions and end-goals in fifteen years; and (3) Governance Scorecard, which will be the evaluation material of strategies and plans. In essence, the AFPTR is a blueprint in laying out and executing strategies of the AFP until the year 2028.

The PGS, a local adaptation of Kaplan & Norton’s Balanced Scorecard, helps provide  organizations a mechanism to translate their visions into actionable and concrete strategies through measurable outcomes that will lead to the realization of breakthrough results which will make organizations more sustainable and more responsive. The establishment by the AFP of the MSGC (chaired by former Secretary Dr. Jesus Estanislao) highlights the AFP’s thrust in pursuing genuine reforms in the military, particularly in promoting good governance, while actively involving and engaging prominent persons (representing various sectors of society including the academe, media, commerce, other government agencies, and non-government organizations) in the implementation of AFPTR.

A clear area of reform in the AFP is in the rather short term of duty of the AFP chief of staff in the post-Marcos era.

In nearly three decades of the past four and incumbent presidents of the country, there have already been 26 men who have held the post of AFP chief of staff (with one in acting capacity, Nestor Ochoa). The President with the most number of persons serving as AFP chief of staff was Arroyo who had a total of 11 in a little less than 10 years. It was also under Arroyo’s term that Benjamin Defensor served as AFP COS with only more than 2 months in position. Note: Authors’ estimates based on media sources on duty periods of post-Marcos AFP Chiefs of Staff

President Benigno S. Aquino III has also continued this revolving door policy in appointing the chief of staff, with General Catapang being the fifth AFP chief of staff to serve under the term of PNoy. On average, thus, PNoy has appointed a chief of staff annually.

This period of duty for a chief of staff in the AFP is extremely fast-phased, especially in relation to other ASEAN countries like Malaysia, Indonesia, Singapore and to the United States of America, where the military leadership gives a service averaging three to four years.

Figure 2. Average Years of Services of Military Chiefs or Commanders in Select Countries 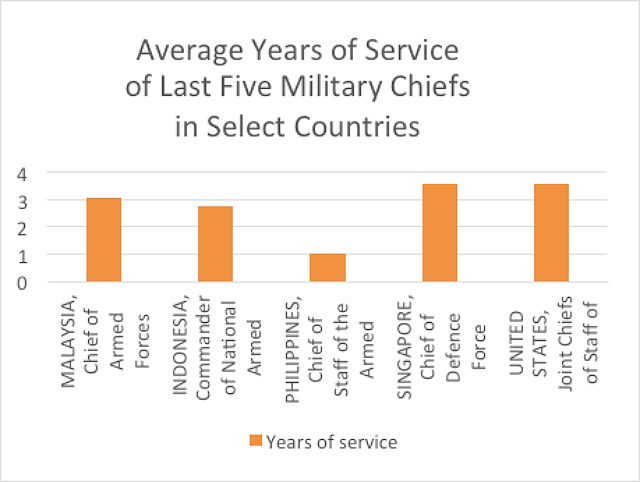 When a chief of staff is newly appointed, undoubtedly he will need some time learning the ropes in his new position. The lessons learned during this adjustment period will be crucial for the rest of his term.

If the chief of staff is immediately relieved from his duty, then whatever learnings may not be applied. Every person appointed as chief of staff could be merely adjusting to the new position, without being provided the opportunity to make the most out of his experience.

A chief of staff is expected to spearhead AFP projects. Each time someone sits in the post, not only does he receive the power, but the responsibility to act on it as well. However, with a very short term of duty, the opportunity of formulating policies and executing them is limited, especially those pertaining to long-term goals, targets and strategies (e.g. AFPTR).

From the year 2013, the AFPTR has already gone through the management of two chiefs of staff. Although Generals Bautista and Catapang seem to be of similar mindsets, especially as regards the AFPTR, it is clearly not to the benefit of the AFP to put long-term strategies such as the AFPTR at risk of not being carried through, under future leaderships.

Although all chiefs of staff of the AFP have relatively similar military backgrounds, each has his own set of principles, priorities, and reform agendas. Every appointee will have his own brand of organizational management.

A constantly changing leadership and institutional environment for the military could be detrimental to the AFP and its personnel. The officers may also be bound by the circular routine of adjustments. Constantly changing leaderships could lead to the lack of continuity that the AFP requires, especially given the current external threats to national security being faced today.

Need for a fixed term

Recognizing the need to have a fixed term for the CSAFP, two major steps, united by the same goal, were taken in 2011.

Both have the same reform agenda: establish a 3-year fixed term of office for the CSAFPs. Both section 1 of the two bills recognize the necessity and positive impacts of having a fixed term: “to give due recognition to the significance of the position of the chief of staff (and the 3 Major Service Commanders) of the Armed Forces of the Philippines (AFP) in order to promote the stability of the AFP as an institution thereby enabling it to perform its constitutional mandate.”

The two bills also reached their third and final reading. However, the President unfortunately vetoed the bill that aimed to curtail the revolving door policy on appointments to the chief of staff and improve governance of the AFP.

The President’s veto said that the bill was against Article 16, Sec.5 of the 1987 Constitution, which states that “Laws on retirement of military officers shall not allow extension of their service.” However, the President could select a future chief of staff whose term could fit 3 years, and the same goes for army, air force and navy commanders.

In previous times, even the superintendent of the Philippine Military Academy (PMA) had a tour of duty of three months, an extremely short period for anyone serious in making changes in the PMA, whether in its curriculum, or pedagogical practices.

Under the current legislative set-up, the Commission on Appointments also has the power to confirm all appointments of ranking generals and flag officers in the AFP. While there is sense to have such check and balances especially over commanders of the three services, and the AFP chief of staff and vice chief of staff, one wonders whether this practice of having would-be-generals go through the rigors of appointment processes in the legislature politicizes the military.

Clearly, the executive and legislative leaders will need to seriously work together in transforming the AFP into becoming more mission capable against internal or external threats to national security.

In the wake of emerging threats to national security, the country needs not only to have increased defense spending that includes investments in equipment for our troops, but also improved governance by which the military organization is directed and controlled.

Giving a fixed term to the AFP chief of staff, the commanders of the three AFP major services, and the PMA superintendent will be a mechanism to provide better opportunities in implementing necessary reforms in the military service, including the AFPTR, thus ensuring better governance for our national defense. – Rappler.com

Dr. Jose Ramon “Toots” Albert is a professional statistician. He is a Senior Research Fellow of the government’s think tank Philippine Institute for Development Studies (PIDS), and the president of the country’s professional society of data producers, users and analysts, the Philippine Statistical Association, Inc. for 2014-2015. He is also a member of the Armed Forces of the Philippines’ Multi-sectoral Governance Council.