In Thailand, a thug’s street wisdom

Jul 18, 2015 10:00 AM PHT
Patricio Abinales
Facebook Twitter Copy URL
Copied
Here are nuggets of wisdom from General Prayut Chan-o-cha, the head of the army who grabbed power last May 22, ostensibly to stop Thailand from spiraling into the darkness Meanwhile…. in Thailand, a different loyalty is being demanded of citizens by the general who runs the government. They are quite nastier out there, and more vulgar; compared to the Thai nationalist/monarchist, that racism of the bookstore owner F.S. Jose is, as they say in Tagalog, basang sisiw lang.

Yet, the bookstore owner’s narcissism does have some modicum of intelligence. The generals’ however, are quite dull…and funny! (Humor is absent among self-righteous racists; just look at Hitler).

So it was a delight to be sent by a friend these couple of truly wacky declarations by these militarists in their effort to legitimize their power grab. Here, for example, are nuggets of wisdom from General Prayut Chan-o-cha, the head of the army who grabbed power last May 22 ostensibly to stop Thailand from spiraling into the darkness.

Prachathai.com, an independent, non-profit news site based in Bangkok, compiled these Prayut quotes from different media sources in Thailand:

“We’ve got so much rubber in Thailand. Fine, go ahead and plant some rubber, and support it amongst yourselves. When they’re grown, go sell the rubber on Mars since everyone on Earth already bought so much. We’re gonna develop so much that we’re taking off for Mars.”

“Let me ask you, how are you gonna survive wearing a bikini in Thailand, unless you’re ugly?”

When limes are expensive, each household should grow them in a pot.

To solve the problem of expensive lottery tickets, they must be sold at 80 baht. If it can’t be done, then they have to stop selling.

In a drought, I want Thais to help each other dig ponds to collect underground water

“Why didn’t you tell me that the press always goes on and on about problems? You guys have to warn [the press] to not do that, because it makes you guys go and try to kick out officers. You gotta help me out here. Help me create understanding and consciousness. This is the media’s job. Your job isn’t just to relay facts or criticize. It isn’t!” 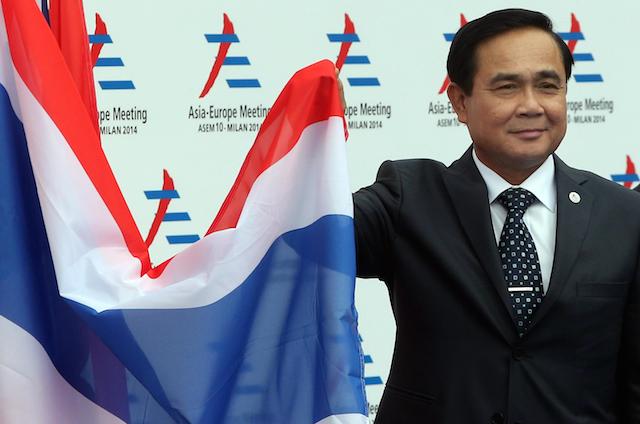 “You have to understand me. Whatever I did, I did with good intentions, and past events are done with. You guys just keep digging up graves and selling them. Don’t do that! It’s done and over with.”

“Can’t you guys cooperate with the authorities? Do you even know how? Do you? You don’t!”

“The media was taught to say facts, criticize, and warn. The government and the PM are public figures, so you guys think that you can just yell at me? Do I have to endure everything, and speak politely all the time? Are you just gonna force me to do that?”

“I already said myself that I wasn’t elected. So stop criticizing me so much, I get enough of that.”

When someone says the economy is in recession, don’t believe them.

To be able to compete in global rice market, Thais should consume more brown rice and organic crops.

“By nature, no one wants to commit crimes, so there is probably something causing them to do so, probably their mental and emotional state. They probably grew up without love and a caring household. They didn’t live according to the Sufficiency Economy, you know? So the idea of sufficiency wasn’t embedded into their hearts.” (Response to the report of motorbike gangsters harassing neighborhoods in the night)

“Deforestation has been going on for a long time so we can’t solve this problem quickly. Everybody must plant trees at the river sources and move away from that area, and that should do it. If we leave the forest alone, it will grow by itself.” (Announced on the government’s Return to Happiness TV Program)

If there isn’t much water, grow crickets or earthworms to sell for income.

“Tell me, how many workers are in Thailand? If we were to increase the wage, how much more must we spend? You gotta help me out and understand me instead of just pressuring and demanding for stuff. When I said no, you just started pressuring the workers instead, and now we’re all just throwing punches. Do you even know how to do anything else?…We have these problems but I’m not blaming anybody. So don’t say that I am, or I’ll get pissed.” (In response to workers’ demand to increase the minimum wage)

If you want the price of labor to increase, go and evaluate your ability at the Ministry of Labor.

“If you can’t afford seafood today, just eat something else first. If it’s too expensive for you, then just don’t eat it. Let rich people eat it. I can’t make everyone equal. I just can’t do that, you know? If you really want some, then work hard and make money. The government will do our part. We have provided markets for low-income people. We have done all that we are capable of. However, we cannot make everyone equal.”

If you want neighbors to be courteous (greng jai), buy submarines. (Response to the Ministry of Defense’s proposal to buy 3 submarines from China at 36 billion baht)

A longer list of quotes can be found here.

Pure fun…but scary one especially since the Thai urban middle class is applauding what this thug is telling the public. – Rappler.com