When her daughter first got her menstrual period, Hermie, an OFW in Paris, started including sanitary pads in the balikbayan box that she and her husband would religiously send home twice a year.

“Yes, her sanitary napkins are from Paris!” Hermie told me, her voice bursting with pride, when I met her while on assignment a few years ago.

Annually, an estimated 5.5 million balikbayan boxes – or about 15,000 boxes every day – are sent to the Philippines. The overstuffed boxes, sealed and mummified in packaging tape, have become the symbol of the Filipino diaspora.

As every Filipino who has opened a balikbayan box knows, unpacking its contents is similar to going on a treasure hunt. Bars of soap are stuffed inside shoes. Appliances, whether brand new or pre-loved, are swaddled in jeans and t-shirts. Odds and ends like bottles of shampoo, trinkets, and sanitary napkins are crammed into the box until every nook and cranny is filled.

For millions of OFWs who are separated from their families, the staples of the balikbayan box are symbols of affection that attempt to close the miles that separate them from their loved ones and serve as a substitute for their presence.

For migrant mothers like Hermie, sanitary napkins serve as atonement for the time lost and the milestones in her children’s life that she has missed – like her daughter’s first period – in the more than 25 years that she and her husband have been living in Paris.

For transnational families, or families who live apart, the balikbayan box is a symbol of love and all things left unsaid. In his ethnography of Filipino migrant mothers in Hong Kong, social anthropologist Clement Camposano described the balikbayan box as the performance of “diasporic intimacy” or the pursuit of a sense of domesticity when one is physically absent from home.

As it is mostly female migrants who send balikbayan boxes, Camposano notes that the staples of the balikbayan box – like bath soap, shampoo, and lotion – are items that cleave to the body and signify intimate everyday involvement of a migrant mother in the lives of her loved ones. Shopping for your family’s personal hygiene products may be a mundane chore but woven in the decision-making process behind it are memories of a loved one’s scent, the touch and feel of their body and hair – life’s very inscription of closeness.

As gifts also subliminally nudge loved ones into a desired behavior or reaction, the ritual of shopping also serves to recreate the migrant mother’s presence in her children’s lives. As Yolanda, another migrant mother, told me, buying clothing brands that are not readily available in the Philippines ensured that she would be remembered. “When my son’s friends notice that his shirt is nice, he will tell them, ‘My mother in Paris bought it for me,’” she said.

Mothers who leave their children

The Philippines is one of the world’s top suppliers of labor migrants, whose occupations run the range of domestic workers, seafarers, and nurses. Labor migration has reconfigured Filipino family structures, normalized transnational families, and altered our imaginations of what constitutes a “family.”

However, what has not been as quick to change are the gendered expectations of fathers and mothers who go abroad to work. When the migrant father leaves to work abroad, they are seen as honoring their parental responsibility while the migrant mother is perceived to be forsaking hers. Taking on the role of breadwinner has not absolved the migrant mother from her domestic responsibilities, rather, her absence has amplified them.

[Dash of SAS] The anguish of the migrant mother 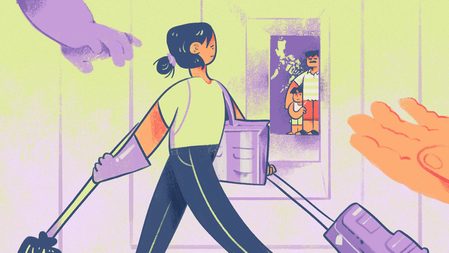 As sociologist Pierrette Hondagneu-Sotelo writes, “transnational motherhood contradicts notions of motherhood on so many levels that include forsaking deeply felt beliefs that biological mothers should raise their own children, and replacing that belief with new definitions of motherhood…such that the absence of the transnational mother must be constantly rationalized and justified.” Migrant mothers walk an emotional tightrope that is made taut by the time and distance that separate her from her children.

Losing their balance on the emotional tightrope made would mean judgement and social condemnation. As virtual parents, transnational mothers craft their own stylized rituals of “doing” motherhood, communicating affection, and simulating intimacy from a distance.

The carefully curated contents of the balikbayan box reinforce the migrant mother’s position as key decision-maker of the home, create a proxy presence, and offer tokens of love and reparation. The migrant mother’s absence is justified and her separation from her children is given meaning. In the process, narratives and judgement of them as mothers forsaking their maternal responsibilities are transformed into stories of mothers who would sacrifice everything – even being with their children – to give her family a better life. – Rappler.com

Ana P. Santos is an award-winning journalist reporting on sexuality, sexual health, and female migrant labor. She is currently pursuing a postgraduate degree in Gender (Sexuality) at the London School of Economics and Political Science as a Chevening scholar. Follow her on Twitter: @iamAnaSantos and Facebook SexandSensibilities.com