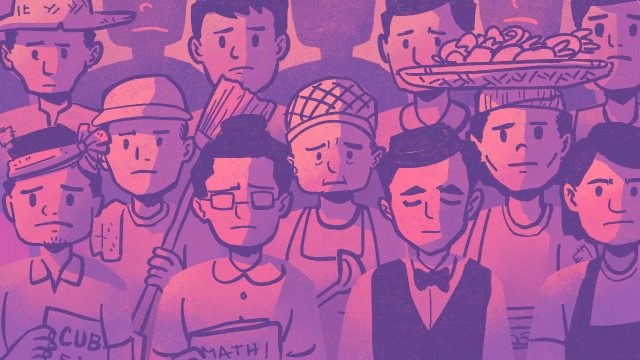 Facebook Twitter Copy URL
Copied
'Unfortunately, the Duterte government is so divisive, unilateral, and militaristic in its approaches to fighting this pandemic that it leaves out non-state actors and the people themselves'

In his fifth SONA, Duterte has no clear roadmap of how our country should holistically address the coronavirus pandemic, but had time to lash out against a senator, oligarchs, and threatened telcos, and said that he wanted the death penalty bill passed. (READ: Quick point-by-point summary of Duterte’s SONA 2020)

Duterte had no time to speak about addressing rising hunger and joblessness amid increasing COVID-19 positives, conveniently leaving out the poor. He is still in a state of denial over how grave this crisis has reached. (READ: What now? Netizens confused, disappointed after Duterte’s 5th SONA)

Around 5.2 million Filipino families or 20.9% of Filipinos found themselves without food to eat at least once in the past 3 months, according to an SWS survey. The survey also showed a trend in rising hunger, up by a total of 12.1 points from 8.8% in December 2019. Some 17.7% of Filipinos went jobless in April and 26% of businesses closed as of mid-July.

Already job and income losses mount and the poor find themselves increasingly unable to cope with hard times. COVID-19 leaves labor markets scarred due to the unusual nature of the shock and the potentially irreparable damage to small businesses and significant parts of the retail sector.

The pandemic is more of an income problem for households and financial and non-financial sectors’ ability to pay costs of doing business, and not because government is spending too much. The logical response then is for government to intervene quickly to help households and businesses to recover cash inflows relative to outflows to pre-pandemic levels.

Central banks around the world lend directly to governments or purchase government bonds to support COVID-19 stimulus programs. BSP has been buying government debt to finance the stimulus. Government for its part, by ramping up bond sales, provides risk-free assets to the private sector and mops up liquidity infused by central banks.

But government spending has been in trickles. The Philippines allocated an estimated P1.07 trillion ($19.765-B) for different COVID-19 response measures, both fiscal and monetary, as of July 13 according to the COVID-19 Policy Database of the Asian Development Bank. This equates to only 5.9% of the country’s GDP of $335-B in 2019.

Half of the total package, or P523 billion (48.8%), will go to government support for the income of households, businesses, and local governments. By end June 2020 however, only P355 billion has been actually released by government for COVID-19 response, as posted by DBM. This is an anemic and criminally liable response to a full-blown crisis.

What Duterte’s economic managers and the BSP are doing is running the risk of sacrificing the private sector’s financial stability to survive this crisis, all in pursuit of the holy grail of “good fiscal housekeeping.” Absent large current account surpluses and without significant fiscal support, the private sector will shift into deficit and deepen the recession.

What the SONA lacked was a comprehensive portfolio of fiscal measures for social protection, wage subsidies to businesses aimed at retaining workers, and subsidies to MSMEs like the P1.3-T ARISE bill. The CREATE bill reducing corporate income tax that Duterte wants passed is an indirect stimulus with inchoate results into the future that businesses might no longer enjoy if they close shop now.

COVID-19 is a shock to firms, which is outside of their control or their direct responsibility. Michael McMahon, an economist at Oxford University, points to the uncertainty as to how long the periods of isolation will last as an argument against loans, as they are “too much of a future burden for small firms to maintain employment if they face (nearly) complete shutdown.” Firms have no “moral hazard” question to answer in requesting insurance from the government.

Our country doesn’t lack laws for a pro-poor response to this pandemic. But it needs the trust and support of the people to make it work. Unfortunately, the Duterte government is so divisive, unilateral, and militaristic in its approaches to fighting this pandemic that it leaves out non-state actors and the people themselves.

Beyond the emergency subsidy program, transformative social protection should be integrated in public policy and economic calculations. These include striking a balance between measures designed to forestall shocks which can hurt the poor (e.g. trade and macro policy, preventative health care against epidemics); ex-ante measures which reduce the impact of such shocks once they happen (e.g. having different income streams for the poor, multiple skills set); and emergency measures which help those affected cope once shocks have occurred and have had an effect (e.g. social amelioration, cash for work).

Another important form of social protection outside state-funded transfers are the informal transfers (also called “bayanihan” transfers from the community, kin, religious groups, etc.). These range from private sector humanitarian efforts to online barter, and solidarity events through social media. This has to be promoted as concrete ways to cope with the pandemic, rather than these measures being unduly regulated and taxed by government.

The “public” character of this type of response is huge and creates a big impact. These programs deal with both the absolute deprivation and vulnerabilities of the poor. These programs would lead to increase equity and security in the face of shocks and life-changing events like this pandemic. Ordinary Filipinos have taken it upon themselves to provide relief operations, where the Duterte government failed in responding.

Labor market policies are also important social protection measures that involve wage subsidies during crisis to keep businesses afloat and save jobs. Also for unskilled manual workers, temporary jobs in the form of public works are given. It combines infrastructure building and the self-targeted provision of a minimal wage. But in this pandemic, except for TUPAD, we hardly expanded this approach. Former NEDA Secretary Ernesto Pernia pushed this idea a month into the lockdown to temper the effect on the economy, but did not prevail.

COVID-19 has a huge scarring effect on labor markets that a recession brings. The changing structure of labor markets – the gig economy and “zero hours” contracts – make existing social insurance like the Social Security System insufficient. What is needed is a comprehensive unemployment insurance policy, to help self-employed workers, gig workers, and the unemployed, so that they can keep afloat and pay their bills, even as their income streams dry up.

There is also a push by workers groups for universal basic income (UBI) as a transformative social protection measure. The core idea behind basic income can be anchored on Sec. 3 Article 13 of the 1987 Constitution – the “State shall guarantee the right of all workers to security of tenure, humane conditions of work, and a living wage.”

Living wage is the amount of family income needed to provide for the family’s food and non-food expenditures, with sufficient allowance for savings/investments for social security, for a family to live and maintain a decent standard of human existence, beyond mere subsistence level.

Another scheme is the basic income guarantee (BIG) as targeted cash transfers designed with a similar purpose but only for low income or poor individuals akin to the emergency subsidy program. Usually, the quantity is gauged for subsistence of the individual’s survival needs.

While UBI and BIG cannot meet the living wage definition, these are concrete measures to enable the poor to survive and not leaving them behind in a “new normal.”

Our Constitution is replete with provisions that provide for those who have less in life, especially in this pandemic. What is needed is the budget allocation to mitigate risk vulnerabilities and prevent exclusion of the poor in this crisis, thereby affirming their rights to these public funds. – Rappler.com