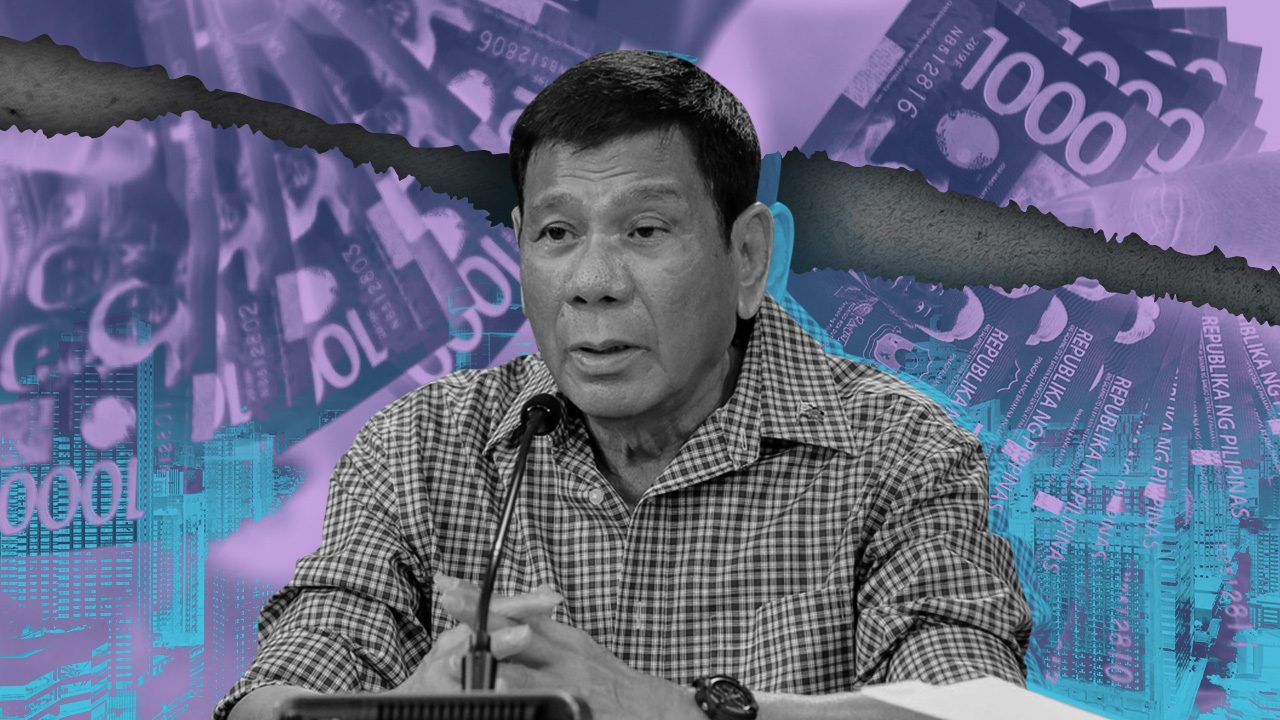 In September 2020, when President Rodrigo Duterte signed the Bayanihan to Recover as One Act (or Bayanihan 2), the government was in dire need of additional spending power to combat – or at least mitigate – the country’s worst health and economic crises in several decades. Bayanihan 2 expanded the government’s purse by about P165.5 billion.

The problem is, government is spending that money way too slowly. So slow, in fact, that in January 2021, Duterte had to sign a law extending the validity of Bayanihan 2 until June 30, to give more time to agencies at the forefront of the pandemic response.

Fast forward to June this year, and huge sums under Bayanihan 2 still haven’t been spent. And on June 30, Bayanihan 2 expired with Duterte hardly batting an eyelid.

Estimates of the unobligated funds vary. Presidential Spokesperson Harry Roque claimed it’s P9 billion, but some lawmakers said it could be more than twice that (P18.4 billion). Unspent funds, which are distinct from unobligated funds, are even larger.

Put simply, allowing Bayanihan 2 to die is bad fiscal management, and the height of incompetence and negligence.

Spending is too slow

The Department of Budget and Management posts status updates on the use of Bayanihan 1 and 2 funds on its website.

As of June 25, Bayanihan 2 allotted more than P205 billion across various agencies, but government was only able to obligate or contract out 91% of that, or nearly P188 billion. This means P17.3 billion has yet to be obligated.

Meanwhile, of the P188 billion obligated funds, government was only able to spend three-fourths of that or P141.5 billion. In short, government still hasn’t spent a whopping P46.4 billion. (Note that these figures may have changed already by end of June 30.)

The table below gives the details of underspending across agencies.

Sadly, the Department of Health (DOH) itself tops the agencies with the biggest unpaid funds: as much as P14.4 billion from the 2019 continuing appropriations, and almost P17 billion for continuous COVID-19 lab testing services and the hiring of human resources.

One program severely threatened by Bayanihan 2’s premature death is the monthly special risk allowance for health workers. But the DOH spokesperson claimed that P9 billion worth of these allowances were already released by June 29.

Another health program at risk is the hiring and training of contact tracers, although the Department of the Interior and Local Government (DILG) – the agency in charge – said it can use its appropriations in the 2021 budget.

As for unobligated funds, the Overseas Workers Welfare Administration (OWWA) tops the list, with as much as P3.85 billion unobligated for its Emergency Repatriation Program.

Even though some agencies reported 100% obligation and spending, the budget report as of June 25 must be taken with a grain of salt.

For instance, the Department of Transportation (DOTr) got P9.5 billion under Bayanihan 2, of which P5.6 billion was meant for the “service contracting program” which provides free rides for the commuting public. DOTr said it obligated its entire budget, but budget watchdogs and transport advocates claim that at least P3 billion of the service contracting budget has yet to be obligated.

A number of agencies also failed to give any spending report on Bayanihan 2 at all.

The actual unspent amount, said Roque, will be known by July 15 once agencies file their reports. But on June 30, he said only P9 billion remained unobligated, and boldly claimed that such a huge amount “can be obligated in one day.” How? In what universe?

In any case, the law which extended Bayanihan 2 until June 30 this year was quite explicit: the funds for release, obligation, and disbursement are available only until June 30. Funds that are obligated but unused or undisbursed by June 30 “shall revert to the unappropriated surplus of the General Fund.” In other words, the money will all go back to the Treasury.

Absent another Bayanihan 2 extension, obligating or spending such sums after June 30 would literally go against the law.

Mind you, it’s not as if government has no money to spend: in May 2021, revenues stood at P256 billion, while new borrowings amounted to more than P103 billion.

What could government have done?

Duterte could easily have called for a special session of Congress – after lawmakers had gone into recess – to enact a law that will further extend Bayanihan 2. But Duterte didn’t.

This is hardly the first time that Duterte acted too slow on Bayanihan 2. On August 20, 2020, Congress finalized the law’s text but Duterte didn’t sign it until September 11, or 22 days later. Our people are suffering, and 22 days is a long time to withhold government aid. Talk of lack of urgency.

Congress seems to have settled on the idea of revisiting Bayanihan 2 and other pandemic measures on July 26, when Duterte is scheduled to deliver his final State of the Nation Address. But until then, government is deliberately if criminally leaving many Filipinos in the lurch.

Some take the poor spending of Bayanihan 2 as an argument against Bayanihan 3, an even larger aid budget totaling more than P400 billion. But poor spending by agencies doesn’t remove the fact that Filipinos need significantly more aid than what they’re getting now. Bayanihan 3 will authorize such funds. (READ: Why Congress needs to pass Bayanihan 3 now)

In the end, Duterte’s failure to extend Bayanihan 2 adds one more line in the long and growing list of Duterte’s leadership failures during the pandemic.

Evidently, the “Bayanihan” in the law’s name is nothing but a scam. But what’s new? – Rappler.com