[OPINION] DepEd and the education crisis: Lost in the forest Marcos Jr. declared the recruitment to his cabinet of “the best and the brightest” as the signal achievement of his first 100 days in office.  The people he appointed will need more than 100 days to demonstrate performance proving him correct.  But the confusion about management decision-making on sugar importation, the foot-in-mouth statement of Sec. Bersamin on the issue of the use of public funds (assailed by Adolf Azcuna, like him, a retired Supreme Court justice), the hostage attempt on Senator de Lima in Camp Crame,  and the quick resignation or replacement of some key officials (Press, Agriculture, Executive Secretary) have already raised questions about the process he followed to identify best and brightest.

Were the same criteria, for instance, considered for all cabinet positions?  Or were some offices regarded as not critical enough to justify rigorous vetting and, therefore, available for disposal as political spoils?  Like the Central Bank, NEDA, and Foreign Affairs, the education portfolio arguably merited a technocratic appointment.  Marcos Jr. had a wide range of possibilities from which to choose.  He had options from among those already in public service. Sen. Sherwin Gatchalian has demonstrated a serious concern for education and as city mayor, congressman, and senator, has worked with civil society groups for its reform; Sen. Sonny Angara has shown a comparable zeal for education and seems determined to carry forward the education advocacy of his father, Sen. Edgardo Angara.  Or, Marcos Jr.  could have tapped candidates from those now holding top executive positions in the education sector.

Sara Duterte is a seasoned politician and local government executive.  Whatever her qualifications for public office, she had not previously distinguished herself in the field of education. More important, insiders say she harbored neither desire nor interest in the education portfolio. Once awarded to her by the president, however, it was an offer she could not refuse.  Her early policy concerns as DepEd Secretary have focused on the restoration of mandatory ROTC training and the unprecedented request for massive intelligence funds, hardly hardcore DepEd concerns.  She has made a bold promise, for a bargain basement price of an additional budget allocation of P100 billion, to solve the education problem in six years.   Like many of her father’s legacy pledges, this does not deserve to be taken seriously.

Finally, after four months, the new DepEd announced at a Senate hearing that the education system was in crisis.  The admission came from USec. Epimaco Densing III, who stressed that this was the assessment of Sara Duterte herself!  Not that we needed to hear directly from the VP/Secretary confirmation of an issue that has been a national concern for years, well before the pandemic attack.  But Densing might have clarified why she believed “we are lost in the forest right now because we are too theoretical in addressing learning loss rather than being practical and looking at the competent side of it.”  Hopefully, the senators understood what she meant and can explain this to the public.

Densing also listed Duterte’s crisis intervention plans: student profiling and grouping based on academic needs; increasing learning time; summer reading remediation programs; involving parents and guardians in the learning process.  The laundry list does not clarify the Secretary’s understanding of the challenges confronting her department. With 90 of K-3 children unable to read at grade level, the education crisis is unprecedented, but the proposed remediation measures are not new and some have been adopted before.  K12, at great cost, had already given DepEd two additional years of learning time. 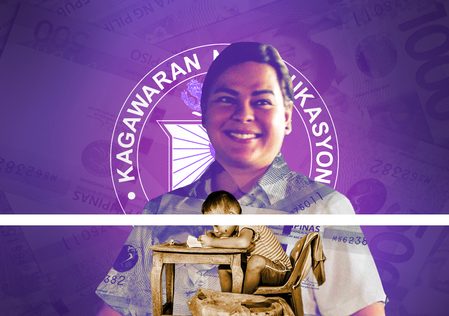 Profiling children at enrollment to cluster them in classes of comparable learning levels, which had been suggested before, deserves further attention and resources.  The task will require more time, resources and familiarity with academic tools probably not imparted to the present DepEd personnel.  Complaints about teacher workload and burnout even without these proposed projects, envisioned as supported by follow-up home visits for improve instructional monitoring, raise questions about the limits of in-service training.

Duterte also wants a national reading program for K-3 children, declaring, however, that “it’s up to the field to develop their own reading program through their Brigada Eskwela.”  Introduced two decades ago, Brigada Eskwela enlisted parents to contribute spare time over a period of one or two weeks before the reopening of the schoolyear to help their children’s schools clean up the classrooms and do minor touch-up repainting or repair work on walls and furniture.  It was never intended to anchor an undertaking as complex as a national reading program, which needs central coordination and control over an extended period; it cannot be just left “to the field.”  The pandemic proved that such educational tasks exceeded the capacity of most parents, especially among  C-D-E sectors, who must attend to paid jobs to make ends meet. To claim the return to face-to-face (F2F) schooling as her principal achievement in the first 100 days seems almost like taking credit for the coming of Christmas in December.  At some point F2F learning will happen; it has been happening all over the world.  Second, while DepEd should tell the public what it has actually done in the last four months to facilitate F2F classes, it cannot, on its own, decide that it is safe to reopen F2F classes.  Other agencies, mainly DOH and, perhaps, in specific places, local government units, will make this determination.  Finally, F2F instruction must resume, but it is not an adequate response to our education crisis.  Our dive into the depths of learning poverty happened under F2F conditions.

We should not expect quick and easy answers to our education crisis even from the best and the brightest.   Many groups want to help DepEd succeed.  But, as a start, they need to understand how DepEd has analyzed the problem and what it intends to do about it. – Rappler.com