After spending some time in the US — it’s my first trip ever — let me share this outsider’s observations.

One of the things that struck me throughout was the enormity of food portions. Virtually every meal was good for two to three persons, and too often I made the mistake of ordering too much food (much to the amusement of my new friends in the study tour I joined).

What is it with Americans and huge servings? Nearly everyone asks for a few boxes to take out leftovers — which they plan to reheat at home but almost never do, I’m told.

No wonder there’s so much food waste in America: latest estimates suggest that as much as 30-40% of America’s total food supply is wasted. This to me is mind-boggling, considering that we Filipinos always say whenever there are leftovers: “Think of all the hungry children out there…” The next thing that struck me the most was the jarring extent of homelessness.

In Washington, DC itself — America’s seat of power — I saw a number of homeless people wandering the streets and begging for alms inside fast-food places. Meanwhile, in Seattle, one could see entire tent cities lining the highways leading in and out of the city. Downtown, homeless people slept in sleeping bags under glaring lights while police stood nearby.

The fact that there are so many homeless people — more than half a million, according to conservative estimates — in the richest country in the world is, in itself, quite baffling. But even more so is the attitude of Americans toward the homeless.

You see, many people there — including some of my relatives, evidently — are of the opinion that homelessness is largely a choice: that depsite abundant financial aid and housing provided by the federal and state governments, some people choose to stay in the streets and live that way of life. Also, insofar as America is a land of equal opportunity, ending up homeless is widely viewed as a reflection on one’s lack of ingenuity or cunning or resolve. In short, “It’s on them.”

Yet this attitude neglects the fact that homelessness is also borne by bad government policies and — perhaps more consequentially — the privileging of those lucky enough to be “homed.”

[OPINION] Why the hate on the homeless? 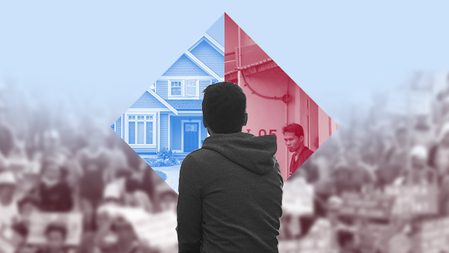 Data show that the US federal government’s investments in cheap housing have dwindled since the Reagan administration. And efforts to provide shelters and cheap housing for the homeless are often thwarted by the so-called “NIMBY” (Not in My Backyard) phenomenon. That is, most Americans are agreed that the homeless deserve houses — so long as such shelters and houses are nowhere near where they live.

The third thing that struck me the most was just how expensive things were.

From a taxi ride from the airport that held me back by P4,000, an American breakfast that cost nearly P1,000 (with an orange juice that alone cost P300), and carwashes that can cost about P1,500 — the expensiveness of America closes in on you at every turn.

This is not to say, of course, that everything is more expensive there. Many electronics, for example, are much cheaper.

On the one hand, high prices in the US hardly come as a surprise: prices do tend to go up significantly as a country becomes richer, what with ever higher demand. At the same time, wages and salaries rise over time, helping to explain inflation especially in services.

On the other hand, there’s also reason to believe that the high prices I was witnessing were abnormally high.

For starters, in March 2022 the US inflation rate jumped to 8.5% — the highest since 1981. That’s the same year inflation was viewed in the US as public enemy number 1, and the Federal Reserve (their central bank) hiked interest rates to record levels that led to a wave of economic downturns worldwide (including, indirectly, the Philippines). There’s a bunch of reasons for the current spell of high inflation in the US. One would be the severe disruptions to their supply chains, owing to logjams at the ports and a shortage of truck drivers, among others. During one breakfast at IHOP, there was a small sign on our table that read, “Due to nationwide supply chain shortages some of our products may be temporarily unavailable.”

Apart from this, there’s generally higher demand for goods and services due to the reopening of the US economy: masks were optional everywhere, and in many instances crowds were near or at pre-pandemic levels. Petroleum and food prices also surged owing to the ongoing Russian invasion of Ukraine.

But setting aside the short-term spike of prices, I can’t help but think that the general expensiveness of things lies as the root of many problems in America. Expensive homes crowd out the homeless, expensive health care crowds out the poor from healthcare services, expensive college fees crowd out students from universities.

Don’t get me wrong: the US is a wonderful place where the air tastes of possibility and opportunity. But I also realized I was witnessing capitalism not just with a capital C, but in all caps and bold typeface. – Rappler.com

JC Punongbayan, PhD is an assistant professor at the UP School of Economics. His views are independent of the views of his affiliations. Follow JC on Twitter (@jcpunongbayan) and Usapang Econ (usapangecon.com).