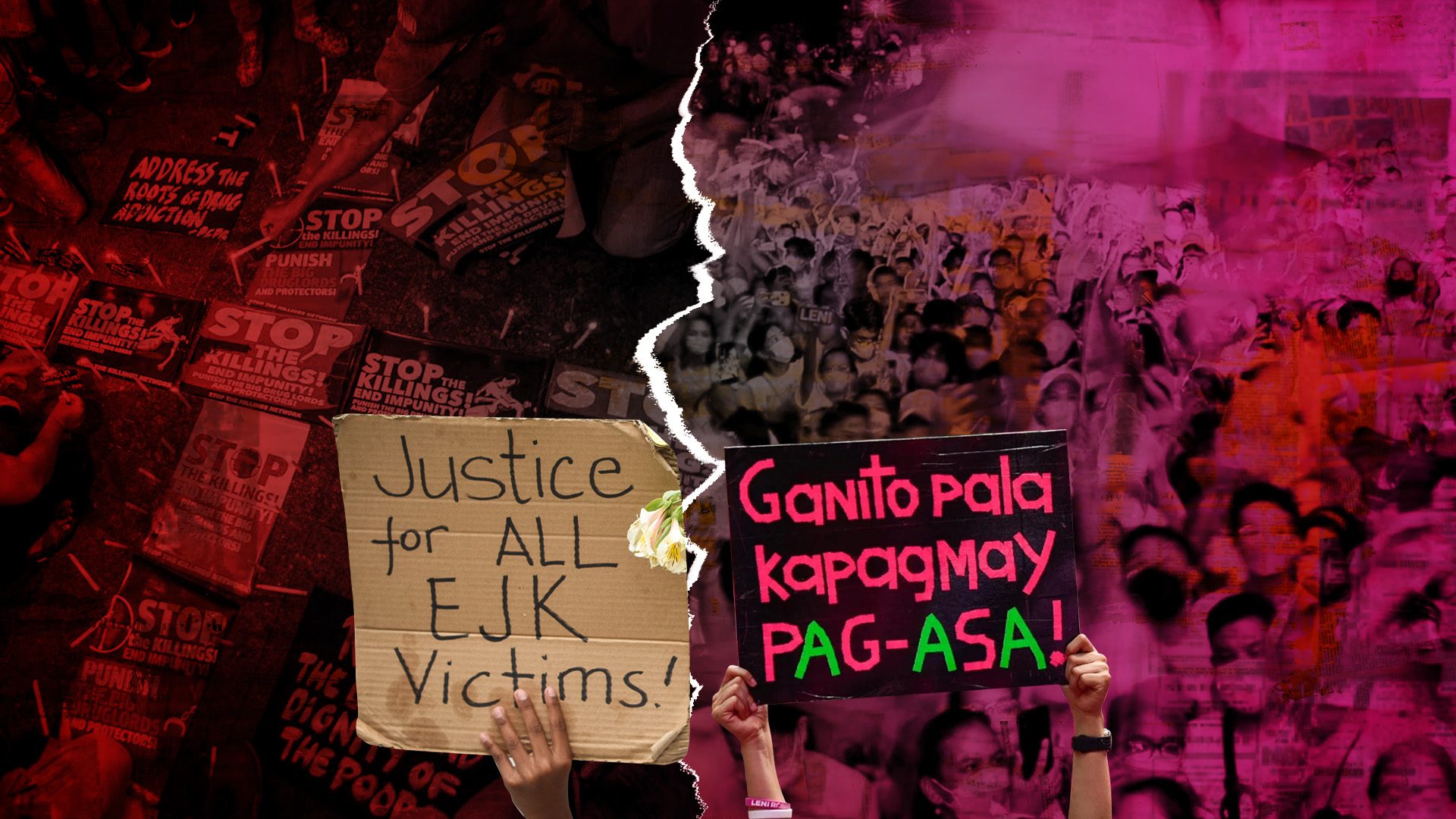 Facebook Twitter Copy URL
Copied
'As someone who covered the drug war and witnessed Vice President Leni Robredo's campaign, I couldn't help but notice parallel images in these events'

Another mother – a widow – has taken center stage as the country weeps for her and with her. Once again, the nation is grieving. Once again, fear, despair, and uncertainty enveloped the country as they did in mid-2016 when President Rodrigo Duterte unleashed a bloody war on drugs.

As someone who covered the drug war and witnessed Vice President Leni Robredo’s campaign, I couldn’t help but notice parallel images in these events. There seemed to be, I thought, eerie similarities or stark differences between Duterte’s first six months and last five months in office.

For one, unpredicted nighttime coverages have become a staple.

In 2016, it was to cover one of the country’s darkest chapters in history.

In 2022, it was to witness an organic people’s campaign unfold and fight to preserve our collective history.

Unexpected numbers of bodies turned up in the streets at night.

In Robredo’s sorties, these were warm bodies that filled venues with a massive crowd. With the drug war, these were cold dead bodies collected by funeral workers from their homes or dumped on the roads for passersby to see.

The police are disputing the actual figures once again.

Cops used to invite journalists to their so-called anti-drug operations and referred to these killings as “accomplishments.” But after the Duterte administration drew flak from the international community, the accurate number of killings now depends on who is talking. Human rights advocates say the victims could go as high as 30,000 to 40,000. The administration says it’s a little over 6,000.

The number of warm bodies that trooped to Robredo’s sorties was disputed, too – not because the numbers embarrassed her camp, but because the mammoth crowd, critics say, embarrassed the camp of her opponent and their allies, including politicians who promised Ferdinand Marcos Jr. at least 800,000 votes.

Manipulating drug war numbers showed the weakness of the campaign. Conversely, manipulating the crowd turnout in Robredo’s rallies showed the strength of her movement.

Placards were back on the street again.

There was nothing quite like ink or cutouts on paper to reflect the parallels of these events.

Once a tool of oppression in 2016, the placards came back with a vengeance by becoming one of the tools to express hopes and aspirations.

Witty and quirky puns written on cardboard captured the spirit of resistance in Robredo’s campaign. The placards, which carried hopes and dreams for a better country, were raised in the air for the Vice President to see and read. Sometimes, they used the placards to criticize the administration, too.

Of course, protest signboards were not new to rallies. But for the first time, a leader onstage would read them for the world to hear, allowing herself to connect to her audience and allowing the audience to feel seen by her.

Meanwhile, drug war placards were brutal, jarring, and grotesque. They may have been written in different dialects as they spread terror in neighborhoods, but they all carried a single message: death has arrived.

Jokes have it that one only needs to craft a “pusher wag tularan” cardboard and dump it before a dead body if one wants investigators to take their hands off a murder case.

The first and last months of Duterte’s term reflected the values that leaders inspire in or evoke from their supporters.

The drug war, which was carried out through Oplan Tokhang, “tokhang” meaning knock and plead, saw blood spilled on the streets of poor neighborhoods.

Five years later, Robredo’s supporters would embark on a house-to-house campaign to knock on doors and plead before voters to consider their presidential candidate and her slate.

Those who heeded Robredo’s call included mothers who lost their children in the drug war. Nanette Castillo told me that if the police were listening, she would like to say to them that the H2H campaign was the true essence of tokhang.

To say that hopes crashed when election results came in on May 9 is an understatement.

Fear, despair, and uncertainty enveloped the country once again. After all, the defeat of Robredo’s ticket did not only signify the return of the Marcoses to Malacanang. It also meant the extension of Duterte’s reign.

On May 13, hours before Robredo thanked her supporters in a massive thanksgiving rally at Ateneo de Manila University, Luzviminda Siapo exhumed the bones of her eldest child, Raymart, in a Malabon cemetery after the five-year lease on his niche expired.

Thousands waited for Robredo to show up the same way thousands of Filipinos sympathized with Siapo when she came home in 2017 to bury her son. Raymart was killed by unidentified armed men hours after barangay officials confronted him with an allegation that he sold marijuana.

Although Robredo did not directly contest the results, and Siapo refused a second round of autopsy for her son, both mothers hoped that the truth would come out soon.

Robredo said her legal team was already looking into alleged poll irregularities. Siapo, meanwhile, pinned her hope on Robredo’s victory. But with the Vice President’s defeat, she was left with no choice but to bank on divine intervention to nudge the conscience of Raymart’s killers.

For these mothers, there is no moving on, only moving forward. – Rappler.com

Aie Balagtas See is a freelance journalist working on human rights issues with a focus on the Philippine war on drugs. Follow her on Twitter (@AieBalagtasSee) or email her at aie.bsee@gmail.com for comments.