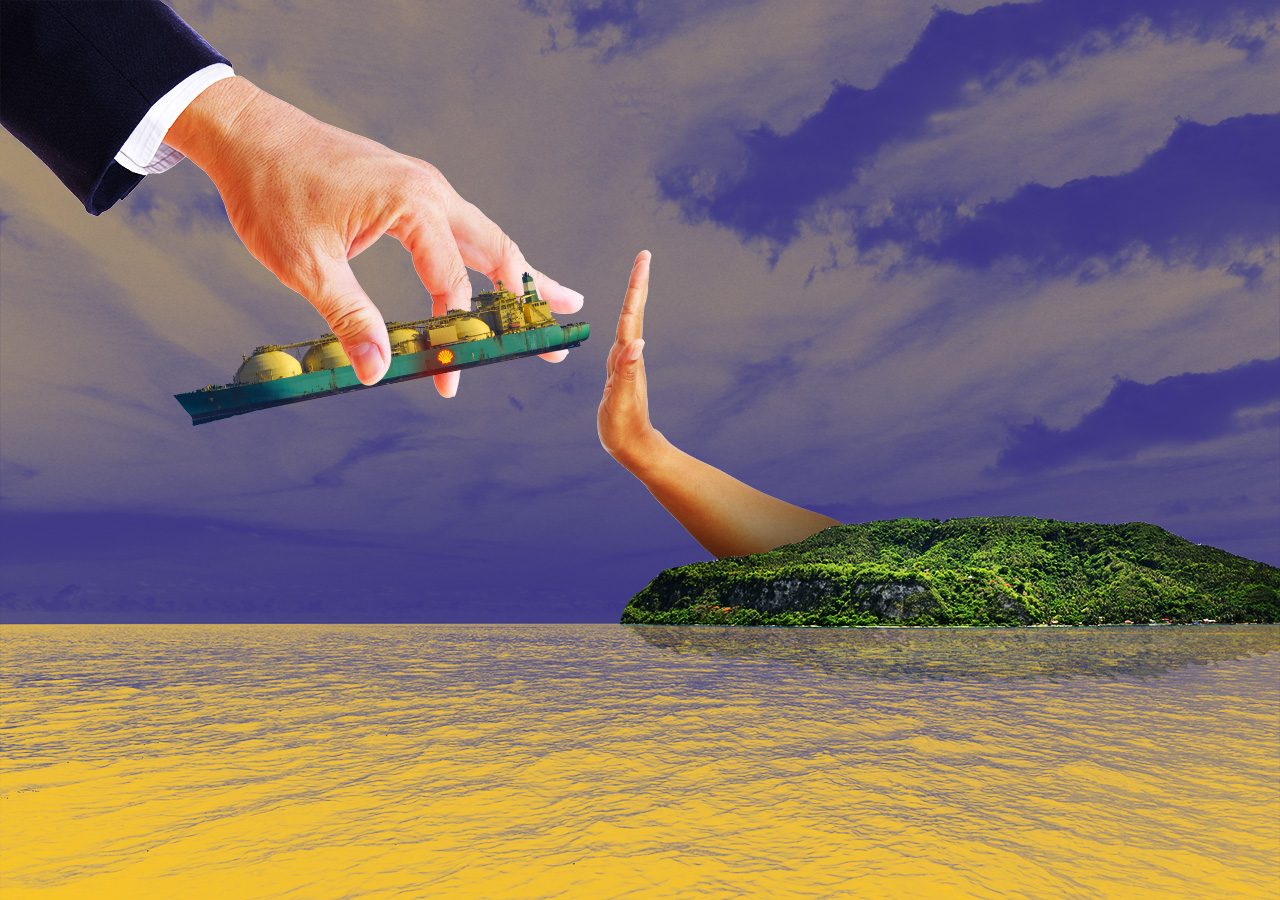 The United Nations Biodiversity Summit, known as COP15, reached a milestone at the end of 2022. Dubbed “30×30,” a landmark deal saw countries agree to work towards achieving the ambition of conserving 30% of the world’s land and 30% of the ocean by 2030. This signaled an intensified campaign for tackling biodiversity loss which our country has been suffering from in the past decades. However, it appears that the urgency of protecting life on earth still escapes the attention of corporations whose profits seem to outweigh any environmental responsibility.

As we enter the new year, my fellow advocates from the Protect VIP, a network of civil society and faith-based groups, youth, and community stakeholders committed to ensuring the incomparable Verde Island Passage whose biodiversity is akin to an “Amazon of the oceans,” brace for the long fight ahead of us.

Out to add yet another destructive project along VIP is Shell Energy Philippines. Shell aims to build a P3.5B ($6M) liquefied natural gas (LNG) import terminal in Barangays Libjo, Malitam, and Tabangao-Ambulong in Batangas, a facility that will aim to supply natural gas for power generation allegedly to address the impending depletion of the Malampaya gas field. The project comprises a floating storage and regasification unit with a capacity of 3.8M tons per year, conversion of the jetty, subsea, and onshore gas pipelines, and a pressure reduction metering station. Already a carbon major – that is, a company among the world’s worst fossil fuel polluters – Shell is promoting further pollution and destruction in the Philippines’ climate and waters with its massive gas project.

Shell has been under fire for years as one of the carbon majors linked to 71% of industrial greenhouse gas emissions since 1988, and has been mandated since 2021 by the court of the Netherlands to cut down its emissions by 45% from 2019 levels by 2030. A first-of-its-kind climate investigation by the Human Rights (CHR) has also revealed that there are legal grounds to hold carbon majors like Shell accountable for bringing about climate disasters. Originally, Shell proposed an LNG import terminal project in 2013 which was granted an Environmental Compliance Certificate (ECC) by the Department of Environment and Natural Resources. Due to development costs and market conditions, the project was put on hold. But Shell has now set its wheels in motion again with a public hearing, which Protect VIP strongly condemns due to the lack of information and significant effort to ensure meaningful participation of stakeholders.

It is clearly stated in our law that at the minimum, “people whose socio-economic welfare and cultural heritage are to be affected by the project especially vulnerable sectors and indigenous populations” shall be the audience of any project proponent’s information and education campaign. This wasn’t the case in Shell’s public scoping activity last August 23, 2022, where it failed to invite stakeholders including non-government organizations, people’s organizations, church representatives, hospital representatives, and fisherfolks that stand to be displaced. It is important to note that Shell has consistently failed to invite fisherfolk’s interest groups during the public consultations which will be most affected by the Exclusion Zone SEPH intends to put in effect around its LNG import facility’s Floating Storage Regasification Unit. Another glaring exclusion is that of the Badjao community, an indigenous peoples group whose lives and livelihoods depend on the sea. Isn’t it only just and fair for them to participate in such events when it is their source of livelihood that is on the line?

On its website, Shell proudly claims to “aim to be a good neighbor wherever we work, by contributing to the well-being of neighboring communities. We work closely with them to manage the social impacts of our business activities, address any concerns about our operations, and enhance the benefits that we are able to bring.” How can we entrust Shell to live to its word when it blatantly prohibits our participation? How can they work closely with the communities when we are not given a chance to have a public discussion on the impacts of their proposed project? How can they manage the social impacts of their business activities when they don’t listen to the voices of those who will be severely affected?

Protect VIP launched its #ShellOutOfVIP campaign last year to amplify its opposition to this gas project and others in the pipeline. This campaign puts forward the voices that must be heard – and which Shell ignored – to convey genuine representation and call for the protection of God’s creations. It is clear that to maintain the integrity of all ecosystems, human activities that contribute to the destruction of our common home must be stopped. As we embrace the promise of new beginnings that come with the turning of the year, so does our commitment to oppose destructive fossil gas projects. We begin the year driven by this conviction: Shell is not welcome in the Verde Island Passage. – Rappler.com

Fr. Edwin Gariguez is a long-term advocate for environmental justice and protection. In 2012, he was awarded the Goldman Environmental Prize for his work with grassroots movements in resisting destructive mining in Mindoro. Having served for a decade as Executive Secretary of Caritas Philippines, where he led the advancement of various environmental initiatives and programs, Fr. Gariguez now continues his work as Social Action Director of the Apostolic Vicariate of Calapan, board member of CEED, and lead convenor of Protect VIP.