Luhut: The general who has Jokowi’s back

Sep 27, 2015 8:31 PM PHT
Maria A. Ressa
Facebook Twitter Copy URL
Copied
'Many observers agree this new gatekeeping post was created for Luhut, a key voice in determining alliances and access to Jokowi. This becomes even more important now as the Indonesian government sprints to try to fulfill largely unrealistic expectations for its new president' 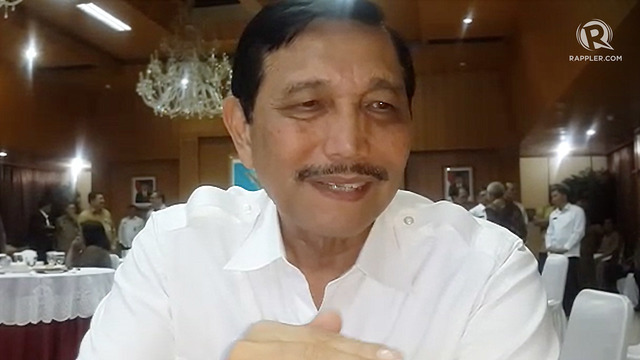 INDONESIA +SOCIALGOOD: The Social Good Summit in Jakarta. It will be livestreamed, live-blogged and live-tweeted.

JAKARTA, Indonesia – Speaking forcefully and gesturing towards the numbers on the large video wall behind him, 67-year-old Luhut Panjaitan outlined his government’s plan to strengthen Indonesia’s floundering economy.

I walked quietly from the back to the front of the large hall, noticing Luhut’s air of quiet authority. The years had been kind to him.

One of the most powerful men in the world’s fourth-largest nation, the former general, now Indonesia’s Coordinating Minister for Political, Legal and Security Affairs, has 6 ministers reporting to him, including those with the foreign, home affairs and defense portfolios.

Before this, he served as chief of staff of President Joko Widodo, widely known as Jokowi, for about 9 months.

Luhut has the ear and the confidence of Jokowi.

Many observers agree this new gatekeeping post was created for Luhut, a key voice in determining alliances and access to Jokowi.  For a short time, he held both posts at the same time.

This becomes even more important now as the Indonesian government sprints to try to fulfill largely unrealistic expectations for its new president. More than a year after his election, a cabinet revamp and policy changes try to lure in more foreign investors to the world’s third-largest democracy.

On October 26, 2015, Jokowi makes his first state visit to Washington to meet with US President Barack Obama. During his election campaign in 2014, Jokowi was often compared to Obama: he spoke plainly and captured the imagination of the youth of Indonesia, where 22 years old is the median age of its 250 million people.

After just two years on the national stage, a former furniture maker and small-town mayor took the reins of power in the country with the world’s largest Muslim population. Many observers lauded Jokowi’s win as the end of Indonesia’s transition to democracy that began in 1998 with the end of the nearly 32-year rule of strongman Suharto.

Jokowi is the first leader in Southeast Asia from outside the political and military elite. Hopes were high that as an outsider he could clean up corruption and pave the way for economic reforms in Indonesia.

That didn’t happen.  At least, not yet. 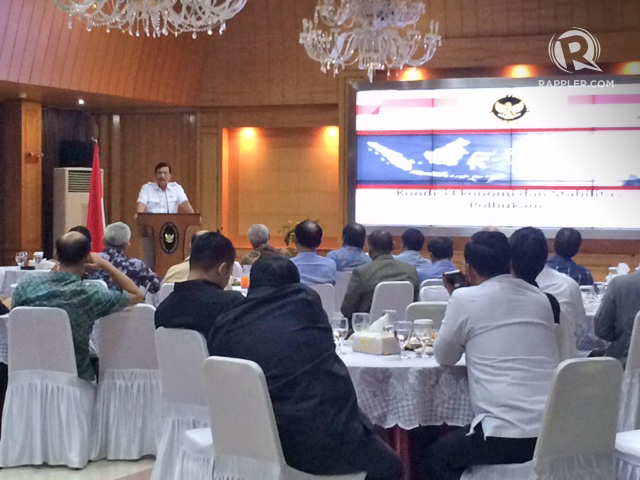 Luhut waved from the podium.

“Oh Maria, so many years! Good to see you!” said Luhut, breaking into English in the middle of his Bahasa Indonesia presentation addressing top editors of Jakarta’s news media.

I smiled and waved back. The room in this ministry didn’t seem to have changed much from the time former President Susilo Bambang Yudhoyono held the post 15 years ago.

I first met Luhut in the mid-90s, while he was Chief of Command Education and Training and shortly before he was named a 4-star general. I appreciated his openness and intellectual curiosity.

As a Christian general, he wasn’t at the center of power and didn’t have many of the perks of the Javanese. A keen observer of human nature and Indonesian to his core, he yearned for openness and progress, fascinated by the balance of security, economics and politics even then.

Soon after the fall of Suharto, Luhut left the military and was named Indonesia’s ambassador to Singapore from 1999 to 2000.  That was where he was when he helped me deal with the military’s scorched earth policy in East Timor.

A year later, President Abdurrahman Wahid, known as Gus Dur, named Luhut the Minister for Trade & Industry, a post he held for about a year until the People’s Assembly held a no-confidence vote that ousted Gus Dur and catapulted Megawati Sukarnoputri into power in 2001.

Although President Megawati offered Luhut the same cabinet post, he turned it down and left government. His explanation to me then was that it didn’t feel right because he felt he had a moral responsibility to Gus Dur.

I remember conversations about politics, much of which he shunned. 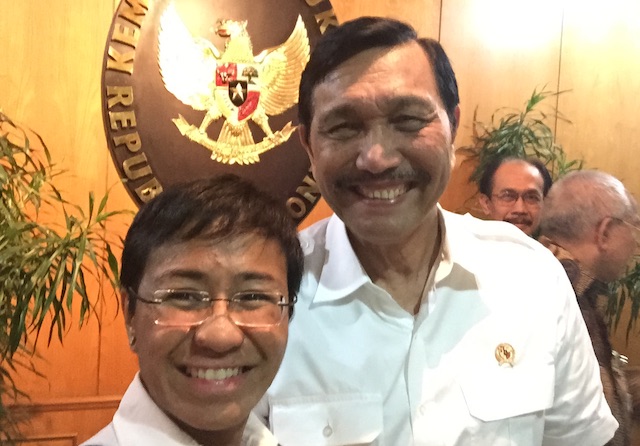 He became a businessman and built a fortune from a sprawling commodities group that focused on natural resources (oil, gas and mining), power generation (coal, gas and geothermal) and agriculture.

That was how Luhut met Jokowi: he invested in Jokowi’s furniture business and, later, in his political career as he helped Jokowi navigate the byzantine political alliances and processes that characterize much of Indonesian politics.

From the campaigns to the presidency, Luhut played a key role providing political cover to the novice leader: Jokowi was an outsider even in his own political party, the Indonesian Democratic Party of Struggle (PDI-P) headed by Megawati, the daughter of founding president Sukarno.

After Luhut’s speech, he joined our table and answered questions ranging from security to economics and politics.

Despite the ups and downs of the past year, Luhut told me he was convinced Jokowi could eradicate corruption precisely because he had no interests to protect. (READ: Is Jokowi finally starting reforms in Indonesia?)

One of the first steps Jokowi took as Indonesia’s leader was to cut then abolish the politically sensitive fuel subsidy dating back to the days of Suharto. In 2014, it cost the government 250 trillion rupiah ($19.6 billion) or 15% of a near trillion dollar budget.

There is a critical public works shortfall that you can see daily in often debilitating Jakarta traffic. The Wall Street Journalclaims there have been no new rail lines built since independence nearly 70 years ago (although I do remember BJ Habibie’s high-speed train to Bandung in the mid-90s).

“The infrastructure program is crucial,” explained Luhut. “This has never happened in the history of Indonesia. We allocated nearly US$10 billion, and next year, maybe $15 billion, with another increase the year after. If this can happen continuously, I think our economy is going to be much better two to three years from now.”

This is the long view, but right here and now, foreign investors are wary of what they see as protectionist tendencies and the nationalist policies of the PDI-P. Moves like the recent increase of import duties on liquor, cars and more than 1,000 other products are seen to hamper investments.

Luhut emphatically denied that was the reason.

“We’re not scared,” he said.  “We’re not protectionist at all because everybody has the right to enter Indonesia. It’s actually the other way around.”

Luhut said the new tariffs make it more expensive to bring in finished products because they want to increase foreign investment by encouraging actual production in Indonesia.

This would tackle a key challenge: to help move Indonesia away from its over-reliance on commodities and move it up higher in the value chain into the ranks of more advanced, manufacturing-based economies.

“I can assure you we don’t have any plans to close down. We are very open,” he added. “Especially Pak Jokowi, he wants to see us become very competitive. He said to me, ‘why not, Pak Luhut, if we can produce something efficiently, we can compete with any country.’” (Pak is an abbreviation of Bapak, a male honorific that shows respect).

The August 12 cabinet reshuffle which gave Luhut two powerful posts for about a month came after Indonesia watched its growth slip to a six-year low in the second quarter and its currency, the rupiah, fall to the weakest level against the US dollar in 17 years, levels not seen since the Asian financial crisis.

“We look at the global community,” Luhut explained, “it’s very fragile. Look at China, Europe. It’s not an excuse, but whether you like it or not, it influenced our economy. So right now, 4.67% (referring to GDP for the 2nd quarter), and I believe the 3rd quarter, we can grow maybe around 4.8 or maybe slightly higher.  In the 4th quarter,  I’m quite optimistic that we can grow around 5%, which is good for Indonesia.”

The key to making all that happen though is politics.

Although Jokowi won the elections, his opponent consolidated Parliament and pushed through policies that surprised his government.

That has slowly changed, and at the beginning of September, a political deal was sealed bringing the moderate Islamist National Mandate Party or PAN into the ruling coalition. PAN holds 49 of the 560 seats in the legislature, and this now gives the government a majority.

“Compared from January until today, it’s gotten better,” Luhut said. “The relationship between the President and Parliament is much better now. They still criticize the President, but at the same time, they support his programs if it’s good for the people of Indonesia.”