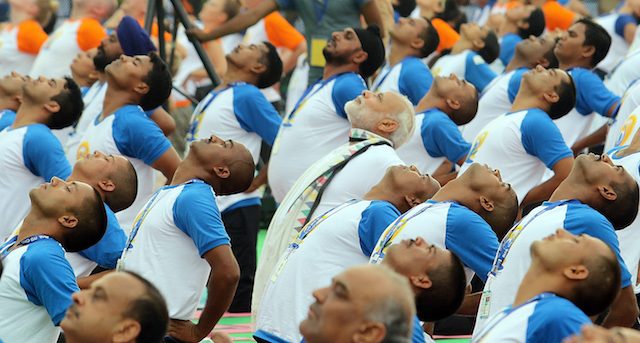 CHANDIGARH, India – Prime Minister Narendra Modi described yoga as a “people’s mass movement” as he took to the mat Tuesday, June 21, along with millions of others in India and overseas to celebrate the ancient practice.

Across India, schoolchildren, sailors, soldiers and bureaucrats bent and twisted their bodies from early morning at mass outdoor sessions to mark the second International Yoga Day.

Sessions were also held around the world including at the Sydney Opera House where colourful mats were spread outside the Australian landmark, while Afghans and foreigners gathered at the Indian embassy in Kabul.

Yoga-loving Modi, dressed in a white tracksuit, led more than 30,000 people in the northern city of Chandigarh where they performed poses and conducted breathing exercises at the outdoor Capitol Complex.

“Do not wait, make yoga a part of your life,” Modi urged in a brief speech to mark the event, an idea he successfully asked the United Nations to adopt.

“This is a day linked with good health and now it has become a people’s mass movement,” the 65-year-old premier said.

Modi took a short break to inspect the poses of his fellow yogis, who included students and soldiers, before returning to his spot.

His ministers were also dispatched to cities around India to stretch and bend alongside schoolchildren, while the navy tweeted photos of sailors on mats atop an aircraft carrier in Mumbai.

Modi, who credits yoga for his ability to work long hours on little sleep, has been spearheading an initiative to reclaim the practice as a historic part of Indian culture after his Hindu nationalist government came to power in 2014.

In his home state of Gujarat, more than 1,700 pregnant women performed the camel, cobra and other poses in hopes of setting a new world record, a local official said.

“The previous record was 930 pregnant women performing yoga simultaneously in China in 2009… we have submitted all documents to the officials of Guinness World Records who were here to evaluate the record,” district collector Vikrant Pandey told Agence France-Presse.

Modi last year led some 35,000 people in New Delhi to mark the first world yoga day, setting two world records – one for the largest yoga class at a single site and another for the greatest number of nationalities attending.

Since taking office, the premier has set up a ministry dedicated to promoting yoga and traditional Indian treatments, and started free lessons for his government’s three million bureaucrats and their families. – Rappler.com