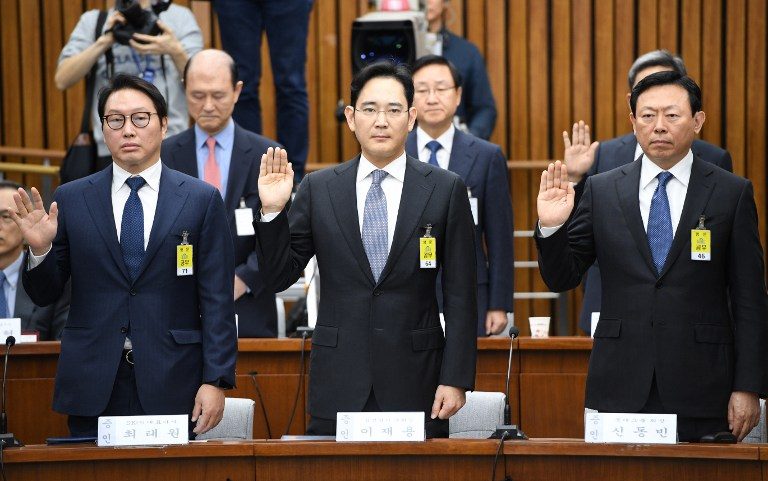 Millions watched in astonishment as the televised hearing showed the heads of the country’s 8 largest conglomerates being publicly chastised over donations their companies made to dubious foundations controlled by Choi Soo-Sil, a close friend of President Park Geun-Hye.

“Do you know anything?” one legislator chided Lee as he repeatedly claimed ignorance of who in Samsung authorized cash transfers to a foundation in Germany that funded the equestrian training of Choi’s daughter.

“Do you think you’re doing a good job as the head of a global company like Samsung by saying that you don’t know?” the legislator demanded.

The vice-chairman of Samsung Electronics and de facto head of the entire Samsung Group looked deeply uncomfortable as he sought to bat away questions with what sounded like rehearsed expressions of remorse and contrition.

“I have so many weaknesses and Samsung has things to correct,” Lee responded when asked if he agreed with the public perception that the conglomerates known as “chaebols” had knowingly connived with Choi.

‘We need to change’

“This crisis made me realize that we need to change ourselves,” Lee added, ignoring demands to answer the question and prompting one exasperated committee member to shout: “Stop giving ridiculous answers and excuses!”

Choi Soon-Sil is currently awaiting trial on charges of coercion and abuse of power. Park on Friday faces an impeachment vote in parliament which is almost certain to be adopted with the backing of more than 30 members of her own Saenuri Party.

Park is accused of colluding in Choi’s efforts to strong-arm the companies represented at Tuesday’s hearing into funding two foundations that Choi allegedly used as personal ATMs.

Samsung made the biggest contributions of 20 billion won (now $17 million), followed by Hyundai, SK, LG and Lotte, whose chairmen were also grilled at Tuesday’s hearing.

Their giant family-run corporations have dominated the export-driven direction of Asia’s fourth largest economy for decades. They all denied providing funds in return for favors but suggested they regularly came under pressure from high-level political circles.

“It’s difficult for corporations to turn down a request from the (presidential) Blue House,” said Huh Chang-Soo, chair of the GS Group and head of the Federation of Korean Industries.

Lee told the hearing that Samsung received many requests for funding, but “never provided support or gave donations in return for something”.

He also recalled Park pushing for donations during a meeting in July, but said there was no mention of specific foundations.

He denied any personal relationship with Choi Soon-Sil and, while acknowledging payments had been made that benefited her daughter, stressed that he had not been consulted.

“I will advise my aides to ensure something like this will never happen in the future,” Lee said.

The committee said it would seek to compel Choi to submit to questioning after she rejected a summons to appear on Wednesday on health grounds.

It was the first such hearing since 1988 when chaebol heads were questioned by lawmakers over donations to a slush fund for former military strongman Chun Doo-Hwan.

The current scandal has triggered massive street protests and lifted the lid on simmering anger over widening income gaps and resentment at the gilded life and privileges of the political and business elite.

Protesters outside the national assembly greeted the arriving industry titans with cries of “Lock them up!”

“It’s extremely rare for these people to be exposed to the public eye in this way,” Chung Sun-Sup, CEO of Chaebol.com, a website that tracks corporate assets and practices, told Agence France-Presse.

“People hate them for their behavior and envy them their wealth. For many, the sight of them being summoned to parliament for a grilling will be quite cathartic,” Chung said.

A number of the business leaders have fallen foul of the law before, including Hyundai’s Chung Mong-Koo, who was convicted of embezzlement in 2007. – Rappler.com