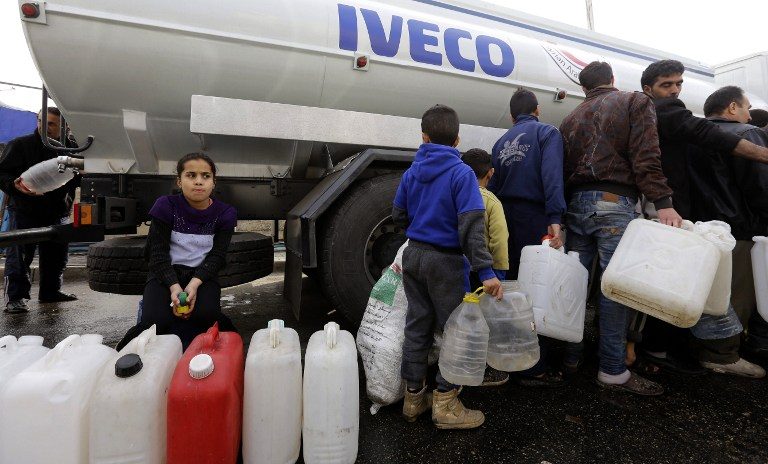 Facebook Twitter Copy URL
Copied
'Two meetings are taking place both in Ankara and now probably in Moscow too, which will be discussing this aspect because … water in Damascus is vital,' Staffan de Mistura tells reporters in Geneva

Fighting in the Wadi Barada region near Syria’s capital has damaged water infrastructure and left some 5.5 million people in the capital and its suburbs facing shortages, according to the UN.

“Two meetings are taking place both in Ankara and now probably in Moscow too, which will be discussing this aspect because … water in Damascus is vital,” Staffan de Mistura told reporters in Geneva.

He said that the UN had been informed that the Damascus government had reached a deal with five villages in Wadi Barada to solve the problem, but two villages had refused the arrangement, including the one holding the main water source.

“Therefore, there is a danger, substantial danger, imminent danger that this may develop into a further military escalation,” de Mistura said, warning that “the consequences, unavoidably (will be) no water solution for the people in Damascus.”

On Wednesday, the provincial governor in Wadi Barada said Syria’s government had reached a deal for the army to enter a rebel-held area near Damascus and restore the capital’s water supply.

Opposition sources denied there was a deal.

But the rebels say regime strikes damaged pumping facilities and deny that Fateh al-Sham, previously known as Al-Nusra Front, has forces in the area.

There are already clear signs of escalation in the Wadi Barada areas.

Violent clashes were underway there Thursday between regime troops and fighters from the Lebanese Hezbollah group and rebel forces, the Syrian Observatory for Human Rights said.

The strikes came despite a nationwide truce brokered by regime supporter Russia and rebel backer Turkey that has been in place since December 30.

The truce does not include Fateh al-Sham, or the Islamic State group.

The ceasefire has brought quiet to large parts of the country, but sporadic violence has continued in some areas.

De Mistura voiced disappointment Thursday that the ceasefire, while largely holding, had not made it any easier to deliver desperately needed humanitarian aid.  – Rappler.com