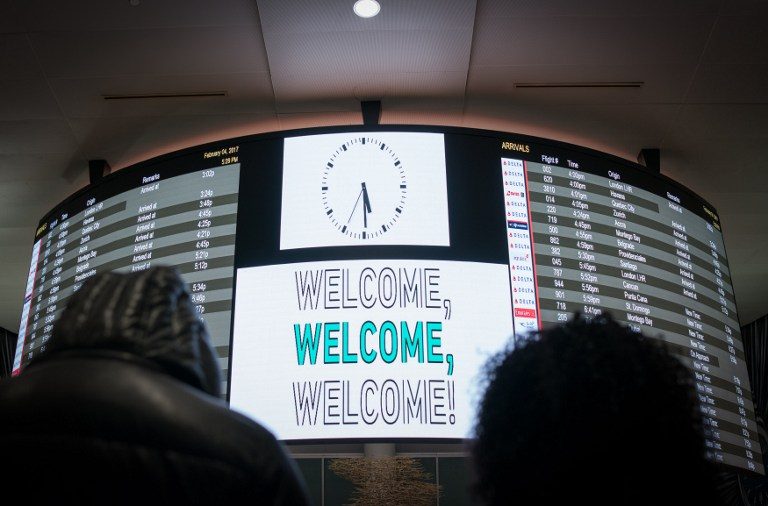 Facebook Twitter Copy URL
Copied
US immigration levels are similar to those in 1890, with one change: Most immigrants are from Asia and Latin America, not Europe

NEW YORK CITY, USA – Historians credit immigration for contributing to US growth, but the phenomenon is increasingly controversial, sharply dividing government officials and the public. A recent survey finds 1/5 of Americans support an increase with the rest divided, 38% each, between a decrease and maintenance of current immigration levels.

During the country’s first century, Congress did not enact limits on immigration and migrants arrived from Europe, Africa and Asia. Subsequently, in response to objections over numbers and kinds of new immigrants, the federal government engaged in perennial reform efforts, which are once again in full swing.

Current reform proposals encompass a range of policy options – including calls to repatriate those residing unlawfully in the country and impose substantial restrictions, including a moratorium on immigration, which would stabilize the country’s population.

During his presidential campaign, President Donald Trump promised to dramatically scale back legal immigration and deport the roughly 11 million migrants residing unlawfully in the country. If those repatriations take place, the demographic result would be a 3% decline in the country’s population and a 5% decrease in its labor force – with farming, building/ground maintenance and construction/extraction hit hard. Trump has so far deported in his first 6 months about 100,000 immigrants, about 1%. The number of deportation cases in federal immigration courts waiting to be completed surpassed 610,000 through June.

Large-scale deportations are unlikely to occur, though the threat terrifies entire communities. In addition to nearly 2/3 of Americans supporting legalization of unauthorized migrants, growing numbers of political leaders, including Trump, speak out in favor of possible paths to legal status, especially for those who arrived in the country as children. Trump has now given Congress six months to pass a legislative solution to replace the Deferred Action for Childhood Arrivals, or DACA.

A moratorium on immigration, again an unlikely event, would have a large and amplifying impact on US population growth. For example, with no further immigration, the US population projected for 2060 would be roughly 70 million less than with continuing immigration. Also if immigration were halted, the projected population would peak after about 25 years at 343 million before slowly declining to about 340 million by 2060.

Two senators, supported by the Trump administration, introduced the RAISE Act – Reforming American Immigration for Strong Employment. In addition to lowering immigration levels up to 50%, RAISE  would follow Canada’s lead in establishing a merit-based point system based on education, ability to speak English, high-paying job offers, age, achievements and entrepreneurial initiative. Refugee numbers would drop to 50,000 per year. The act would end the visa lottery and the diversity visa program. Immigration levels would be reduced by curtailing family-sponsored migration – only spouses and minor children could accompany immigrants, and parents could enter the country on a renewable temporary visa, but would not be eligible for government benefits or citizenship status while required to purchase medical insurance.

Lowering immigration levels by 50% would slow population growth. By 2060, for example, the US population based on lower immigration levels proposed by RAISE would be 380 million versus 417 million. Proponents, suggesting the act could save taxpayers billions of dollars by reducing costs linked to low-skilled immigration, point out that legal immigrants lacking a high school degree typically receive $4 in government benefits for every $1 paid in taxes.

Attempts to reduce immigration and US population growth are not new. In the early 1970s the US Commission on Population Growth and the American Future recommended the gradual stabilization of the nation’s population. In the mid-1990s the US Commission on Immigration Reform recommended reducing immigration levels by half, scaling back family migration and focusing on high-skilled migration. Groups concerned about negative consequences for the environment also called for reductions.

Business leaders, economists, government officials, and ethnic and social organizations oppose reducing immigration levels as proposed by the RAISE Act. Some call for more immigration rather than less. Given the country’s record low rate of natural increase of 0.4% in 2015, they consider immigration as essential for prosperity and innovation. Economic studies demonstrate fiscal benefits of immigration, expected losses without immigrants and increased risks of recession from restrictions. One study, for example, concluded that US immigration from 1990 to 2010, both legal and illegal, produced net benefits to Americans worth $50 billion a year. Pro-immigration advocates emphasize the high numbers of talented international students enrolled in graduate programs in US universities – representing 70% of students in electrical engineering and 63% in computer science. Yet visa caps limit many of these students from contributing to the economy after graduation.

With or without immigration, both the number and proportion of America’s elderly are expected to increase markedly during the 21st century. By 2060, irrespective of whether or not current immigration levels continue, about 25% of the US population is projected to be aged 65 years or older versus 15% today.

To avoid inevitable aging would require high immigration levels sustained over time. Maintaining the current US support ratio of about four working-age people per elderly person throughout the 21st century requires about a tenfold increase in current immigration levels. Such an increase would result in extreme US population growth, reaching 940 million by 2060 and 1.6 billion at the century’s close and making the United States the world’s most populous nation.

Low fertility levels contribute to the country’s aging population. With few exceptions, America’s birthrates over the past 40 years have been below the replacement level of 2.1 births per woman. The latest estimate for 2016 at 1.8 births per woman is the lowest since 1984.

Given that the cost of raising a child in America is about $250,000, many Americans choose to remain childless or limit families to one or two children. Moreover, even if fertility rates were to increase markedly, it would take at least two decades for those additional children to be old enough to join the labor force.

Taking into account America’s demography, economy and politics, the chances of the government enacting comprehensive immigration reform soon are slim. Consequently, future immigration will most likely continue at more than a million annually and basically adhere to current admission guidelines. After a half century, those assumed levels of immigration will result in an additional 90 million people and a population of more than 400 million.

Under such assumptions, the US immigrant population could increase from 43 million to 78 million by 2060, a record high. It would also set a record high for the percentage of foreign born at 19%, breaking the record of 15%, set 1890 when the US population was 63 million, 9 million of which were immigrants.

Throughout US history, a major driver behind population growth has been immigrants and their descendants. Those who resist immigration will struggle mightily to alter the basic laws of demography. – Rappler.com

Joseph Chamie is an independent consulting demographer and a former director of the United Nations Population Division. This piece was first published by YaleGlobal Online.